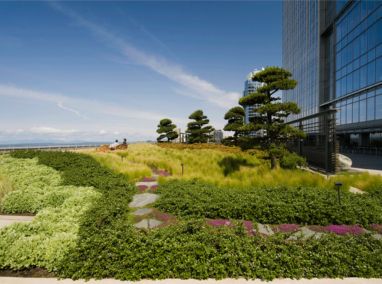 The Russell Investments Center is located at 1301 Second Avenue, 18th Floor, Seattle, WA 98101; 206.505.7877; http://www.russellinvestmentscenter.com/; see the building page. Read these articles: November/December 2013 Analytics: Tracking a Green Roof by Russ Klettke in gb&d and the November 4, 2013 Tracking A Green Roof from PFS Studio. See the 2007 ASLA Professional Awards profile with a great write-up and many photos. Learn about American Hydrotech in The Greenroof & Greenwall Directory.

Formerly owned by Washington Mutual Bank, who built the green roof before dissolving in the financial crisis of 2008, the Russell Investments Center tower boasts forty-two stories of Class A+ office space at Second and Union in downtown Seattle. On its completion, the then WaMu Center was the largest skyscraper to mark Seattle’s skyline in nearly 15 years. Currently it is the city’s 6th tallest building, at 182 meters (598 ft). JPMorgan Chase took ownership of the building when it bought WaMu from the FDIC, but sold it a year later to Northwestern Mutual of Milwaukee.

Sweeping, unparalleled views of Elliott Bay, the Olympic Mountains, Mount Rainier, the Space Needle and downtown Seattle are visible from just about any place in the building, especially off the landscaped deck which is available to all building tenants. Russell Investments Center boasts a perfect 100 ENERGY STAR score, making it the most efficient high rise in Seattle and a candidate for LEED-EB Platinum status.

“PFS’s concept integrates elements that relay the story about the center, its local origins and the community it serves. The project presented a rare opportunity to reference the varied and unique landscapes of Washington State, from its coastal beaches to the Olympic and Cascade ranges and the interior plateau,” (PFS Studio, see below).

In 2007 Phillips Farevaag Smallenberg received an Honor Award from the American Society of Landscape Architects for the Washington Mutual Bank project. “The landscape architect for the project developed design concepts for the roof 17th floor roof deck in close collaboration with the architect and project engineers. Curtain walls and seating at the building edge further connect the garden to the interior lounge creating a seamless indoor-outdoor experience. Key collaborative efforts included working with architects, interior designers, and structural engineers to develop an outdoor fireplace, boulder outcroppings, and windscreens into a fully integrated landscape and building design.

“As a result the garden has already become the most vital social and event space for the client’s central downtown campus. Planting, pathways, and wood decking were designed to symbolically represent the diverse landscapes of Washington State. As almost two-thirds of the deck is planted with predominantly drought-tolerant and native plants, the 17th floor garden has already gained the reputation as one of Seattle’s largest green roofs,” (ASLA, 2007).

“The plan called for a diverse plant system that would be aesthetically pleasing and attractive to employees, effectively turning the concept of the windowless employee lunchroom inside out. Native pine trees, bamboo, and grasses fit the site conditions with cross-cables in the shallow, 12- to 36-inch-deep soil to brace trees against those occasional windstorms. A hat-like partial roof protects plantings from downdrafts along the curtainwall that rises above the garden to the top of the building at 42 stories,” (gb&d, 2013).