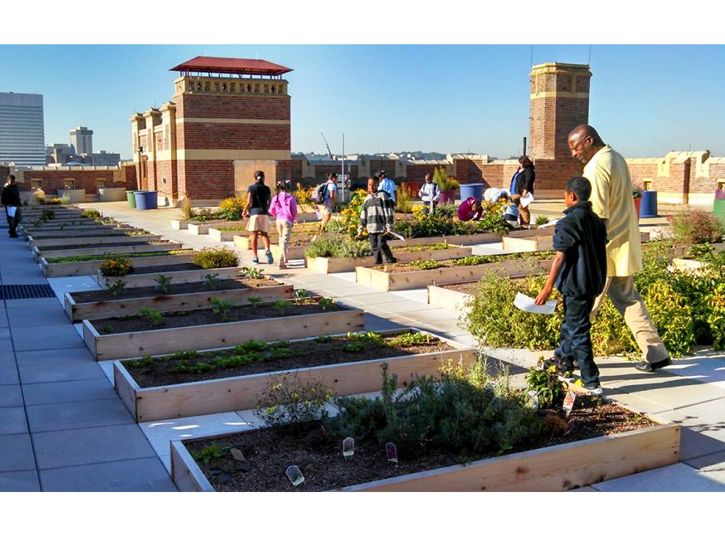 Watch the 1:53 video Rothenberg Rooftop Garden – Project of the Week 11/3/14 from Greenroofs.com on the greenroofsTV channel on YouTube.

Located in the inner city Over-the-Rhine neighborhood of Cincinnati, Rothenberg Preparatory Academy offers education from Preschool through 6th Grade and according to their website “is a redesigned neighborhood school offering a challenging curriculum and numerous, exciting enrichment opportunities that make learning fun.” Previously languishing in vacancy and deterioration for years prior to rehabilitation, the building’s design is a prime example of Cincinnati’s rich architectural heritage, full of beautiful bas reliefs and artwork.

The Over-the-Rhine’s 360 acres is one of the largest, most intact, nineteenth century urban historic districts in the United States and is believed to contain the nation’s largest contiguous collection of nineteenth century Italianate Architecture. In 2006, Over-the-Rhine was placed on the National Trust for Historic Preservation’s list of the “Eleven Most Endangered Historic Places in America.” Over-the-Rhine made the list for two reasons: its national significance and its threat of destruction,” (Over-the-Rhine Foundation).

More than six years in the making, the Rothenberg Rooftop Garden has been a labor of love for many. This historic school built in 1914 was slated for replacement in the Cincinnati Public School system. Wanting to preserve its history, in 2008 the Over the Rhine Foundation (OTRF) took special interest in the school as did the community. Seeing its architectural beauty and knowing that it was a vital inner city school, the Cincinnati Public School Board agreed to renovate instead of tear down the historic building even though they knew it would cost much more to renovate. The Rothenberg Preparatory Academy re-opened to students beginning with the 2013-2014 academic year, and the neighborhood is humming.

The standard for all Cincinnati Public Schools being built is to achieve LEED Silver and this renovation would be no exception; it is slated to receive LEED Silver certification. Beautiful murals and artwork depicting aspirations, ethics and direction decorate this four story building, and the roof seemed to be a natural fit for a garden. Sitting at the north end of downtown, the roof has a spectacular view of the city and surrounding historical buildings. Due to space constraints, the 8500 sf roof was formerly used as the playground at the beginning of the 20th century. Thorough testing had to be done to make sure the structure would hold the additional weight load.

The OTRF immediately began fundraising for the rooftop garden, a gift it would give the school. Urban activist and Project Manager, Pope Coleman, started collecting money and people to make this dream a reality. The Rothenberg Rooftop Garden, LLC (a non-profit) was developed made up of people from the community, educators, architects, gardeners and business people. Their goal was to raise enough monies to not only build the garden, but to also fund its operation and provide a teacher to specifically work with students and staff. Five years of planning, school renovations and fund raising construction began for the rooftop garden in 2013.

There was a push by Tecta America Zero Company and Green City Resources to get everything completed before the students returned in August, 2014. Working together daily, the paver system and garden beds were installed within 4 weeks. After many private donations and the hard work of several people, the first phase of construction was complete.

A Carlisle membrane had been installed during the renovation. Special attention had to be taken with the drains and scuppers. No aggregate was used on the roof and considerations were taken into account about small openings that little fingers could get into. A new elevator was installed that would take people to the roof.

Thirty five planting beds of various sizes cover the Rothenberg Rooftop Garden, at 9 inches deep with rooflite® Intensive Ag growing medium; it was the first time this mix has been used in our area. Along with a concrete and soft tile paver system on the rest of the roof for community gatherings or school activities. The school is thrilled with their gift and every teacher has chosen to integrate the garden program into their curriculum.

Vegetables are currently being served in the cafeteria from the rooftop garden and the students love them. It has been a true success story with so many supporters, the community and the school all striving for the same goal: enriching a child’s life through nature. Fundraising is an ongoing process for the garden – plans for a shade awning, green walls, and furniture are in phase two. But, the students don’t seem to mind that they are working with a bare minimum right now; it’s thrilling to fuel their imagination and watch them discover new things.

“The Rothenberg Rooftop School Garden seeks to provide and sustain unique learning opportunities for the students of Rothenberg Preparatory Academy through hands-on garden-based lessons; and to engage community members in rooftop activities through the school’s function as a Community Learning Center. Integrated with math, science, and language arts, the rooftop garden program creates opportunities to enrich student’s learning, develop critical thinking skills and foster stewardship of their surroundings and community,” (The Edible Schoolyard Project).