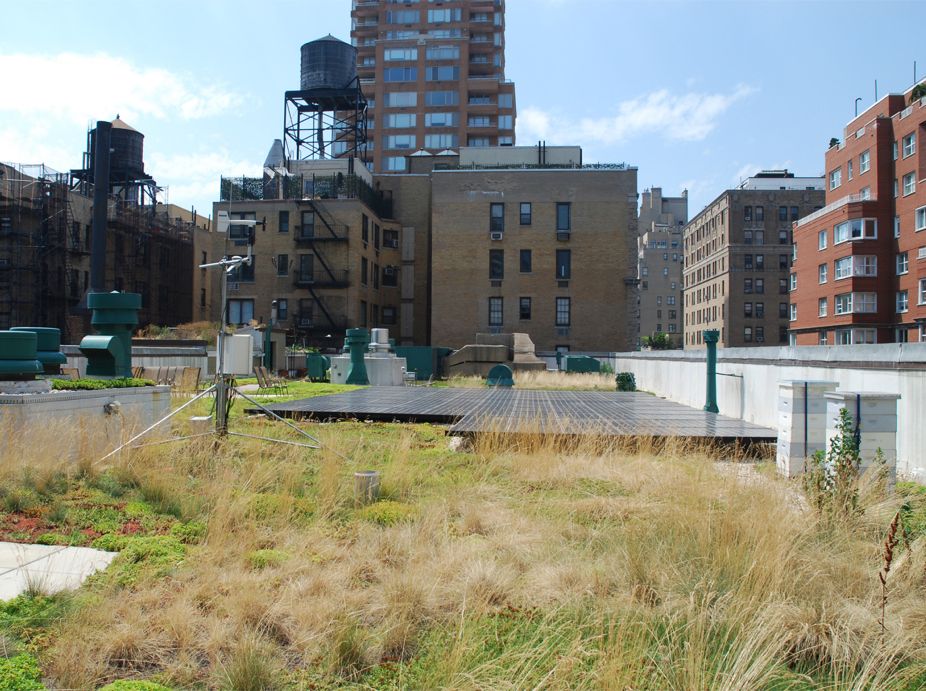 Regis High School is located at 55 East 84th Street, New York, NY 10028; 212.288.1100; visit their website; Green Roof page; and their live Green Roof Data page. Watch the 2:19 Regis High School in New York City – Project of the Week 9/7/15 video from Greenroofs.com on the greenroofsTV channel on YouTube. Greenroofs.com Project of the Week video photo credits: All courtesy of Greensulate except for the Regis High School outside facade: “Regis HS E84 St sunny jeh” by Jim.henderson – Own work. Licensed under CC BY 3.0 via Commons.

Read the September 2014 Evaluation of Green Roof Water Quantity and Quality Performance in an Urban Climate by many contributors published by the U.S. EPA where Regis High School was one of seven NYC buildings instrumented for the study; July 2012 NASA & Green Roof Research: Utilizing New Technologies to Update an Old Concept by NASA; December 16, 2011 From roof to hearts, greening at Regis High School, New York, USA by Philipp Judge, SJ in ecojesuit; October 20, 2010 Regis High School Starts at the Top in Going ‘Green’ by Juliann DosSantos in Catholic New York and the October 7, 2010 Rep. Maloney Celebrates a New Green Roof at Regis High School Press Release from Congresswoman Carolyn B. Maloney. Greensulate is based in New York City; for more information contact them at info@greensulate.com, call 800.613.3180, or visit http://www.greensulate.com/.

Founded in 1914 by a formerly anonymous benefactor (Julia M. Grant, the widow of Mayor Hugh J. Grant) and supported by the generosity of her family, its alumni and friends, Regis High School is a five story landmark private Jesuit university-preparatory school located on the Upper East Side of Manhattan. Regis High School offers a tuition free education to Roman Catholic young men who devote the advantages of their education to the service of society and the underprivileged.

Regis High School has been dedicated to intelligently addressing the impacts of climate change for over 10 years, when it initially began its efforts to “green” Regis – an effort to not only save money by conserving energy, but also by responding responsibly and ethically to the environmental issues facing today’s world.

A physical classroom on the roof itself houses scientific monitoring equipment, along with the school’s telescope and other classroom materials. The size and design of the roof was groundbreaking, as it was the 2nd largest green roof in the city when it was completed, and is now the 5th largest green roof in Manhattan (as of summer, 2015). The beautiful design reflects a natural New York City estuary system from above.

In 2011, the Regis High School green roof was awarded the Sustainability Award from the Upper East Side Historic District, for significant achievement in the preservation of rich architectural heritage and the cultural legacy of New York City’s Upper East Side. The award, commemorative plaques, as well as the “Roof Rules” include some of the informational signage on the rooptop.

Greensulate’s green roof is a perfect addition to the curriculum and to supporting the goals of the school. Rev. Philip Judge, SJ ’80 and President of Regis at the time, was the driving force behind the innovative, forward thinking project. How does cultivating an enormous rooftop garden help Regis? The school says the following on its website (see below):

“By crowning the building with a thin layer of vegetation, Regis not only adds beautiful green space to Manhattan’s concrete jungle, but also improves its building “envelope”, effectively stabilizing its interior climate, thereby lowering the cost of cooling the building. In addition, green roofs tend to last about two and a half times longer than standard roofs, because the layer of vegetation shields the roof itself from weather damage. The environmental impact, on the other hand, is more obvious. Green roofs clean and cool the air as its plants consume carbon dioxide and emit oxygen in photosynthesis. They provide homes for the city’s insect and bird populations, thus increasing biodiversity. Green roofs also absorb storm water that would otherwise flow into the city’s sewer system, limiting the volume of runoff and preventing street floods and sewage spills.”

The system does not require irrigation, and continues to be healthy and thriving five years after the initial installation (2015). Concrete pavers were installed adjacent to the 20 kW solar panel array to create space for an outdoor classroom for up to 15 students and a teacher. An herb garden is planted to provide chives, mint, oregano, lavender, sage, and more for the school cafeteria, and Trex decking pathways provide easy access throughout the roof. The raised HVAC system benefits from the cooling effect of the green roof, as do the solar panels, which are estimated to be 10-15% more efficient. Greensulate also maintains the green roof on an ongoing basis.

“With funds provided by the American Recovery and Reinvestment Act of 2009, which Congresswoman Maloney supported, the National Science Foundation awarded Columbia University $476,000 to continue its work on comparing and evaluating the effectiveness of different green roof technologies. Columbia researchers hope the results will lead to improved scientific understanding of green roof performance, optimize its functionality, and provide insight into its potential benefits to human health, economic efficiency and pollution reduction. The Earth Institute at Columbia University has installed monitoring equipment on the roof at Regis High School and will be using the data it collects as part of its sustainability research,” (Rep. Maloney Celebrates a New Green Roof at Regis High School, 2010).

***Greensulate will be providing a live tour of the Regis High School green roof on Thursday, October 8, 2015, during the 13th Annual Cities Alive Green Roof & Wall Conference in New York City. Greensulate will be shuttling groups over from the convention space at 2:30 pm, and space is limited. Learn more about the Cities Alive conference.***