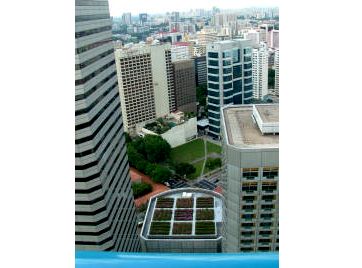 Raffles City is a large, 42-story office tower complex located in the Civic District within the Downtown Core of the city-state of Singapore, managed by CapitaCommercial Trust and CapitaMall Trust. Occupying an entire city block, it’s bounded by Stamford Road, Beach Road, Bras Basah Road and North Bridge Road, and is centrally located as it lies atop of the City Hall MRT station.

“The Raffles City project, which is part of the Government’s development plan for the downtown area, is a landmark of Singapore. So it was fittingly named after its founder, Sir Stamford Raffles. The complex is strategically located at the heart of the city at the site of the former Raffles Institution, a premier boys school with a rich heritage,” (Raffles City website, see below).

“The front facade of the Raffles City complex of three hotels and a shopping centre hides the fact that there is a greenroof above it which provides rooftop agriculture. No green roof development is visible from the street – but look down from the 40th floor and two green roof projects are seen from the Swisshotel The Stamford. The first, in the foreground above the main Raffles City entrance (main photo above), is a flower and garnishing “farm” for the complex. The second is a smaller hotel with a rooftop garden just visible in the background – middle photo above,” (Wilson, 2005).

The salient features of modernist Raffles City, designed to be “the city within a city” are: The 73-story Swiss?tel The Stamford, which is Southeast Asia’s tallest hotel; The 28-story twin-tower Raffles The Plaza; The 42-story Raffles City Tower; A 7-story podium which houses the Raffles City Convention Centre, Raffles City Shopping Centre and the Amrita Spa, a total wellness centre which provides spa treatments and state-of-the-art fitness facilities to the hotel guests and members.