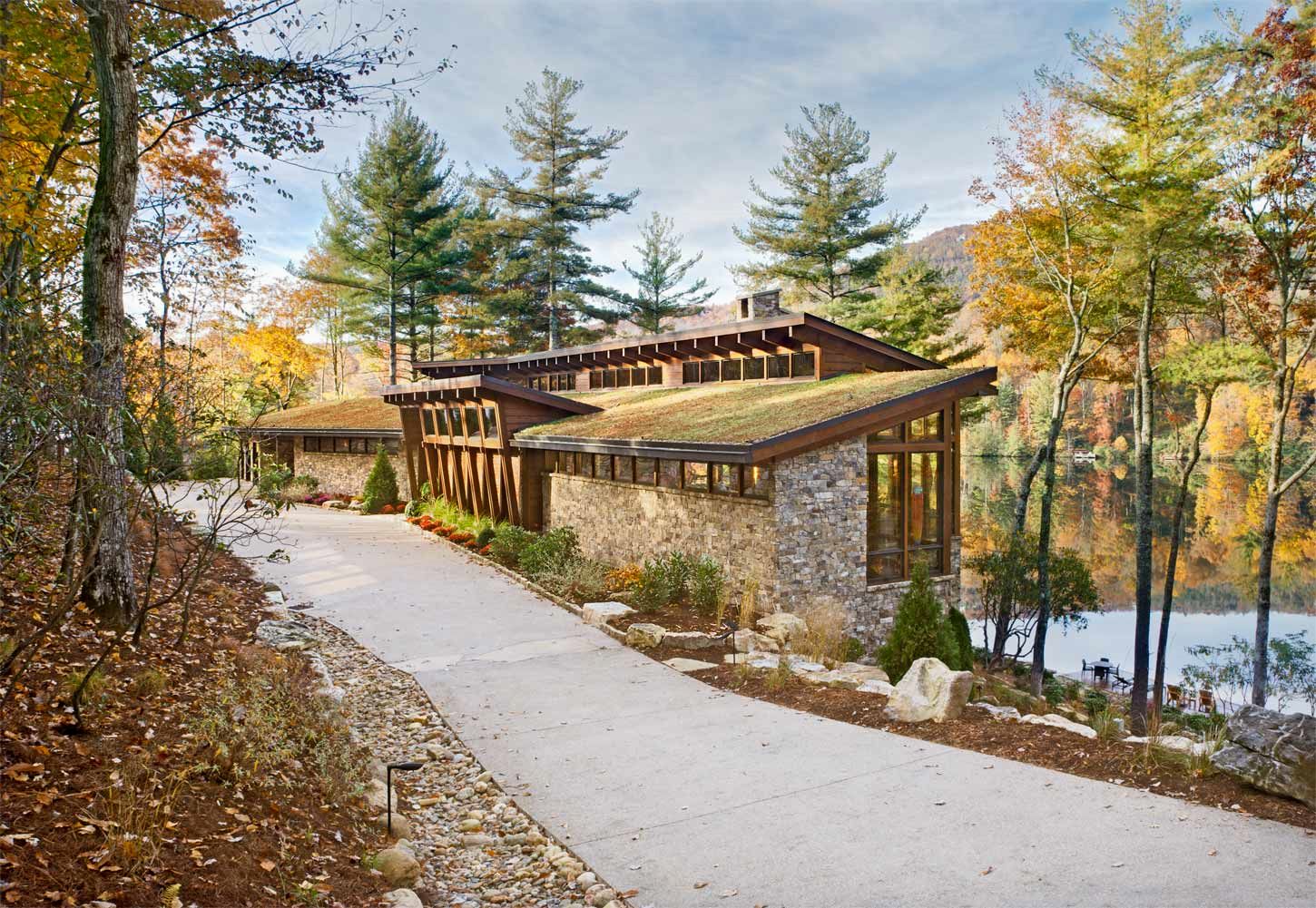 Read much more about the private residence in the September, 2014 Guest Feature Article Green Roof Complements, Completes Seasonal Lakefront Home in the Mountains of Western North Carolina by David Aquilina on Greenroofs.com and watch the 1:48 video Private Lake Toxaway, NC Residence Green Roof – Project of the Week 9/8/14 from Greenroofs.com on the greenroofsTV channel on YouTube. See the Private Lake Toxaway, NC Residence Green Roof project profiles from: Platt Architecture (who refer to it as “House on the Edge”); Living Roofs, Inc.; and Xero Flor America. Watch the 1:28 video Lake Toxaway, NC Green Roof Installation from Living Roofs, Inc. on YouTube.

Situated in the Appalachian Mountains in the western region of the state, Lake Toxaway is the largest private lake in North Carolina. It includes 646 acres of surface area and 14 miles of shoreline. Known for its natural beauty, the picturesque area has a long history as a summertime haven for the well-to-do. Today, Lake Toxaway is an upscale community with hundreds of homes.

A Nashville couple were clear on just what they desired — and equally adamant about what they did not want — for their new seasonal home on the lake. “Other homes on Lake Toxaway look like they belong on a wide expanse of ocean beachfront, not nestled into a serene setting on a mountain lake,” said the homeowner. “In our discussions with our architects, I described our idea for the home as contemporary rustic. Not a lodge, but a home that would be modern yet fit into the natural surroundings.” Platt Architecture helped the homeowners build their dream home. “We set out to design a contemporary home that would be both elegant and casual and blend into the site,” said Parker Platt.

Measuring 40 feet by 150 feet, and totaling 6,700 square feet, the home is long and large yet fits into the site. The lot on which the home was built is narrow and steep, dropping down from the road to the lake. “With local covenants mandating set-backs from both the road and the water, we had to design the house to make its way down the site from the road in order to have the square footage our client wanted,” said Platt.

The floor of the house is 20 feet below the road. That makes the top of the roof level with the road, and the long roofline is visible from the road and driveway. Inspired by the site’s natural beauty, Platt envisioned that a green roof, instead of an unadorned rooftop, would help blend the home into the site.

Platt asked Emilio Ancaya of Living Roofs, Inc. to design and install the roof. “We needed a system that would accommodate the slope,” said Ancaya. “In addition, I wanted a system and plants that would do well in the cool, wet mountain climate up at the 3,000-foot elevation of Lake Toxaway. Plus, we needed an instant green roof that would have extensive vegetative coverage on the day of installation. I just did not think the architect or homeowners would go for a system installed with exposed growing medium and take several seasons to fill in and green up.” From the start of the planning process, Ancaya discussed the requirements with Clayton Rugh, Ph.D., general manager and technical director of Xero Flor America.

Because of the 3:12 slope of the roof, a supplemental stabilization grid was incorporated into the Xero Flor green roof assembly. It was installed atop the system’s water retention fleece layer before the growing medium was added. The grid utilizes TerraCell 140 from Hanes Geo Components. TerraCell is a cellular confinement system made with high-density polyethylene strips bonded together to form a honeycomb configuration. The grid is anchored on the aluminum drain-through edging at the perimeter of the roof. The Living Roof installers filled the grid with two inches of growing medium before rolling out the pre-vegetated green roof mats. The cells of the grid hold the growing medium on the slope. To complete the green roof, the installers added 1-3″ river rock as the perimeter stone.

After conversations with the architect and the homeowner, a six-species plant palette was selected for the project. The six species provide sufficient diversity. The Sedum spurium and Sedum album give the roof its reddish colors in the fall.

The green roof was completed in April 2012. Living Roofs, Inc. made ten maintenance visits during the first year. The roof now gets six visits annually. The roof is irrigated with lake water from early May to early October. As part of routine maintenance, Living Roofs tests the automated irrigation system for correct coverage, pressure and timing, and they make adjustments for seasonal temperatures and rainfall. In October, they shut off the system and winterize it. “Our maintenance plan also includes annual soil testing and fertilization,” said Ancaya.

Given the area’s typical weather patterns, and the retention capacity of the installed Xero Flor assemblies, the 3,959-square-foot green roof annually prevents about 99,850 gallons of stormwater from running off into Lake Toxaway. “Rainwater not retained and evaporated up on the roof is neutralized and less acidic before it reaches the adjacent shoreline and the lake,” said Rugh.