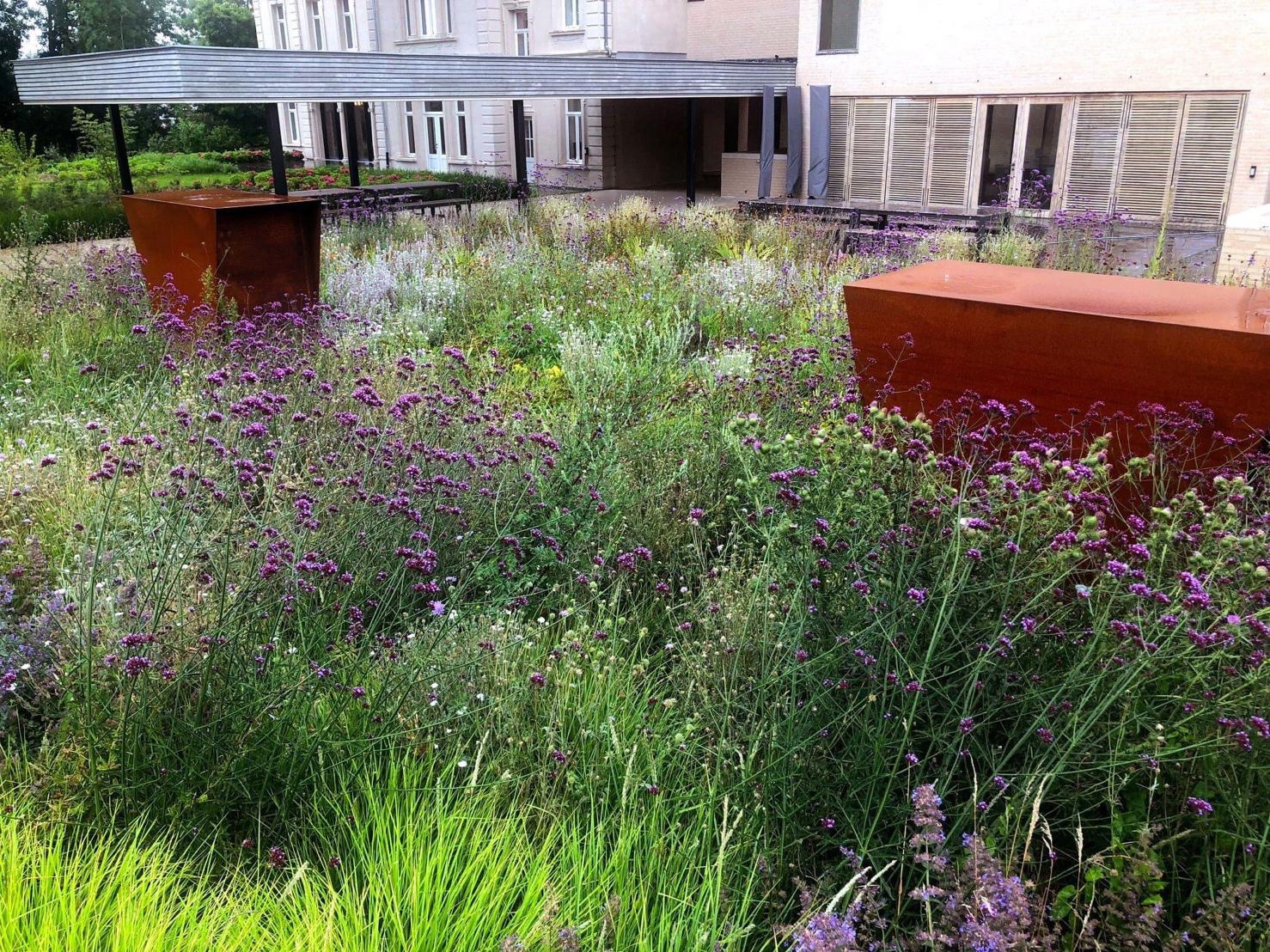 Roof gardens are becoming an increasingly important issue in urban developments worldwide. This is due to the densification of cities and the complexity of intertwined infrastructure and different functions. They are also a response to the increasing hardening and petrifaction of cities. It is well known that greenery has a cooling effect and that roof gardens also buffer water. Roof gardens also contribute to increasing biodiversity. They also form stepping stones in cities for natural hotspots.

It is a well known fact that biodiversity is the result of sometimes a very long process whereby living creatures become dependent on each other for food or shelter in one specific place. That is why in the low countries (Belgium and the Netherlands), governments very often insist on the use of native plants, as these usually have the highest biodiversity linkage.

Located in the area of Brussels, a naturalistic roof garden was constructed on top of a private parking garage in Halle 2016. This is a biodiverse colourful garden within a part of a 19th century park, next to a castle that has been turned on into office space.

Conditions on roof gardens are actually similar to steppes as they are very hot and dry in summer and very cold in winter. So the temperature fluctuation is very extreme and plants that can cope with such conditions have to be very hardy to survive.

That is why we make roof gardens that contain both native and non-native plants. This means that the palette of usable plants is very large, and we do select them on the basis of the following criteria: drought resistance; substrate depth; and type of planting system.

It goes without saying that drought resistance is an important criterion. The roof garden published here is only irrigated sporadically in the event of extreme drought. As the weather is becoming extreme, we consider it advisable to provide emergency irrigation for all roof gardens.

The substrate depths on this semi-intensive sloping greenroof vary from an average of 15 cm to 80 cm at the edges. The growing media is a high-quality mixture of sand, compost, bentonite and volcanic materials.

Regarding planting and the Private Halle Belgium “Rooftop as Part of a City Park” planting system, we are opting more and more for a naturalistic dynamic, the same principle we apply as well on rain gardens and bioswales. We mix plants on the basis of a specific recipe, on the basis of aesthetic criteria of leaf contrasts, a certain degree of colour compatibility, an amount of evergreen species (in favour of the winter aspect) and height structure. These are criteria that are also used for perennial borders, for example. The big difference, however, is that we set a process in motion here. This is totally different with regard to a system where you want to see the planting unchanged over the years.

This is not the case here; we design so that even wild plants can spread spontaneously on the roof. This helps the naturalistic picture and also helps biodiversity. The management of ‘intelligent and selective weeding’ then helps in the selection process to remove what takes over or that which compromises diversity. This requires gardeners who have a good knowledge of plants. We therefore call for gardening education to make a strong commitment to this knowledge, because we are convinced that the cities of the future will have more and more naturalistic plantations.

The main aim is to achieve a diversified picture with a high ground cover aspect, a Darwinian process of ‘Survival of the Fittest.’ By using many species, there is a very good chance that the soil will be covered. The chosen plants re-sow themselves or reproduce by stolons. Every year the design of the green roof changes, which makes the process exciting and represents a negotiation with nature. This is philosophically also an important attitude. You don’t force nature, but let nature guide its process partly by itself. So you only set something in motion, which is a major turnaround in the approach to classical parks as we knew them in the 20th century.

Over the last three decades, we have been applying these “patchwork systems,” as we call them, more and more in various plantations. This is also the case in the forest area under mature trees in the park where we designed this roof garden.

In addition to their drought resistance, plant selection is made as wide as possible in order to maximise the ground covering aspect. Of course, this is also reflected in the great diversity in terms of both shape and colour. Two types of plants used in this system, groundcovers and self-sowing species. The first take care of the lateral covering structure, the others shape the vertical aspect. The structural verticality present in the winter creates interesting shapes at this time of the year in a very specific way.

The self-sowing species are also the ones that cause the unpredictable and dynamic aspect. Species such as Euphorbia oblongata, Oenothera versicolor, and Verbena bonariensis seek their own way and opportunity and make the landscape change every year. Others, such as Stachys byzantina, Sedum takesimense, and Silene maritima are groundcovers, creating a horizontal layer that complements all those vertical plants in their structure.

Although individual numbers have fluctuated, all of the species we have planted have survived so far. During this time, Linaria vulgaris has spread between them, which is actually the first native plant to take its place among the vegetation. This gives us an extra flowering beautiful endemic plant. The most important flowering period is between May and July, but we have also ensured that there is a long bloom time.

The Sysirinchium, the Stachys, the Sesleri, and the Sedum takesimense are particularly visible in terms of their structure in winter and thus form the backbone of the setting. Sedum takesimense is a very important plant for our rooftop concepts, and Hans Simon blessed us with this plant, a man with fantastic plant knowledge of whom we still have very good memories.

What makes the overall picture come alive at the Private Halle, Belgium “Rooftop as Part of a City Park” is that a sea of flowers extends behind the castle. Offices are located within and people have beautiful views from their windows. And from spring onwards, there are many insects and butterflies visiting this sea of flowers. Birds also come to this piece of naturalistic vegetation.

Meanwhile we are experimenting with many more species on various new roofs to test what grows well and what does not, always with the aim of getting as much aesthetic quality and biodiversity as possible in one concept. It goes without saying that a good knowledge of plants is indispensable for creating a roof garden with a dynamic planting concept.