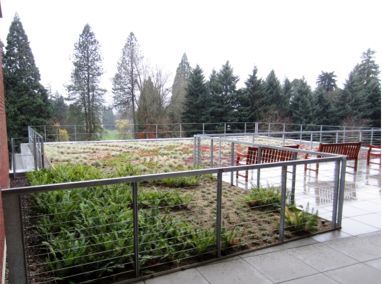 The new 78,000 sf Performing Arts Building at Reed College is a three story building serving as the front door to campus and encloses the Commons Quad, connecting the performing arts to the academic core of campus. The facility is organized around a central atrium lobby and informal learning space that provides an address for each program and three performance venues. The west end of the third floor of the atrium opens out to an ecoroof with a paved exterior terrace area adjacent to a vegetated green roof.

Reed College’s new Performing Arts Building, which opened September 2013, represents a major step forward in the college’s commitment to the important role the arts have played throughout Reed’s first 100 years. For the first time in Reed’s history, the departments of music, dance, and theatre are housed in one building that includes rehearsal and performance space, offices, scene and costume studios, collaborative spaces, and a multimedia lab.

The Performing Arts Building at Reed College recently completed its first ecoroof on the new Earth Advantage gold-certified Performing Arts Building. The ecoroof boasts plant species native to the state and rare to ecoroofs, including succulent cacti, lewisias and sedums, as well as ferns, and will be monitored by the College’s Biology Department. The ecoroof masks views of the parking lot from the adjacent outdoor seating terrace, visually connecting with the Crystal Springs Rhododendron Garden across the street and the West Hills beyond.