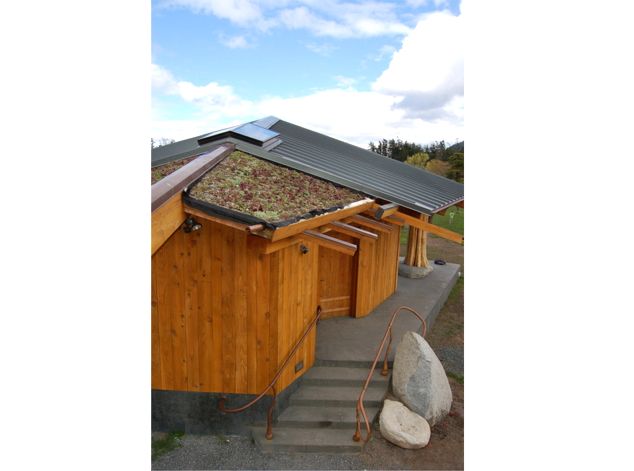 The Orcas Open Arts/Stage on the Green is located at 7 Windfall Lane, Eastsound, Wa 98245; visit Stage on the Green at: www.stageonthegreen.org, where you can view lots of other photos and learn about the project there. Contact architect David Kau at phone: 360.376.7521 or email: david@stoltzkau.com, and Sandra Green at phone: 360.376.6159 or email: sandra@orcasonline.com. Visit the hadj Design website here, and contact greenroof designer Patrick Carey at phone: 425.482.9763 or email: pkc@hadj.net. Read “History made at Eastsound Village Green” by Sharon Kivisto in the San Juan Islander of July 11, 2006 here.

The Orcas Island “Stage on the Green” greenroof is a volunteer project located in the village of Eastsound on one of the San Juan Islands within Puget Sound. “Stage on the Green” is a performance stage being constructed on Orcas Island, in the heart of Eastsound on the village green. It will compliment and enhance all the Orcas Island community events currently held on the Village Green. Orcas Island events include the Orcas Island Library Fair, The Bite of Orcas, Historical Days, The Orcas Island Farmers Market, held on Saturdays, and the Orcas Island Concerts in the Park summer program. This new “Stage on the Green” will serve as a focal point for many community gatherings which will celebrate the special nature of Orcas Island.Collaboratively designed by a local community of architects, engineers, artists, and craftsmen, this performance stage was predominantly built with donated materials and labor. It is equipped with a roof that incorporates both a PV solar array and a greenroof or roughly 150 sf. The 4:12 overall roof slope created an interesting challenge for the greenroof, which was resolved by greenroof design consultant, Patrick Carey, using a free-standing skeleton to stabilize soils and provide an armature for the geotextiles. The use of the skeleton eliminated all penetrations of the TPO roofing substrates. Custom copper scuppers and “tailpipes” exit the greenroof and provide roof drainage.

The project was planted with local mature Sedum plant stock provided by Sandra Green. hadj Design installed the membrane and geotextiles and provided the media. Gravel and beach rock was placed to provide ballast for the growing medium by the architect and builders.