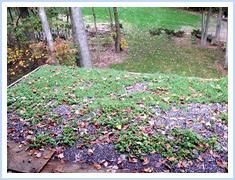 Many thanks to J?rg Breuning from Green Roof Service LLC for his invaluable help and support! Also many thanks to Chuck Cave for his tireless efforts, and to Penn State and Emory Knoll Farms for the material donations. And millions of thanks to the volunteers who helped with the installation of this green roof!Contact Barbara Anderson for tours or other inquiries: banderson@nittanydharma.org. Christine E. Th?ring can be contacted at christine.thuring@gmail.com.Relevant websites:http://hortweb.cas.psu.edu/research/greenroofcenter/about_ctr.htmlhttp://www.skylandusa.us/http://greenroofplants.comhttp://www.greenroofservice.com/

Owner Barbara Anderson had always wanted a green roof and, just when she’d given up hope, Christine Th?ring showed up, eager to get dirt under her fingernails after graduating with her Master’s from Penn State’s “Centre for Green Roof Research” in May 2005. The greenroof is intended to be an educational feature at the Julian Woods intentional community, and its installation served as the first opportunity. Both owner and designer were interested in making the green roof as sustainable as possible, but accommodated to the realities of performance (fabricated drainage material), structural capacity (growing medium instead of natural soil) and local conditions (plant selection). The building itself is very natural, and does not contain any pressure-treated wood but rather only that which has been locally harvested wood. Funding came from a Penn State University Centre for Sustainability project account.

The waterproof membrane was installed in June, 2005. On July 11, 15 volunteers, ranging from 19 to 65 years in age, came to Julian Woods to install the drainage layer and growing medium. The volunteers received an educational presentation before enjoying a pot luck lunch. It took about an hour to get the drainage material ready, and then 1.5 hours to get the medium up by bucket brigade. Planting occurred in ensuing days. In total, it took about 4 hours to complete the roof, from drainage layer to fully planted. The green roof was installed on the entrance roof to the O-an Zendo, about 8 feet from the ground surface. Being surrounded by forest, the roof only receives about 3 hours of direct sunlight per day, which influenced plant selection considerably. The building is made of wood, and the roof had a (conservative) load capacity of 25 lb/ sq. ft.The drainage layer was Enkadrain, donated by PSU?s Centre for Green Roof Research. We cleaned and reused the old vegetation mats from spring 2005?s first EcoRoof Technology Course (HORT 497a), and new material otherwise. For growing media, we used Skyland USA, LLC?s ?roofliteTM intensive? medium. This was chosen over the extensive variety in order to suit the plants that were selected for the shaded conditions. It comprises expanded aggregate and organic matter in a ratio of between 60-70% mineral, and was 8cm in depth.Originally, we planned for shallow-rooting, shade-tolerant perennials. When our plant supplier went out of business at the last minute, we considered taking transplants from Barbara?s property (forest ground cover), but the timing was bad. That list would have included native species like Pennsylvania sedge (Carex pennsylvanica), Alliums, Ferns, Violets, Strawberry, Aquilegia, Tiarella, Wild Ginger, as well as Ajuga. As such, we ended up planting the Sedum cuttings from the cleaned vegetation mats, plugs of S. stoloniferum and S. ternatum, and also local cuttings of S. spurium. Herbs were planted later, in a reach-circle from the window access point.