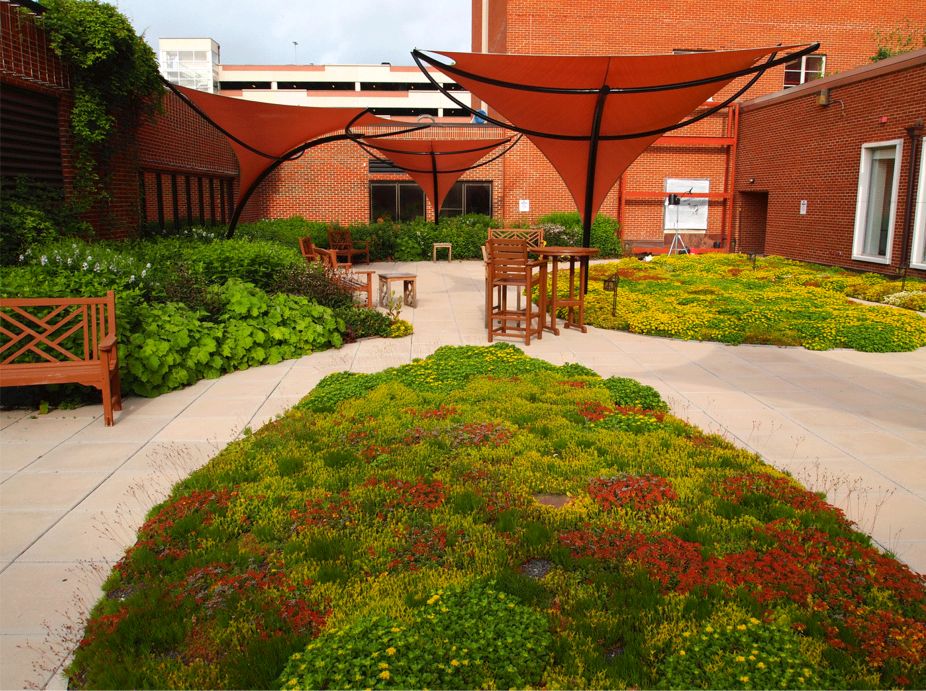 Learn about the following companies in The Greenroof & Greenwall Directory: Tremco and Green Roof Plants.

The NIH Library is an open stacks biomedical research library whose collection and services are developed to support the programs of the National Institutes of Health and selected U.S. Department of Health and Human Services (HHS) agencies. “This endeavor was the first retrofit of an existing NIH roof with green roof technology. It was a cooperative effort between the NIH Library and the Office of Research Facilities Division of Environmental Protection.

“The 4400-square-foot cement patio area adjacent to the NIH Library in Building 10 has been transformed into a verdant, eco-friendly garden terrace. The project won the HHS Green Champion Award (FY 2009) for Sustainable Building Design. The terrace project and the other green initiatives won the Medical Library Association Green Project of the Year Award (2011). The NIH Library Green Terrace is an extension of the newly redesigned NIH Library facility and serves as an outdoor green garden oasis for NIH staff and visitors. The Green Terrace environment provides a natural, relaxing setting for individuals and groups to retreat, read, reflect, and rejuvenate. A new entrance from the physical library to the Green Terrace has been installed to allow library patrons easy access to both environments.

“The NIH Library Green Terrace showcases several garden areas which are rooted in engineered soil. Some of the garden areas are drought tolerant, while others are designed for more traditional perennial gardens including an annual zone that features several types of tropical plants currently being researched at NIH for their medicinal values. The walls surrounding the Green Terrace will be softened with several species of vines cascading from roof areas above or twined up on mounted trellises. The combination of garden surfaces and covered walls will help reduce the extreme temperatures in the summer. Green Terrace visitors may enjoy the eating nooks and bench seating under the shade canopies and along the garden walls,” (NIH website). Covering the lower level of the library, the Green Terrace is accessible from the Reading Room on the upper level.

Originally conceived in 2006 by Mary Hash, the library’s administrative officer, and other owner’s representatives Ben Hope and Brad Otterson, the key objectives included the following: 1) Stormwater capture – The library staff wanted to make sure the roof could capture all the storm water from the terrace roof as a minimum; 2) Improving the comfort factor for those who want to use the terrace; 3) Improving the connectivity of the terrace to the library’s interior; 4) Somehow creating a connecting message between NIH’s mission and the roof; 5) Looking to further improve energy efficiency, if practical (Velasquez, 2011).

De-construction of the existing hardscaped patio began in 2008, and the greenroof was completed in 2009. NIH decided to phase in the greenwalls; the first two wire trellis walls were installed during the initial project and the remaining two walls were installed in a follow-up project during the second year. Tree seedlings were handed out during the ceremony to promote Earth Day 2009. Several sustainable features beyond the vegetated roof surfaces are also incorporated into the Green Terrace design including a white-reflective Rock-It™ roofing system and 4kW, 22 solar panels which supplement the project’s energy use powering the terrace lighting and irrigation pumps. The solar panels are mounted on the roof just south of the terrace. Rain is stored on site in a 1,200 gallon cistern and recycled to irrigate the gardens and reduce the flow to and from the municipal water supply and storm systems. This feature, in combination with the vegetated roof areas, offers important reductions in storm water runoff from the NIH campus, ultimately supporting water quality improvement and conservation goals for the broader Chesapeake Bay watershed. A weather station monitors the current weather on the terrace. It updates the data every 10 minutes. The NIH Library is in the process of becoming LEED Certified as a Commercial Interior.

About 30% of the vegetated roof contains plants the NIH is studying for medicinal purposes; growing media ranges from 3-10”. The following is the List of Plants on the Green Terrace NIH Library as of November 9, 2009: