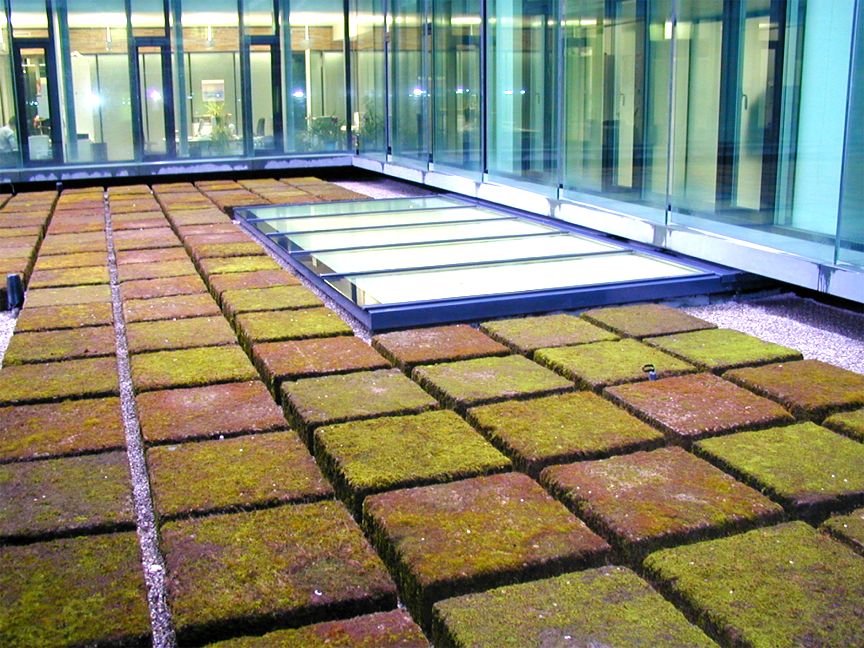 Read the entire February 2004 Greenroofs.com Guest Feature by Michel R. Chiaffredo entitled “When Mosses Recreate the Landscape on the Roof” here; this profile was created from this article.

This office complex at 10 Gedonstrassein in Munich was completed in the spring of 2002 with pre-grown Ceratodon purpureum roof and wall panels using a technique developed and patented under phyto-ecological engineering called BRYOTEC Technology. BRYOTEC Technology is an industrial production of a biological inoculant containing micro-organisms and bryophytes with a very high productivity level. It produces biological crusts of mosses which will play a very important role in ground stabilisation (or engineered soil media stabilisation, if on the roof), carbon fixation, and nitrogen fixation. Vascular plant cover is enhanced by the presence of these biological crusts. MCK ENVIRONNEMENT owns an exclusive license of the patent for the purpose of pursuing the development of this technology.

The goal of BRYOTEC Technology is to install a bryophytic cover on roofs and walls with types of vegetation adapted to difficult life conditions with minimum or no maintenance at all. Vegetation with such characteristics are the primary dynamics found in nature, e.g. Therophytes (annual plants) and pre-sods. BRYOTEC technology makes possible the production of pioneer groups essential to the settlement of these roof vegetation types. This procedure allows the repopulation of plant species in accordance with natural processes – those which are perennial and which maintain biodiversity. The ecological chain reconstructed from local species is environmentally coherent. Mats on which mosses are cultivated and mixed with seeds of xerophylous plants (those that are adapted for growing or living in dry surroundings) can be started and subsequently installed on roofs after proper development.