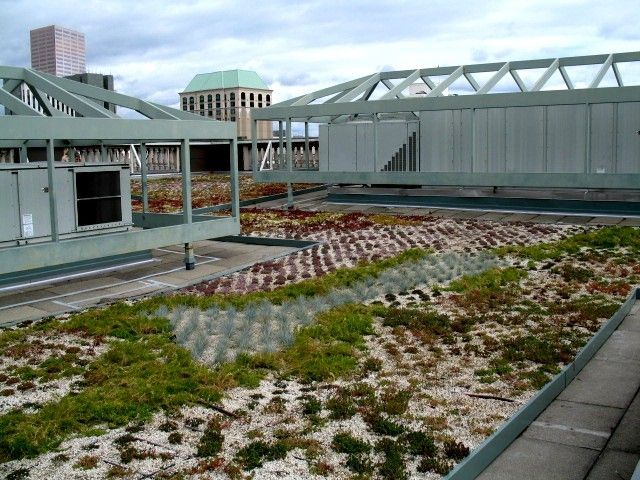 Public tours of the Multnomah County Central Library greenroof are offered, but although the roof is accessible for maintenance, participants are not allowed onto the actual roof. So while the roof is visible from several staff areas during the tour, it is not actually accessible to the public. Learn more at www.multcolib.org and specifically at the eco-roof page. Read: the January 15, 2009 Gresham Outlook article “Historic treasure gets 21st-century ecoroof” by Jennifer Clampet; the December 17, 2008 Project Press Release from Columbia Green Technologies; and see the October 9, 2008 OregonLive.com article “Downtown: Main library adds roof full of plants” by Clint Bowie here. Learn about the landscape architect, Macdonald Environmental Planning, here. For more information contact: Alan Proffitt, Multnomah County Facilities Property Manager, 503.988.4218 and Kat West, Multnomah County Sustainability Manager, 503.988.4092.

The Multnomah County Central Library building serves as the primary library for the residents of Portland and is registered as an Historic Landmark with the City of Portland. The Central Library recently won an award for being one of the Top Ten Libraries which are historic landmarks in the U.S. The Multnomah County’s Central Library new greenroof was unveiled in September, 2008 by County Commissioner Maria Rojo de Steffey. “The $180,000 roof replaces the former leaking structure with one that is expected to eventually defray its cost with the structure?s overall energy savings. The county?s main library branch is the first in Oregon to house an ?eco-roof? ? a structure that uses plants to help clean the air and control storm water. Kat West, sustainability manager with the Multnomah County Sustainability Program, noted that alternative roofs are important because they mimic the function of a natural meadow.?Their many benefits include minimizing the runoff of rainwater and pollution into our rivers, saving money on energy costs and thereby climate change impacts, they mitigate the heat island effect, and they save money by extending the lifespan of a roof,? West noted. ?Multnomah County has more than 25 adopted sustainability policies and eco-roofs are tangible examples of our commitment to a sustainable future,” (Columbia Green Technologies Press Release, see below). The eco roof has 17,000 plants, including sedums and drought-tolerant grasses. See a Map of Plants (PDF).

“Project details – Completed: September 15, 2008Location: Downtown Portland. Stormwater discharges into the Willamette River.Square Footage: 7,188 square feet. (Total roof area: 18,145 square feet.) Cost per Square Foot: $25Structure: The Central Library eco-roof was constructed using 24? x 24? palletized soil. The use of pallets allowed for easy installation. Soil Characteristics: The soil is 4? deep and consists of an engineered, light-weight blend of inorganic and organic components. Zebra, a water retentive additive made from natural cornstarch, is included in the soil mix. Weight of Green Roof: Total green roof assembly = 15?20 pounds per square foot (saturated). Irrigation System: The irrigation system is used only for hot, dry summer months when the plants need additional water to maintain health. Calculations will be made carefully to ensure that the minimum amount of water is used exactly where and when it is needed.Monitoring – Portland State University professor Graig A. Spolek and the City of Portland are partnering with Multnomah County to provide storm water monitoring of the Central Library eco-roof. The objective is to measure how much rain is being held back from the sewer by the eco-roof, and to identify energy savings realized from a reduced need to heat and cool the building. Measuring the performance of a green roof is important to assessing what benefits can be realized from installing green roofs on other buildings in the area,” (Multnomah County Central Library website, see below).