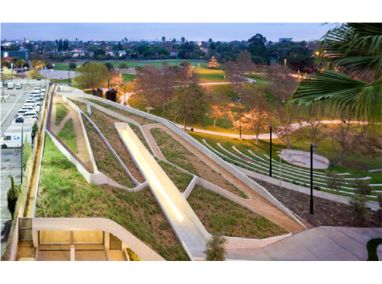 Learn about the following companies in The Greenroof & Greenwall Directory: Roofmeadow and K. Dakin Design.

Integrated into the landscape of Pan Pacific Park, the Los Angeles Museum of the Holocaust (LAMOTH) is the oldest Holocaust museum in the United States and has a two-fold mission that has remained constant since its inception in 1961: commemoration and education. It is always free because the founding Survivors insisted that no visitors ever be turned away from learning about the Holocaust for lack of an entry fee. Opened in October, 2010, the new LEED Gold certified Los Angeles Museum of the Holocaust is its 4th location and now permanent home, on a lot adjacent to the Holocaust Memorial constructed in 1992.

The client wanted an above ground iconic museum building and the architect wanted to maintain open space by submersion. The large rooftop garden showcases ornamental native and climate appropriate grasses and the public is encouraged to explore the greenroof. The plant palette includes a low-water mix of Blue Grama and Esparto Grass, Pine Muhly, Red Carpet Stonecrop, and Star of Bethlehem, a type of Hyacinth. Interactive media and interface design features include iPod Touch handheld devices and a large-format touch-screen table.

“Key Project Goals: The primary design strategy embeds the museum into the surrounding park landscape. This achieves a greater contextual integration while maintaining the openness of the site by continuing the usable green-space over the museum roof. An iconic structure, in this scenario, seamlessly inhabits rather than competes with the site, bridging the community formally and functionally with the building’s intent. Creating a sustainable, LEED certified structure, employing innovative technology solutions in both the construction and day-to-day function of the museum, and establishing a processional narrative of experience were all achieved within the modest budget of $450/sq ft.,” (LAMOTH, 2011).

“Completed in July 2010 (Los Angles, CA). The rooftop garden designed collaboratively by Lisa Lee Benjamin of Evo Catalyst and Karla Dakin of K. Dakin Design that tops the new Los Angeles Holocaust Museum is a visionary response to the complex contemporary architecture of Belzberg Architects. The undulating landscape is a metaphorical representation of hope, love and beauty in the form of climate appropriate plants that offers a respite from the ever present weight of the Holocaust whose memories are on display inside the building in remembrance of the survivors.

“Arguably one the steepest—it literally touches the ground in several locations, and most technically challenging green roof to install to date without a sedum mat base, the garden showcases ornamental native grasses like blue grama (Bouteloua gracilis), and climate appropriate grasses like esparto grass (lygeum spartium), native to Israel and Egypt, and pine muhly grass (Muhlenbergia dubia). “The choice of three grasses rather than one is intended to establish and encourage biodiversity. If one plant dies another will be there to fill in,” says Karla Dakin. “The garden is also unusual in that it is totally organic and will be maintained as such. No chemical compound fertilizers will be used here,” adds Lisa Lee Benjamin.

“In further response to the dramatic and spectacular slopes of the roof, red stone crop (Crassula radicans), a succulent, was planted among the grasses to reduce erosion and ensure slope stability during the early life of the landscape. Renowned horticulturalist and grass specialist John Greenlee was consulted during the plant selection process.

“The roof landscape offers two distinct viewing experiences. From afar it’s possible to see the plant vocabulary quietly shift from the manicured grass in its Pan Pacific Park location to the looser, longer grass ecology atop the roof. The textures of turf and ornamental grass lead the eye from ground to sky. Meanwhile the architecture creates a clear, elegant form and the undulating grasses represent a field of transformation.

“Up close in the garden visitors view minute details of seed heads and the loose flowing structure of grasses peaking out above the parapets. Spare accents of white and pale salmon bulbs generate hints of color and quiet beauty in the central roof. The symbols of hope, love, and beauty are represented in the garden by fine blades of grass and feathery seed heads enhanced by wind and light. The landscape appears to float and sway above the museum tethered by the distinctive architectural lines of the building. The blue gray and sea green plants complement the white Colton concrete and the translucent verdant glass that define the structure,” (Lisa Lee Benjamin, Evo Catalyst & Karla Dakin, K. Dakin Design).