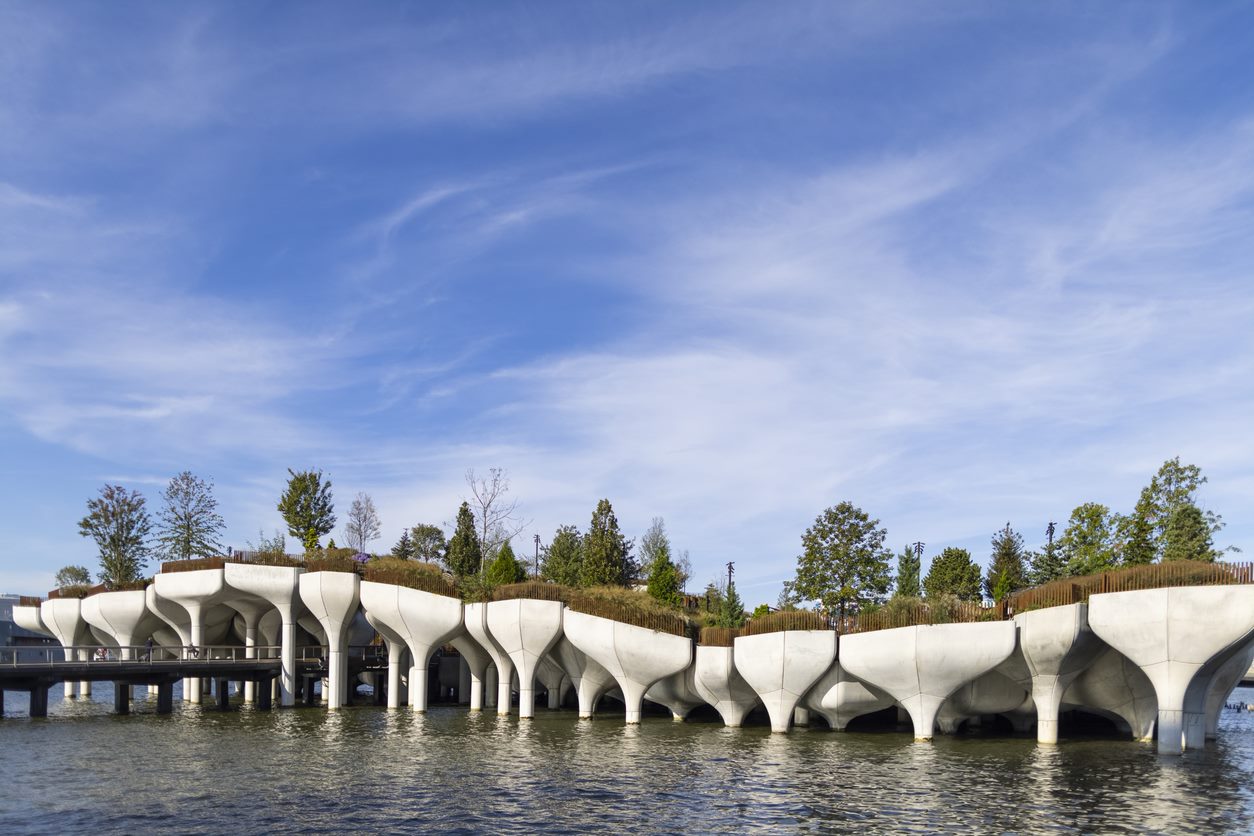 Visit LittleIsland.org for history, park hours, and much information; see the complete list of contractors. For more information regarding Little Island, contact Signe Nielsen of MNLA at: info@mnlandscape.com

Designed by Heatherwick Studio, MNLA, Arup, and many others, Little Island is a new public park located in Hudson River Park, where New Yorkers and visitors can experience nature and art in a unique urban oasis on the Hudson River. Primarily funded by The Diller – von Furstenberg Family Foundation, the park features a lush, seasonal, landscape with rolling hills, winding pathways and dazzling views coupled with free programming that includes music, dance, theater, poetry, comedy, and arts workshops for all ages.

Located near the intersection of West Street and 13th Street in the Meatpacking District and Chelsea neighborhoods of Manhattan, Little Island is accessed via two long gangways.

Components of the park, nestled among more than 350 species of flowers, trees and shrubs, include a 687-seat amphitheater, “The Amph,” a central plaza with seating and serving food and beverages, “The Play Ground,” an intimate stage and lawn space, “The Glade,” and dazzling views of the park, New York City, and the Hudson River.

“Plans arose in November 2014 for a new park, known as Pier 55, designed by Heatherwick Studio and largely funded by Barry Diller and Diane von Fürstenberg, with some funding from the New York City and state governments. Originally, construction was to begin in 2015 and the park would have been completed in 2018 or 2019. However, the park’s construction was delayed by lawsuits from the City Club of New York. Plans for the pier were scrapped in September 2017 due to lawsuits and cost overruns. The next month, the proposal was revived when New York Governor Andrew Cuomo agreed to provide funding for the park. Construction of the structure began in April 2018 and a symbolic cornerstone was laid in December 2018. The project was renamed Little Island in 2019 and opened on May 21, 2021.

The Diller family foundation pledged to fund the upkeep of the park, including programming, for twenty years. According to Barry Diller, the foundation’s total contribution to the park reaches an estimated figure of $380 million, of which the upkeep costs comprise $120 million.” ~ Wikipedia

Heatherwick Studio explored the idea of designing a new pier that could draw from the remaining wooden piles from Pier 54. Principal of MNLA (Mathews Nielsen Landscape Architects), Signe Nielsen describes her concept for the fanciful 2.4-acre Little Island park appearing to float like a magical green carpet above the eastern edge of the Hudson River by New York City’s Pier 54 and 56, “as a leaf with upturned edges.”

According to MNLA, “The lifted corners of the pier create distinct microclimates that reveal themselves through color, texture, light, and shadow. Whether meandering along paths, stairs, or boulders scrambles, the eye is at times directed downward to the rich palette of plants or outwards to spectacular views of the city and harbor. Little Island is a maritime botanic garden with 35 species of trees, 65 species of shrubs, and 290 varieties of grasses, perennials, vines, and bulbs, many of which have been selected for their fragrance and attractiveness to birds and pollinators.”

The island as a green roof: The highly complex construction is an intensive green roof, using various techniques to climb to a height of 62 feet over the Hudson River. The paved areas range from 1.5 to 8 %, and landscape slopes are up to 60%.

“Arup’s civil engineers worked closely with MNLA and Arup’s structural team to develop an integrated stormwater management scheme that transforms Little Island into what lead civil engineer Vincent Lee describes as “one giant green roof.” Thanks to a network of green infrastructure elements artfully integrated into the park’s landscaping and plazas, virtually the entire park is a sponge for stormwater. As soon as stormwater runoff is captured by one of these surface features, it begins to filter down through the pier structure’s substrata, which is designed to treat the water before gradually releasing it back into the Hudson River.” ~ Arup

Structural System: There are four components to the structural system: in order from the bottom: pile, capital, tulip pot and slab.

“The piles are driven down into bedrock below the river, then a capital is set on top of each pile and receives the tulip pot, and all of the tulip pots and conventional deck are tied together with a reinforced concrete slab so that the entire structure acts as a unified structural element for seismic and stability reasons. There are over 400 piles, but only about 132 have tulip pots on top of them, so in order for the tall slender piles with these very heavy tulip pots on top of them not to move around under all of the weight, the whole thing is tied together with a structural slab.” ~ Signe Nielsen, 2022 on Greenroofs.com

Each pot is roughly 20 feet in diameter and weighs up to 75 tons; no two pots are exactly the same. The installation of the pots was overseen by engineer Arup Group and manufactured in Upstate New York by the Fort Miller Company.

Arup adopted what they called the Cairo pentagram (after the Egyptian capital), an interlocking 5-sided shape but irregular pentagram, which fit together like a puzzle. In the end, 132 individual tulip pots were constructed from only 39 different forms, as Arup innovated a way of reusing form work and greatly reducing the amount of labor. Arup collaborated as well on mechanical, electrical and civil engineering and plumbing.

“Where we needed additional buildup for topography and we were trying to save weight load on the piles, we used geofoam EPS19, a very dense foam. It varies in thickness from maybe 2 feet to 12 feet.” ~ Signe Nielsen, 2022 on Greenroofs.com

There are minimal impacts on adjacent buildings or properties.

“Soil depths range from 24 inches to 6 feet (at hero tree* locations) because the soil profile and the concrete slab are not parallel; the depth of soil is a direct function of the loads that can be sustained on the piles, so where we needed to build up the finished grade, we used drainage mat, drainage gravel, and geofoam below the soil. Not all the areas have geofoam under them so in the shallower depths, for the most part, there is only drainage mat (gravel, filter fabric) and soil.” ~ Signe Nielsen, 2022 on Greenroofs.com

Different planting typologies define three distinct overlooks on Little Island—the Northeast, the Southwest, and the Northwest. For the entire park, there were 114 trees, including 39 species of trees, 74 species of shrubs, 284 species of grasses, vines and perennials. 66,000 bulbs were planted.

See the MNLA Tree Plant List in the Gallery. The raw cost of each tree was up to several thousand dollars. Only one hero tree could fit on a truck. Regardless of size, every tree was craned into place. The cost of each hero tree, including a two-year warranty was about $25,000. It is thought that the Dawn Redwoods could reach as much as 70 feet to 80 feet in height, although the amount and rate of growth since the plantings from March to October, 2020 has been variable. The Metasequoias (Dawn Redwood) have the greatest soil volume underneath them.

Planting began in March 2020 and culminated in December 2020.

Five Different Soil Types: There are four types of soil mix: but essentially they consist of three types of soil, two which have a variation on a theme. Type A and B are both sand-based loam; one has a higher proportion of organic matter than the other, which is the only difference between the two.

“The variations, which we could call C and D on those two types, are due to geofibers. We called for geofibers on slopes greater than 40% and all the way to 100% or 1:1. The fifth type of soil is structural soil. “The structural soil is only used where we need a root path for a large tree which is hemmed in on three sides, such as the Kentucky Coffee Tree at an S curve, with a path on three sides, so that roots have access to larger soil volumes all around. That’s the ONLY reason structural soil is used.” ~ Signe Nielsen, 2022 on Greenroofs.com

Steven L. Cantor writes, “Although essentially finished, Little Island remains a work in progress. A creation of many micro-climatic ecologies, some of which are evolving as the plantings become established, Signe Nielsen acknowledges that some plantings will need to be enhanced or occasionally replaced as conditions change.

“As hero trees create shade, some perennials that were in full sun will need to be replaced. As some areas that are wet may dry out, or vice versa, some adjustments may need to be made; yet for the most part, a remarkably complex landscape is evolving as intended, and has already withstood severe weather while attracting diverse groups of visitors who are glad to participate in all the activities offered. Will every hero tree become truly heroic? Let us hope so.”

Little Island provides serene spaces to explore, new venues for live performances and cultural events, and unique vantage points to appreciate the surrounding area, with dramatic views of the water at sunset. As an urban oasis, the park’s imaginative design offers all New Yorkers and visitors a new public space that is whimsical, captivating, and restorative, while providing the city with much need green infrastructure benefits.