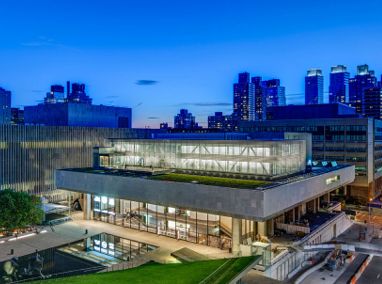 Learn about Green Roof Blocks in The Greenroof & Greenwall Directory.

Designed by H3 Architects, the Claire Tow Theater is the addition to the rooftop of the Eero Saarinen-designed Lincoln Center Theater (LCT) building – and the first new performance hall to the Lincoln Center campus since its conception in the 1920’s. The permanent home of LCT3 is a programming initiative devoted to producing the work of emerging playwrights, directors, and designers. Through fully staged productions and affordable tickets, LCT3 is bringing a new generation of artists and audiences to LCT. In addition, through tours, telecasts, films, publications, recordings and this website, the organization reaches audiences across the nation and around the world.

The Claire Tow Theater, named after the wife of long-time LCT Board of Directors member Leonard Tow, became LCT’s third stage at Lincoln Center, joining the Vivian Beaumont and Mitzi E. Newhouse Theaters. With 23,000 square feet of space and a 112-seat theater, the new performance venue complements the scale of LCT’s existing venues and offers a practical way to present new ideas to smaller audiences.

After studying multiple options for locating a smaller third theater on the Lincoln Center Theater campus, the team concluded that the only suitable location was on the rooftop of the Vivian Beaumont Theater. Upon investigation into the building’s armature and giant 20-foot concrete Vierndeel trusses, H3 decided that the structure must play a major role in the design of the addition and directly inform the composition.

Respecting the rigorousness of Saarinen’s design, LCT3’s program is contained in a simple rectangular volume. The simple volume complements the existing structure, while the exterior walls of steel trusses, glass curtainwall, and aluminum screenwall identify the addition as something new. During the day, the addition subtly appears from just a few vantage points. At night, the new volume glows above the existing roof.

The LCT3 rooftop addition is perched on only six structural points, atop the existing building’s concrete columns, three on each side. Steel trusses, the longest 150 feet long, bridge from point to point to support the two-story volume. The diagonal bracing of the trusses becomes a visible and distinctive element of both the exterior and interior architecture, visible in every major public space with a view to the exterior.

Visitors to all three theaters in the complex enter through the main building’s lobby. The elevators that bring visitors from plaza level to the Claire Tow Theater are encased in channel glass and fit precisely into the space of three concrete ceiling coffers of the existing Saarinen building. When the elevator doors open at rooftop level, visitors are presented with a grand view of the outdoor terrace, the Claire Tow Theater Bar and Terrace. The 1,885-square-foot east-facing terrace affords unique and spectacular vistas of the rejuvenated Lincoln Center campus and surrounding area. The handsome ipé wooden deck, Forestry Stewardship Council certified, is highly resistant to weathering. The terrace extends from the Theater Lobby, providing a beautiful space for seasonal special events.

Anticipating a LEED Silver rating, the building features efficient systems and sustainable strategies, including a green roof that covers 44% of the site footprint with eight types of native plants and low maintenance sedum. The plan organization wraps the energy-intensive theater space with other program spaces, reducing heat gain and loss from the theater space and allowing other daily use spaces to have daylight and views.

Like the theater itself, which must being anew with each performance, this homage to Saarinen’s legacy renews appreciation of the formal principles that distinguish his architecture. It is a clear, contemporary expression of new activities necessitated by the growth and artistic aspirations of Lincoln Center Theater.

The Lincoln Center Theatre, LCT3 greenroof project measures 5,424 square feet and utilizes 1,356 (2ft x 2ft) Green Roof Blocks which were pre-grown by Jost Greenhouses in St. Louis for two years prior to delivery. They were propagated with multi-species sedum plugs and augmented with cuttings to help fill them out. The installation date was April 2012. The green roof is visible from the lobby and from the corridors extending the length of the building on the first and second tiers.

The Hypar Pavilion living roof, built in 2010 using the American Hydrotech greenroof system, can be seen below the LCT3. See the Lincoln Center Hypar Pavilion in The Greenroof & Greenwall Projects Database.

The deck of LCT3’s Claire Tow Theater offers stunning views of the surrounding Manhattan skyline including Avery Fisher Hall, the Metropolitan Opera House, Julliard, the Empire Hotel, Time Warner Center, and the fountain in the Center’s main plaza. And the adjacent greenroof helps to cool the space, allowing patrons to relax and enjoy refreshments and conversation before performances.