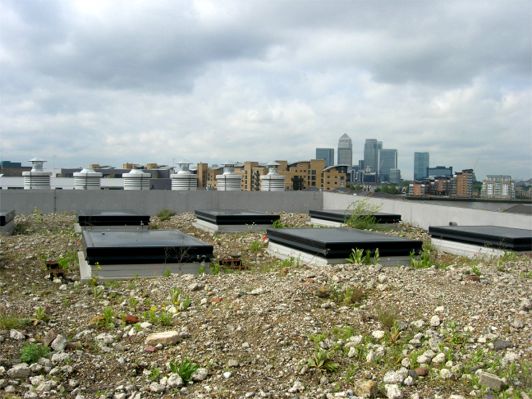 Located in the Thames corridor within inner London, the Deptford Creek area has several extensive brownfield greenroofs, first of which was put on the award-winning Laban Dance Centre, designed by Herzog & De Meuron. The building won the RIBA ‘building of the year’ award, and Herzog & de Meuron won the Stirling Prize for the Laban Dance Centre building in 2003. The Laban Dance Centre is the first of several landmark developments in Deptford Creek. The building has the first ‘brown’ roof ever built in London for Black Redstarts.Urban recovery was the task for Deptford Creek which had declined over the years from neglect and misuse. Among other factors, improvements to the area demanded redevelopment of derelict sites and the protection and enhancement of the local environment. Brownfields became common here providing habitat and breeding areas for native birds, plants and insects. Work has since gathered pace, partly due to their linking up to Stephan Brenneisan’s research in Basel, Switzerland, and also bringing the UK’s own ideas into action through circumstances, and rigorous promotion and advocacy. In this regard, particluar credit goes to Dusty Gedge of Blackredstarts.org.uk and Livingroofs.org.uk.

So as it turned out, biodiversity was the driving factor for redevelopment, and in particular one highly endangered bird – the black redstart – was a key factor in the regeneration game. The ‘brown’ roof is 400m2 and is constructed of crushed concrete sourced from demolition material from the site prior to construction.Laban offers guided tours of the building focusing on the architecture and how this integrates with their activities.