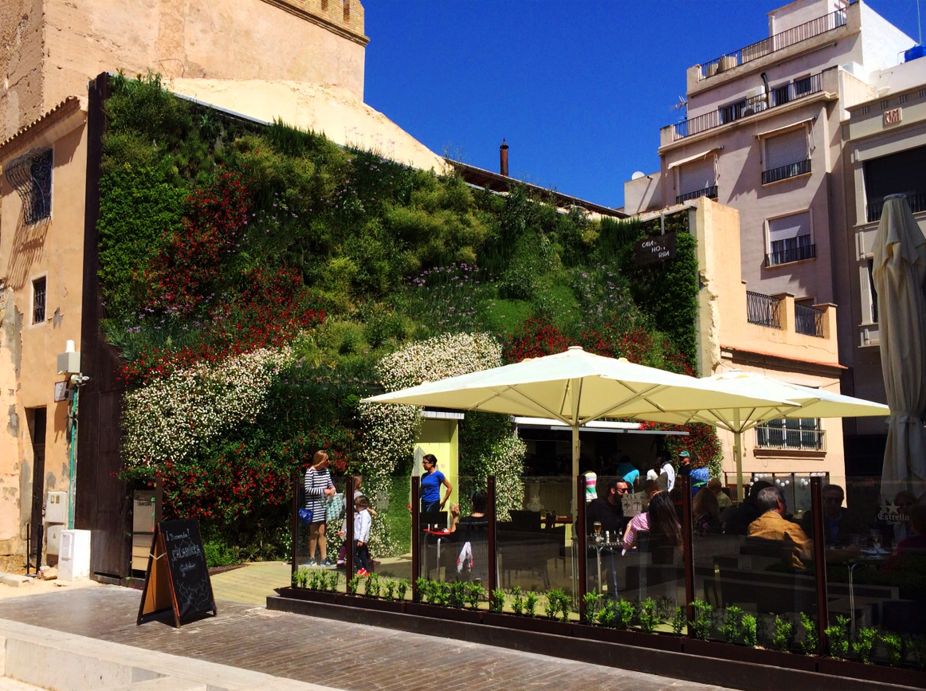 Torre de la Calahorra, Elche, is located at Carrer d’Uberna, 14, 03202 Elx, Alicante, Spain. Watch the 2:29 La Calahorra Green Wall – Project of the Week 9/14/15 video from Greenroofs.com on the greenroofsTV channel on YouTube. Greenroofs.com Project of the Week video photo credits: All courtesy of Paisajismo Urbano except for the Elche Basilica by José Manuel Pérez – Fotografía propia. Licensed under Public Domain via Commons and Elche Panorama by José Carlos Díez (Own work) [CC BY-SA 2.5], via Wikimedia Commons.

The Calahorra Tower, or Torre de la Calahorra, is a rectangular Almohad style fortification, built between the late twelfth and early thirteenth century. Part of the ancient wall that surrounded the medieval village of Elche, it defended the entrance to the regional area of Alicante and previously served as the governmental seat. Originally exceeding 25 meters in height, the present day wall measures 15 meters high after the earthquake of 1829 caused serious damage to the two upper parts, which had to be dismantled. The Calahorra Tower now houses a variety of exhibitions. Its location in the city center makes it one of the reference points for both citizens and tourists due to its proximity to the Basilica of Santa Maria (Saint Mary), the most prominent church in the city of Elche.

Located at the back of the tower is the square of Santa Isabel and despite its excellent location, the small urban area previously held no defined use. To revive the zone, architect Antonio Maciá designed a project which combined a cafeteria to serve as a destination and a reason to visit, and a vertical garden, to increase its attractiveness and bring many benefits to the city.

The inclusion of a green wall in architectural projects in underutilized spaces is increasingly common as it offers relevance and visibility to the site due to the media coverage generated, while at the same time it decreases the carbon footprint generated by the construction activity.

The prestigious architect Antonio Maciá selected the vertical gardening system for facades patented by Paisajismo Urbano, which guaranteed the construction success of the vertical composition and the survival of the species planted in long term, determinant factors prompting him to choose this system.

Situated on the party or flank wall adjacent to La Calahorra, both the design and the installation of the vertical ecosytem were carried out by Paisajismo Urbano, using their own patented system. This specialized firm has implemented more than 20,000 square meters of green walls in the last ten years, allowing the architect the assurance that the vertical garden would meet the construction requirements of this intricate project.

Adding to the challenge of combining a coffee shop within a vertical garden was the complexity that because the structure was a historic building, the new architectural element could not touch the original facade. To solve this issue, a metal structure had to be constructed for the vertical garden for plant support.

The implementation of the vertical garden began in early November 2014, ending a month later. Using its unique patented system, Paisajismo Urbano constructed the metal armament to contain the system elements which includes automated drip irrigation. More than 3,000 plants belonging to 15 species of 5 different families were used, mostly endemic to the Mediterranean region. It is estimated that the green wall will produce about 90 tons of oxygen and retain about 10 kilos of metals from the atmosphere annually.

After finishing the building process, the “vertical garden cafe” has become a new landmark for citizens, and its location has evolved from being a deserted area to having a continuous flow of pedestrians who can now enjoy a drink while watching a little piece of jungle in the city.
Currently the cafeteria has been open for eight months and continues as a great success.