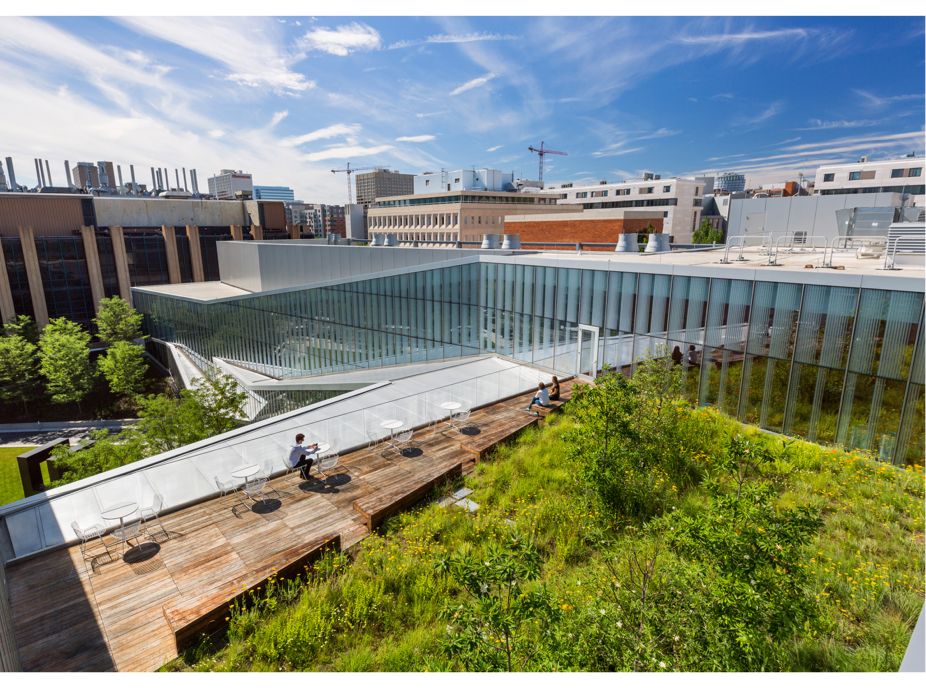 Learn about Roofmeadow in The Greenroof & Greenwall Directory.

Constructed from 2008 through 2013, the Krishna P. Singh Center for Nanotechnology of the University of Pennsylvania is a premier $91.5 million research and teaching laboratory facility that integrates state-of-the-art nanotechnology equipment. The 78,000-gross-square-foot facility houses several multi-user experimental laboratories critical to advanced research and development in nanotechnology.

The newly-opened Krishna P. Singh Center for Nanotechnology demonstrates the University of Pennsylvania’s leadership in the emerging field of nanotechnology. Nanoscale research is at the core of cutting-edge breakthroughs that transcend disciplinary boundaries of engineering, medicine, and the sciences. The new Center for Nanotechnology contains a rigorous collection of advanced labs, woven together by collaborative public spaces that enable interaction between different fields. The University’s first cross disciplinary building, the Singh Center encourages the exchange and integration of knowledge that characterizes the study of this emerging field and combines the resources of both engineering and the sciences.

“In addition to the laboratory spaces, the building features a courtyard, public galleria, a forum space and high-profile conference rooms. The building has achieved a LEED Gold Certification, a “green” building program for energy savings, water efficiency, CO2 emissions reduction, improved indoor environmental quality, stewardship of resources and sensitivity to their impacts. These efforts include a “green roof” to capture 90 percent of storm water runoff, the diversion of construction waste from landfills and the optimization of the building’s energy performance to at least 17.5 percent beyond industry requirements,” (Singh Center for Nanotechnology).

Both the University and Philadelphia have a tradition of organizing buildings around open quads. While laboratory buildings are typically organized around a central corridor that affords little public space, the Center for Nanotechnology inverts this model, focusing the laboratories around a new central quad. This convergence of architecture and landscape at the heart of this project provides a new indoor/outdoor open space for interaction, allowing panoramic exterior views, opening the sciences to the University landscape, and making research activities highly visible. A public galleria is situated between the lab and exterior enclosure to function as an inhabitable lens. The separation of interior and exterior space becomes blurred through the use of frit patterns and mirrored effects in the glowing galleria.

The potential dialogue that is created by weaving vibrant public spaces for research and interaction with intensive lab spaces for hands-on production is at the core of the Singh Center’s design. The public galleria at the building’s entry is centralized around a monumental stair, highly visible to draw students through the double height space. The stair hosts flexible lounges to encourage work and allow collaboration to take place throughout the building.

The spatial sequence spirals upwards around the galleria and unfurls around the courtyard to culminate with a multipurpose forum—a room contained within the building’s cantilever for lectures, receptions, and meetings – cantilevering sixty-eight feet over the courtyard below and offering a perch for taking in the view toward the historic core of Penn’s campus. Defined by a 1.7-acre central campus green at a new gateway to the campus, the Singh Center ascends as a spiral of research, reaching its highest elevation at the forum, opening to views of both the city and campus.

The center has two green roofs that crown the cantilevered volume – one lower, partially accessible intensive roof with native plants and one upper extensive roof with sedums. They are considered a “miniaturization” of the building’s courtyard. The Roofmeadow Type III Savannah Intensive Vegetative Roof Assembly was installed by G.R.A.S.S. in conjunction with EDA Contractor for the University of Pennsylvania Krishna P. Singh Center for Nanotechnology. The state-of-the-art green roof utilizes an air layer; root barrier; capillary water retention layer; 3 inches of drainage media and 3 – 50 inches of growing media.

The growing media in the extensive green roof area is 3 inches thick (at its thinnest), the media in intensive green roof area is 6 inches thick, and the media in tree pits, which are part of the intensive area, is 50 inches thick. Planted over almost 9,500 square feet are assorted sedums and native trees, perennials and grasses. Planted by Roofmeadow, a great selection of native perennials have benn established from seed and appear to be thriving in both the extensive and the intensive green roof areas. The company is looking forward to seeing what comes up this spring, but they have had success with Monarda punctata, Bouteloua curtipendula, Rudbeckia fulgida, Gaillardia pulchella, Echinacea pallida and Lespedeza virginica.

The Krishna P. Singh Center for Nanotechnology is the 2015 Recipient of the Institute Honor Awards for Architecture from the AIA.