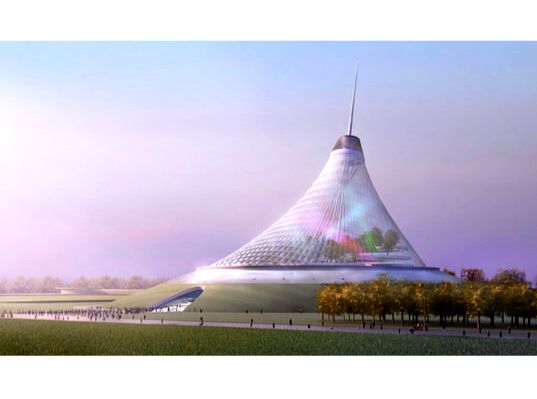 Visit the Khan Shatyry Entertainment Centre website. Read “Khan Shatyry?s 150 Metre Mast is Up!” by Dave of Decemmber 15, 2008 in Contemporist here where you can see some great photos and graphics, too. See the Inhabitat posting of March 26, 2007 by Emily. View images and the Design Intent of the architect, Foster + Partners, here,

Under construction in 2006 – 2010, the Khan Shatyry Entertainment Centre was completed in mid July, 2010. According to Inhabitat, see below, the Khan Shatyry (“Royal Marquee”) Entertainment Centre in Astana, will become a dramatic civic focal point for the capital of Kazakhstan, Central Asia. The soaring structure, at the northern end of the new city axis, rises from a 200m elliptical base to form the highest peak on the skyline of Astana.”The most critical phase in the construction of the Khan Shatyry Entertainment Centre in Astana, the capital city of Kazhakstan, has successfully been completed with the erection of its 150 metre-high tripod mast. The 2,000 tonne structure was lifted into place by four cranes in a process that took two weeks,” (Contemporist, December , 2008).

“The entertainment centre will house 100,000 square feet of public park, retail, and entertainment space. Developed as a response to harsh weather conditions in both winter and summer, Khan Shatyry is held up by a central mast and clad in ETFE.”The centre will also include an interior park, undulating terraces, a river, wave pool, and waterfall, all lit by a high-tech roof lighting system seamlessly integrated into the structure. Other public spaces include cafes, restaurants, and movie theatres. The pinnacle of the building, literally and metaphorically, will no doubt be its viewing deck terrace, offering dramatic views of the park and city.”The architect’s website, Foster + Partners, says “A tropical water park weaves its way through the landscape and its wave pools, river and waterfall are lit by roof lights that are seamlessly integrated into the design. The highest terrace is a viewing deck which will offer dramatic views over the park. At the core of the building is a large flexible space that will form the cultural hub of the centre, accommodating a varied programme of events and exhibitions. Complemented by 40,000 sqm of retail space with a wide range of cafes, restaurants and cinemas, as well as ample covered car park facilities, the Khan Shatyry will offer leisure facilities for all.”