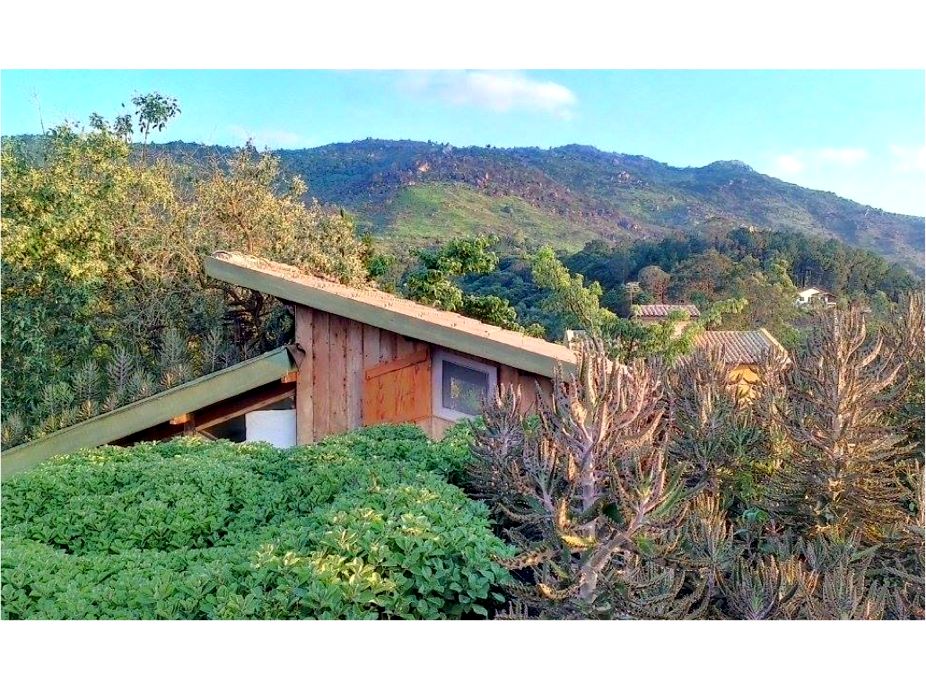 The Architecture Office site used to be a Tai Chi Chuan school. It was built as a veranda, using green and tile roofs, in the city of Atibaia. The city of Atibaia – 126.603 inhabitants, latitude 23º07’01″S, longitude 46º33’01″W and altitude 803m – is in the state of São Paulo, Brazil, located approximately 70km from the cities of São Paulo, Campinas and São José dos Campos. The building is located in San Fernando Valley neighbourhood, in Itapetinga Mountain Range at approximately 0,5km from the newly created Pedra Grande Natural State Monument. It’s an area with few residences and vast vegetation.

A research was made, which resulted in a master thesis, comparing the thermal comfort offered by the tile and the green roof of the building. The green roof showed to be efficient to provide a thermal delay and to transmit a more stable temperature to the area, after all, the analyses of the internal surface temperature showed that the green roof provided an attenuation of up to 9ºC compared to the tile roof at the hottest hours of the day and a delay of up to two hours.

The building needed to be modified to be used as an architecture office. Based on the research of thermal comfort, it was decided to change the roof of the whole building into green roof, to obtain a great thermal comfort and all the other benefits that the green roof offer, such as water retention, habitats for small animals, etc. So, the project of the office was made using a green roof. A living wall was projected on the wall facing west (the hottest face in Brazil). An access to the roof was designed so people could easily walk on the roof. The building materials and techniques were selected according to their sustainability and life cycle. The walls are to be made of modular soil-cement brick and of wattle and daub; part of the floor of used beer bottles. The beautiful view was taken into account during all the design process.

Construction of the office began in March 2013 and is supposed to be finished by the end of the year. In Brazil, in the past, pillar of round wood were used as light poles; which have been replaced for concrete ones; these used pillars were used as structure of the roof and walls. All the other wood needed for the structure of the roof was bought in demolition sites.

The green roofs are designed to have:
• Reused wood and OSB panels as structure;
• A waterproof membrane to protect the OSB panels;
• A drainage layer made by Maccaferri;
• A 15cm thick growing medium;
• Varied native plants.

All the water from the roofs is to be sent to a cistern and used for flushing and watering the plants, specially the ones of the living wall.

The living wall is designed to have:
• Metallic structure;
• Naval panels;
• A container made of a drainage layer made by Maccaferri;
• Growing medium of coconut fiber;
• Varied native plants.