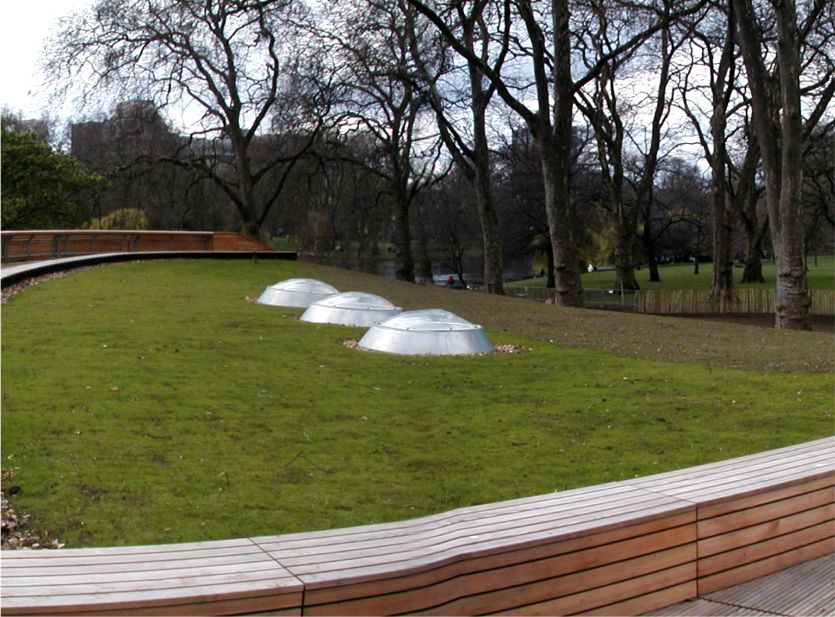 See the Livingroofs.org case study on their website here.

Situated on the former site of The Cake House, Inn the Park, St. James?s Park London is a new restaurant that is turning heads. Located between Buckingham Palace and Horse Guards Parade, the aesthetics of this project were of the utmost importance with the domed roof having to be totally encapsulated in green to blend in with the surrounding park.Taking six years to come to fruition due to sensitivity and funding issues, Bauder?s green roof proposals had to be totally flexible to accommodate the changes in the design over the said years which continued right up until the last minute. As the roof was to be subjected to foot traffic, it had to represent a rooftop garden and not act as just a masking material.

The Bauder Intensive Green Roof System met the criteria exactly. Able to cope with heavy foot traffic whilst being as easy as any standard garden to maintain, its incorporation allowed Inn the Park to nestle into its surrounds and invite people to come into the new restaurant housed beneath. The introduction of the Bauder Yellofoam insulation into this project enabled a full bond of the waterproofing direct to the concrete structure. With an Intensive Green Roof already installed over the Gallery Shop at the Tower of London, Bauder were more than able to meet the exceptional high standards associated with any project of royal connection.?Any renovation within The Royal Parks must preserve the Parks? central themes of personal space and ecology. For the replacement of the Cake House with Inn The Park in St. James?s Park, we wanted a practical and visual approach which allowed us to continue the park up and over the top of the building in one seamless curve. With Buckingham Palace as the backdrop, Inn The Park?s outer shell had to harmonise with its surrounds completely. Bauder?s green roof solution fitted our criteria exactly and provides the public with an aesthetically intriguing feature that allows them to walk onto the roof and caf? terrace without leaving the essential atmosphere of the Park behind.?