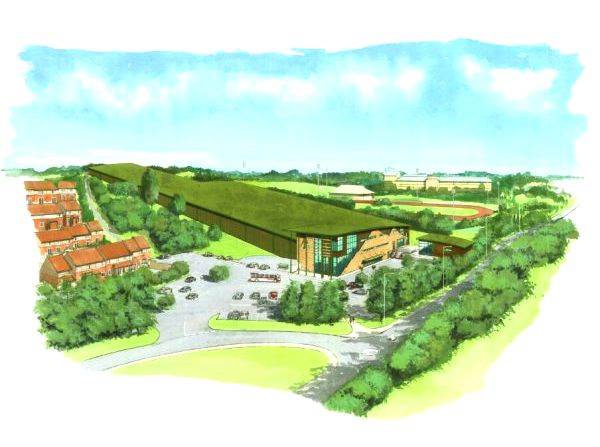 Visit the Hemel Ski Centre website, where you can follow along with construction by watching a Live Project Feed webcam, too. Read the story in the easier.com Travel section April 17, 2008 here, and the Hemelhempstead Today News of December 15, 2006 here.

Hemel Ski Centre is an indoor snow center which was given the go-ahead at the end of December, 2006, to proceed with plans for a giant grass roof to mask the building. The ?23 million venture will transform the original ski-mat slopes at Hemel Hempstead?s Hemel Ski Centre into a state-of-the-art indoor Snowcentre ideal for novices, experienced skiers and snowboarders alike.The project has taken two years to plan in consultation with builders Sir Robert McAlpine Ltd, and the meticulous design will feature one of Britain?s biggest living roofs covering the entire length of the slope, making it visually unobtrusive and environmentally friendly. The roof will help to insulate the new ski center and collect rainwater which could be re-used on the site. Trees at the front of the site along St Albans Hill will be retained and mature trees will be planted on land around the new ski center.

Work was expected to start and finish in 2007, but commenced in April, 2008. easierTravel of April 17, 2008 states, “The work which will involve re-grading the natural landscape to build purpose-built slopes is expected to take a year and the new Snow Centre will open in April 2009.” The new Hemel Ski Centre is expected to attract around 150,000 skiers and snowboarders each year. Once completed, the new center could have one of the largest grass roofs in the UK.