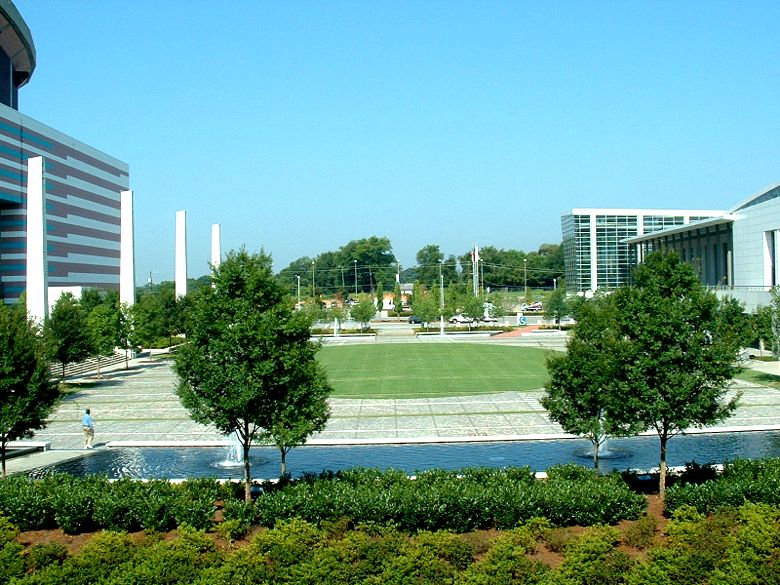 Learn about Saul Nurseries, ItSaul Natural, and PermaTill in The Greenroof Directory.

Opened in June 1996, the Georgia International Plaza is located in the heart of downtown Atlanta and sits atop seven levels of parking structure. Stalite expanded slate was specified for Georgia International Plaza and the lawns which have approximately 15″ of engineered soil covering 15″ of lightweight Styrofoam fill. The PermaTill website states “The Georgia International Plaza is a seven acre rooftop garden over a 2,000 car parking deck. The project is situated between the Georgia Dome and the World Congress Center. During June of 1996, over 12,000 cubic yards of lightweight soil mix was placed by conveyor and compacted on the rooftop plaza. The plaza portion of the project was designed by Leslie Design Associates, Inc. in Atlanta. The mix consisted of 50% sand, 35% PermaTill (Stalite 5/16” expanded slate), and a 15% organic amendment. Several acres of Emerald Zoysia sod, 192 trees, 7,000 shrubs and 24,000 herbaceous seasonal color plants were planted just a few weeks before the 1996 Summer Olympics started.

“In 98 degree temperatures, the sod was laid and trees were planted in full leaf. This plus constant irrigation normally would have taken its toll on newly planted material. Add the foot traffic of millions of Olympic visitors would make you think the soil under the turf would be compacted to the point that no roots would penetrate it. After the Olympics, only one tree died and the turf recovered remarkably well. By the next spring the trees, turf, and other plant material were thriving. Root penetration was extensive. This remarkable growth continued throughout the summer. Because of the porosity of the soil, the heavy irrigation to establish the turf had no adverse affect on the trees. This is one of the many benefits of an engineered soil mix. Soil percolation and water retention can be determined in the laboratory, then the mix can be designed to meet the specific needs of the micro environment.” (2007, www.permatill.com/gardensoil.htm)