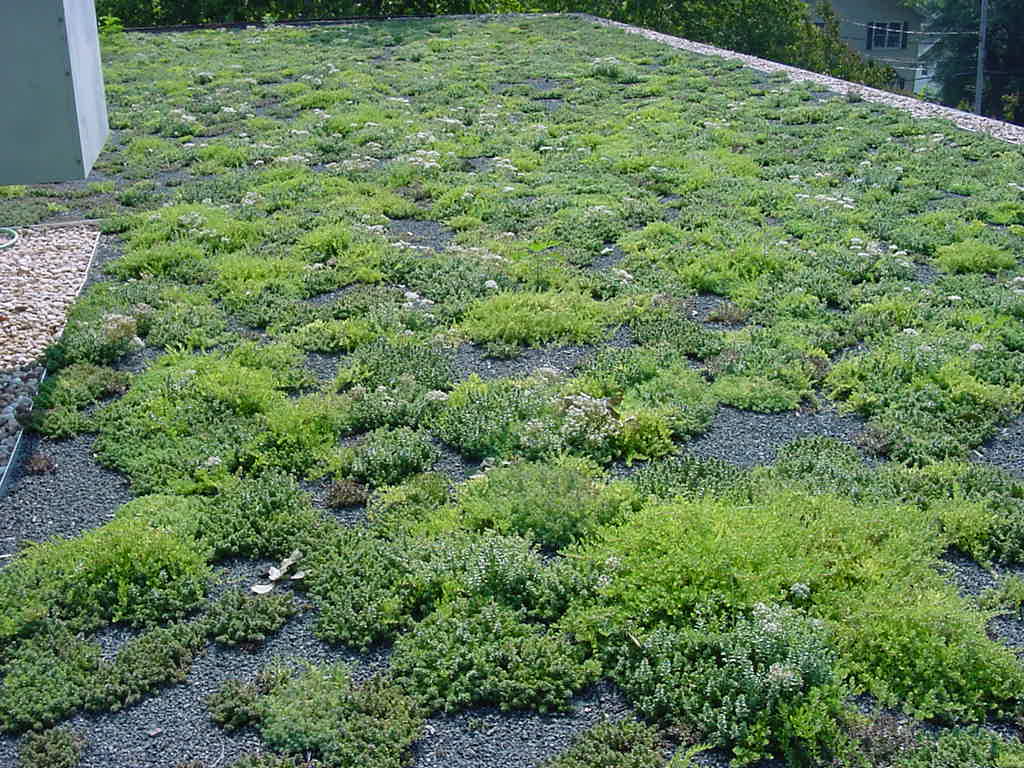 The owner of the building was intriqued by the concept, specifically looking for the benefits of stormwater management, energy savings and the potential public relations bonanza of being one of the first in this area to install this type of roofing system. The building had lost its tenants, needed a new roof anyway and provided the owner a great advertising advantage.

The deck is 3″ poured gypsum. The original roof was comprised of a mechanically attached base sheet over the gypsum deck and a smooth built-up roof. This had been topped with a 1″ polyurethane foam roof and aggregate surface. The scope of work included removal of both existing roof systems and all related metal work. We chose a two ply Modified Bituminous System manufactured by Famos of Germany and distributed by their USA agents, Building Logics of Virginia Beach, VA.The green components we initially chose to use was a pre-grown vegetation mat, as it had been successfully utilized on the Ford Motor’s project in Michigan and provided a lightweight, easy to install alternative. This was originally completed in May of 2004 and by the summer’s end had failed significantly, with most of the plants having died, with only a few areas, primarliy under shade, that were still alive. Investigation of this plant failure seemed to indicate that the pre-grown mats did not tolerate well the intense heat and dry conditions that hit the upper plateaus of South Carolina, shortly after the installation had been completed.Several attempts to work out this problem with the supplier of the pre-grown mats did not produce the desired results, so the roof supplier, Building Logics, at their own expense, provided new growing media, plants and all labor to re-populate this roof in the September of 2004. As of June 2005 this roof is almost 70% covered and is thriving! The owner is thrilled and very satisfied with the end result. By next year this roof should have 100% coverage. The good news is the owner got what he paid for, paying nothing more then the orignal contract price. We were very pleased with Building Logics and how they responded the problem encountered, less so with the provider of the mats and added to our own knowledge base.