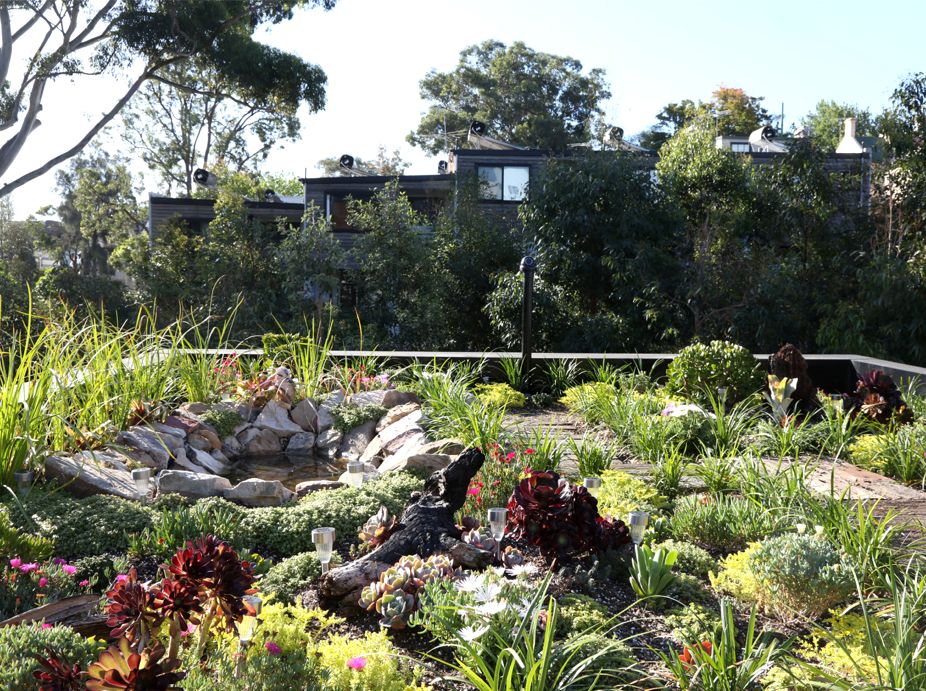 Learn about the following companies in the Greenroofs.com Directory: Sika Sarnafil and Elmich Pte Ltd.

*This Project Profile is the same as the Forest Lodge ECO House Vertical Gardens except for the total greenroof area size, photos, and Designers/Manufacturers of Record.

Forest Lodge is located in the heart of Sydney’s heritage precinct, just five minutes from the Sydney CBD. Code Green Pty Ltd, the designers of Forest Lodge ECO House, specialise in the consultation, design and construction of sustainable building projects with the aim to evolve urban environments into green living spaces.

Having designed every facet of the project from the external façade, green roofs, vertical gardens, interiors, fittings, and furnishing enabled Code Green to ensure that the philosophy of the design flowed seamlessly throughout every element of the project. As the surrounding properties reflected the history of the area, this house was to add to that timeline by not trying to recreate the past, but to forge its place in the present showcasing the best of contemporary design ideas.

Eco design principals were used to create intelligent innovative design. Many of the systems were custom designed and built specifically for this house, providing innovation not yet seen in Australia. The 3.9 metre-wide vacant land was one of the last original vacant blocks in the city that had never been built on. As a result, the City of Sydney Council encouraged a contemporary design that would be distinctly 21st century. Designer Constructions’ design encompassed an ECO philosophy utilizing sustainable materials wherever possible.

Externally, vertical gardens feature strongly with a seven-meter high vertical garden adjacent to the equally high entrance door, among others. Due to the limited depth, for this project we recommended the Code Green Wall system, a potted plant system, using multiple components. Flowering Green Roofs not only supply insulation for the home, but also offer aesthetically pleasing views for their neighbours and an environment for the local insects and birds to dwell with logs, a small rock-lined pond, and wood sleepers for the path.

There are two green roofs on this project. One is located over the main roof and the other on the lower storey roof, which is about 4m2. The green roof system was placed on a structural concrete rooftop slab. It has been waterproofed using a Sika Sarnafil membrane. A leak detection system was installed by ILD Australia. Elmich Versi Drain P25 was installed and then covered using a geotextile fabric. The soil medium was specially formulated by Code Green which was designed to be a lighter weight nutrient rich formula with a maximum of 2.5 inch thickness. The plants were propagated off site prior to the commencement of the construction allowing the plants to grow during this period. Various grasses, Sedums, Delospermas, and other succulents were hand planted on the roof, which is unirrigated.

Rooftop solar tubes were incorporated to provide heat via an underground storage cell, and provide heat to also the ground floor concrete slab for thermal mass heating as well as the hot water tank. A 3,500-litre water storage tank feeds not only the roof top garden and vertical gardens, but also the rear garden’s centrepiece, a suspended table waterfall. Among other sustainable features, the walls were constructed using a combination of new and secondhand bricks. The finished building stands as testament to current design, complimenting the neighbouring heritage terraces and placing it in the urban history of the city of Sydney.

Since its completion, the Forest Lodge ECO House has been featured on several television series including “Grand Designs Australia,” “Better Homes & Gardens Australia,” “Australia’s Best Houses,” and CNN. It was officially opened in January 2014 by the Lord Mayor of Sydney, Clover Moore.