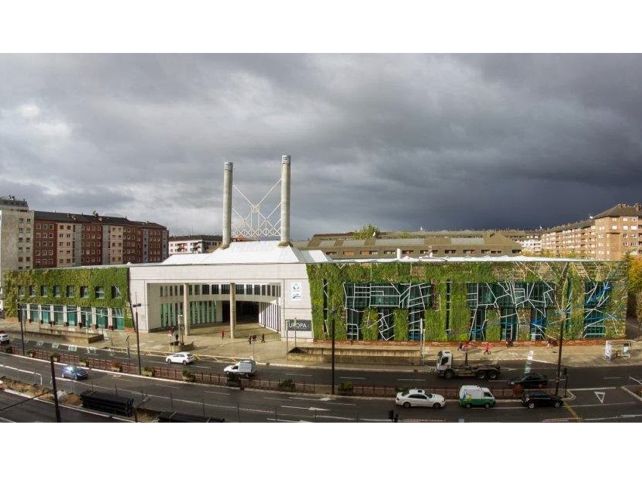 Designated the 2012 European Green Capital because of its biodiversity and integration of greenspace into its urban fabric – in particular its Green Ring – Vitoria-Gasteiz is the capital city of the Basque Autonomous Community and of the province of Álava in northern Spain. Located in Vitoria-Gasteiz, the Europa Congress and Exhibition Hall is a multi-purpose venue for fairs and conferences. It also has a multi-use area for events for 1,000 people or commercial exhibitions for more than 60 booths.

In an effort to bring Álava’s ecosystems to the center of the city, in 2013 a large greenwall was designed and installed on three sides of the building by Urbanarbolismo and SingularGreen in association with Urbaser and Zikotz. Encompassing a total vegetative surface of 1,492 m2, 1,000 m2 consist of a F+P hydroponic system and 492 m2 of climbing plants that cover the windows. Over 33,000 native plants of different varieties were planted from the area of Álava and the Basque Country.

Another primary motive for the beautiful and distinctive Palacio de Congresos living wall was to capture energy savings. The “f+p preplant” system adds a thermal resistance of 2,644 m2.K/W, representing a 270% increase over the existing facade insulation.

The design draws on the ecosystems that exist in the vicinity of Vitoria-Gasteiz and represents them along the length of the facade. From left to right are the vegetative communities of the “Humedales de Salburua” – the Salburua wetlands; countryside agricultural field plots; loamy hill ecosystems; and the beech forests of the local Vitoria mountains.

At the base of the greenwall a continuous backlit Corten steel seatwall integrates informative signage, allowing visitors in both Spanish and Basque to learn about the various ecosystems that are reproduced in the vertical garden along with the plant species that comprise each. 97% of the species used in the vegetated facade are indigenous to the area, many of them endemic of Álava. According to the designers, this is the first vertical garden that reproduces native ecosystems from the area where it is located.

The use of native plants in the design has been one of the main challenges of the project, as many of the plants in the environment of Vitoria are adapted to the plateau climate’s periods of drought and are struggling to survive in the conventional moist environments that most vertical gardening systems provide. For this project the designers have redesigned the f + p system to adjust and optimize substrate saturation so that these plants can fully develop. The hydroponic system used offers optimum conditions of nutrients, pH, conductivity, and moisture for this type of vegetation; the entire system is monitored by remote control in order to save water and energy and control the development of plants.

Resuming the tour of the plant material from left to right we first see the vertical Salburua wetlands in a formal pattern. The species used here are typical of wetlands in the area including Scirpoides holoschoenus, Cyperus longus, mairii Carex, Juncus maritimus, Juncus acutus, Cirsium monspessulanun, Tetragonolobus maritimus, and Lysimachia Ephemerum.

In the center of the facade, thin aluminum strips represent the structuring of Álava field plots. Within this space an area has been allocated for a Vertical Garden Farm where seasonal crops are planted. The photos here show winter season plants such as garden cress and lettuces.

The structure profiles become more organic in the Vertical Forest found in the northern zone of the facade, based on the shape a river. This is the area that reproduces the ecosystems of the hills and mountains of Vitoria. Some of the species used are Ribes alpinum, Sorbus aria, Crataegus monogyna, Prunus spinosa, Erica vagans, Genista occidentalis, Globularia nudicaulis, Teucrium pyrenaicum, Bromus erectus, Carex humilis … even two species of trees are planted: beech, Fagus sylvatica, and yews, Taxus baccata.

Large windows will be covered by deciduous vines that allow the passage of sunlight in winter and protect the building from the summer heat, creating a biologically eco-efficient building. The river profile, which structures the vertical forest design, is illuminated at night by low-power LEDs creating a unique walking environment, unmatched in the center of Vitoria-Gasteiz.

The Corten steel base not only provides educational information on the greenwall garden and ecosystems of the city, but also becomes a seating space for relaxation and conversation within the vertical park.

“We were surprised how quickly nature opened up to the vertical garden; thanks to the native plants the garden has been colonized by all kinds of insects and animals. Birds have been quick to appear, here you see an image of a magpie foraging.” ~ Urbanarbolismo and SingularGreen

The striking framework of aluminum strips straddle the building and delineate the various zones. Portions on two sides are illuminated at night, making the convention center a dramatic focal point of the city. In 2015, the City of Vitoria-Gasteiz won first place in the sustainable construction category for its Europa Congress Palace Convention Center from “Los Premios de Construcción Sostenible de Castilla y León” and in 2014 was included in “Prácticas de Excelencia Ambiental 2014 de Ihobe.” In 2014 the building was certified as a PassivHaus, “Edificios de Consumo Casi Nulo (ECCN-nZEB)” – Almost Net-Zero Enery Building from the “6ª Conferencia Española de PassivHaus.”