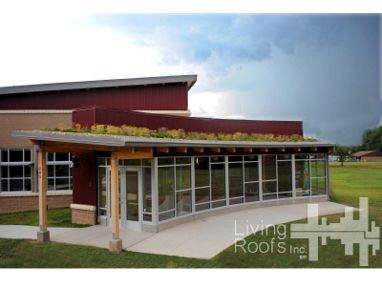 Learn about Living Roofs, Inc. in The Greenroof Directory.

Located in central Asheville, the City of Ashville named their new community center after the late pastor, Dr. Wesley Grant, Sr., who founded the Worldwide Missionary Baptist Tabernacle Church in 1959 and served for nearly 50 years. He was a prominent leader in Asheville’s African American community during the time of the Civil Rights movement and the period of Asheville’s urban renewal in the 1960s and 1970s.

The Dr. Wesley Grant, Sr. Southside Center is home to a variety of creative programs for all ages. The center features classrooms and an auditorium with a stage, and uses a geothermal HVAC system, skylights, and sports a living roof; it is the first facility constructed by the City of Asheville to be LEED Platinum certified. The center was designed with three phases in mind — cultural arts, physical activity and community. The first phase was completed in October 2011, after almost two years of design and construction.

“Located on an underutilized ball field adjacent to an established inner city neighborhood of small homes and public housing and sitting at one of the gateways to the River Arts District, this facility is envisioned as a new prototype of community center,” (Matthews Architecture PA ).

Living Roofs, Inc. installed the pair of green roofs on the new Dr. Wesley Grant, Sr. Southside Center in Spring 2011. In 2007 the City of Asheville passed a resolution requiring all new City buildings to be LEED certified and the Recreation Center is the first in hopefully a long list of future projects. Living Roofs, Inc. says “We are proud to be a part of this team of pioneers.” The green roof is an extensive built up system planted with a variety of drought tolerant Sedums and other hardy perennials.

“During construction, more than 75 percent of all construction waste was diverted from the landfill and recycled. Building materials were sourced locally when possible, and all the wood used was Forest Stewardship Council-certified. Six geothermal wells were dug to supply the building with heat from the earth. While installation cost more on the front end than traditional HVAC, geothermal systems saves money and energy over time. In winter, the pump pulls heat from the wells into the building. During summer, the pump is reversed so it removes heat from the building and disperses it into the ground. [Architect Jane] Mathews also touts the two vegetative roofs as having lots of positive environmental impacts. “They provide visual relief, extra insulation and lower the degradation of the roof while needing little to no maintenance,” she says,” (Western North Carolina Green Building Directory, 2012).

“The $2.9 million center construction was funded by a number of contributors including the Eaton Charitable Fund, Glass Foundation, Janirve Foundation, Junior League of Asheville, the Raise the Roof at the Reid Community Campaign and the City of Asheville. Construction of the new center matches priority goals for each funder in that it serves children and their families, and provides a strategic public facility for the Asheville community,” (City of Asheville, 2011).