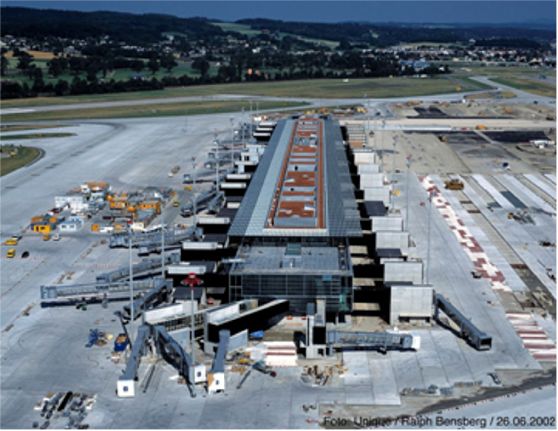 Zurich-Kloten International Airport in Z?rich (ZRH) is the largest airport in Switzerland and strives to symbolize a modern, comfortable and green airport. ZRH is home to a nature conservation area that covers an area of approximately 74 hectares and is only a few meters away from the edge of the runways. ZRH operations and management focus strongly on communication in the area of environmental protection, and publish an annual environmental report. ZRH has two recent large greenroof projects which demanded a high level of effort, coordination, and communication from all participants because of its sensitive location and accompanying security measures.One of the largest greenroof building sites in Switzerland, the new dispatch building at Kloten International Airport is Dock E, previously known as Dock Midfield, situated between take-off runways and landing strips.

One of the largest greenroof building sites in Switzerland, the new dispatch building at Kloten International Airport is Dock E, previously known as Dock Midfield, situated between take-off runways and landing strips. Sporting an extensive greenroof measuring 4,000 m2 (43,056 sf), Dock Midfield represents a perfect example how green space can be regained on roofs. Completed in November 2002 after years of detailed discussions, the planning group decided to install ZinCo greenroof systems. Admittance to the Dock Midfield project was limited to trained staff using registered vehicles, and strict regulations had to be followed to obey the demanding security measures of airport Zurich-Kloten.Limited movement dictated careful planning, for example one issue dealt with how to bring up the substrate and gravel to the 18 ? 22 m (59 ? 72?) high roof surface while crossing a 14 m (46?) wide photovoltaic installation at the roof?s perimeters without any damage. In response, a ZinCo partner?s special vehicle utilized a pneumatic pump and placed the substrate materials onto the roof?s perimeters at three locations, where it was then spread on to the entire surface using flexible pipes at a depth of 80 mm (3?).The roof construction illustrates the not often used variation of the inverted roof in Europe. Particular to inverted roofs is the fact that the insulation layer is situated over the waterproofing. ?There are two main subjects that have to be taken into consideration when planning a well functioning Green Roof System on top of an inverted roof,? says J?rgen Ullrich of ZinCo. ?First of all, the insulation material must maintain its insulating effect even during penetration by water. That means that inverted roofs require extruded insulation. Secondly, the Green Roof build-up must be designed so that vapour pressure can be built up.?Separation and slip membrane TGV 21 covers the extruded insulation mats and serves as the base for the recycled ZinCo substrate. TGV 21 is permeable for vapour but resistant to water, necessary qualities for the installation of a ZinCo Green Roof System on inverted roofs. The vegetation consists of Sedum shoots at 20 ? 25 pieces /m2 (2-3 pieces /sf) which are drought and frost resistant Sedum plants. Generally, Sedum vegetation is a low demanding type of vegetation, yet fertilizing and maintenance, especially weeding once to twice/ year, has to be done.