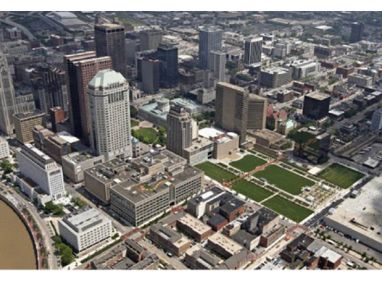 Read May 6, 2019 article in Facility Executive Bringing Rooftop Gardens To Ground Level and watch a video “Columbus Commons: from Desolate Mall to Premier Park” on YouTube. Read the May 21, 2012 Columbus Commons and Scioto Mile to Kick Off 2012 Park Season Over Memorial Day Weekend from PRNewswire and the April 4, 2012 Columbus Commons Apartments Announced by Walker in columbus underground.

See the project profile from ms consultants and read the review from About.com.

The park itself is actually a greenroof over an underground parking garage and includes a $5 million permanent stage and pavilion, which have become key downtown focal points. “A unique feature of the park is that six of its nine acres sit atop the subterranean parking garage that was connected to City Center’s structure and now serve as one of the largest functional green roofs in the United States,” (PRNewswire, 2012).

To create the new park, Capitol South worked with the Georgetown Company as its development manager and a design/build team made up of construction manager Corna-Kokosing, architects Moody Nolan and landscape architects EDGE Group. Phase one was completed in May 2012 with the opening of the new Columbus Bicentennial Pavilion, considered the crown jewel of the Columbus Commons park.

A total of 168,000 sq/ft of J-DRain GRS drain mat was installed on top of the waterproofing. “In order to work within the green roof space constraints, ms electrical engineers installed conduits inside the green roof long before the decision to create the pavilion was finalized. These conduits allowed the engineers to adapt to meet the needs of the final design instead of requiring that the design be modeled around electrical constraints,” (ms consultants, inc.).

The project was developed by Downtown Development Corporation (CDDC) and Capitol South Community Urban Redevelopment Corporation (Capitol South) private and non-profit development organizations. Columbus Commons was born when Capitol South began the process of surgically dismantling the mall space in October 2009. By mid 2010, construction on the park began, with one-third of the site reserved for market-driven development. The Columbus Commons was substantially complete by the end of 2010, and hosted 300,000 visitors at 130 events in its opening 2011 season.

Phase two, the new $50 million private investment HighPoint at Columbus Commons apartments, will be built on approximately two acres of the 9-acre park along with a future 1-acre commercial site (on the corner of Third and Rich streets). The remaining six acres of the site will remain open space, including the Town Street entrance, The Columbus Bicentennial Pavilion, the Grand Lawn and the Bosque of Trees.

After extensive public feedback and collaboration, the space has been transformed into a vibrant downtown park that is activated throughout the year with varied programming to draw people from across Central Ohio. Columbus Commons includes a classic carousel, food vendors, an outdoor reading room, gardens tended by the Franklin Park Conservatory and places for kickball, yoga, movie screenings and more.

As a new Columbus Commons, a common area for the entire community to enjoy, the park supports the ongoing, market-driven development of a truly walkable downtown neighborhood that integrates living spaces with retail office and entertainment opportunities. The park is open daily from 7 am to 11 pm.