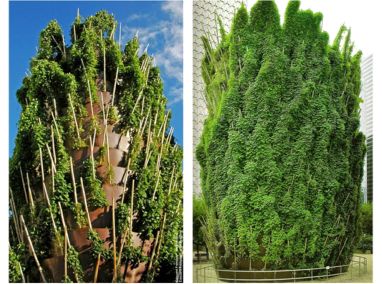 The Cheminée EPAD is located at Commune de Courbevoie, 92000 la Défense, Paris France; http://www.ladefense.fr/en. Download the site guide The Artworks of la Défense.See the project profiles and visit the websites of Edouard François and Patrick Blanc. Read about La Défense in Wikipedia.

Following a 2002 design competition and a 300,000 Euro budget, the Cheminée EPAD in la Défense was completed in 2004 in collaboration with architect Edouard François and botanist Patrick Blanc. The 16 m high former concrete cylinder functions as a ventilation shaft for the underground circulations; most ventilation chimneys in the district are covered in mosaics. Situated in a very prominent plaza location close to the Couer Défense building, the Cheminée EPAD needed to be disguised, and the very creative solution was to clad it in 20 rows of copper planters.

In a twist from a traditional greenwall, these planters were filled with wooden garden stakes and various species of morning glories ascend upwards. A floral climbing cascade of varying colors are enjoyed by all especially from spring through summer.

Instantly recognizable with its unusual cylindrical shape draped in vegetation with spikey garden stakes poking out, the copper patina of the cylinder will slowly evolve from red-orange to green; the vines are replenished and planted annually. The presence of the vegetation contrasts with the smoothness of the financial district’s glass and concrete towers and creates a focal point on the Esplanade.

Today the area is vibrant and bustling, full of a wide variety architectural styles, public spaces and artwork. “The greatest artists, from Calder to Richard Serra, including Miró and César, have made their mark on the district. At present there are 67 monumental works, making this the largest open-air contemporary art gallery in France,” (La Défense website).