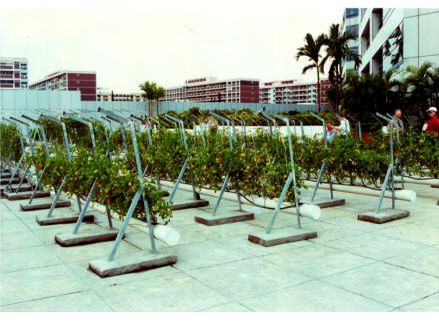 Visit the Changi General Hospital website here to read all about the hospital’s numerous environmental awards and more. Read the Greenroofs.com November/December 2005 Guest Feature article by Geoff Wilson entitled “The next profit frontier for green roof companies is?FOOD FROM THE ROOF” here.

The Changi General Hospital website states, “The hospital has made caring for the environment a priority, because the long-term benefits and savings help both people and the surroundings we live in. Patients are often worried and frightened when they come to a hospital. By beautifying the hospital with lots of plants and trees, we wish to create a more serene and restful environment for patients. Similarly, planting hydroponics on the rooftops provides food for the hospital, but also absorbs the heat from the roof, cooling the wards facing it. At the hospital, we also faced huge utility bills. The hospital started to look into ways of reducing energy and water consumption to eliminate wastage. Environmentally friendly practices all around the hospital were employed, such as recycling and management systems for energy and water. The savings derived from all these efforts were channelled towards patient care.”Our greening culture that started in the early 1990s at Toa Payoh Hospital has flourished and spread throughout the Hospital with the Green Fingers Club leading the way. Throughout 1998, projects such as the rooftop hydroponics garden and the compost heap were started, setting a grassroot momentum among staff to care for the environment within the hospital. During that year, CGH staff planted more than 1,300 plants and trees during our monthly gardening sessions. In an innovative effort to cool the wards facing the roof of the podium, the hospital launched a hydroponics project in the same year. The hydroponic plants planted on the rooftop help to absorb heat, making naturally ventilated wards cooler. This project which took off with the assistance of Dr Gregory Chow from the Department of Biotechnology, Ngee Ann Polytechnic, has certainly bore fruits. Among other fruits and vegetables, we harvested more than 190kg of cherry tomatoes that year.”

“Ngee Ann Polytechnic hydroponics lecturer Gregory Chow designed an award-winning intensive greenroof project the 800-bed Changi General Hospital in Singapore. The hydroponic farm is located on the atrium of the hospital. The bare concrete of the atrium roof was a problem in that it diverted sunlight into nearby wards – to cause objectionable glare and heating. The rooftop hydroponics, growing cherry tomatoes and herbs, solved the problem and created a rooftop farm that now supplies patients with healthy fresh food.A survey by Ngee Ann Polytechnic students supervised by their hydroponics lecturer Gregory Chow found that four suburban areas of northern Singapore — about one tenth of the total built environment — had about 212 hectares of apartment and commercial rooftops to grow fresh vegetables, using inorganic hydroponics. Extrapolation of this across the whole of Singapore reveals that that around 1,000 hectares of rooftop space could be available (relatively easily) for urban food production in Singapore.Gregory Chow calculated that about 39,000 tonnes of vegetables a year could be produced from the 212 hectares he and his students studied. If these vegetables were sold for around $2/kg ? the value of produce would be around S$40 million a year – approximately U.S. $ 23.5 million a year.” (Wilson, 2005 – see below).