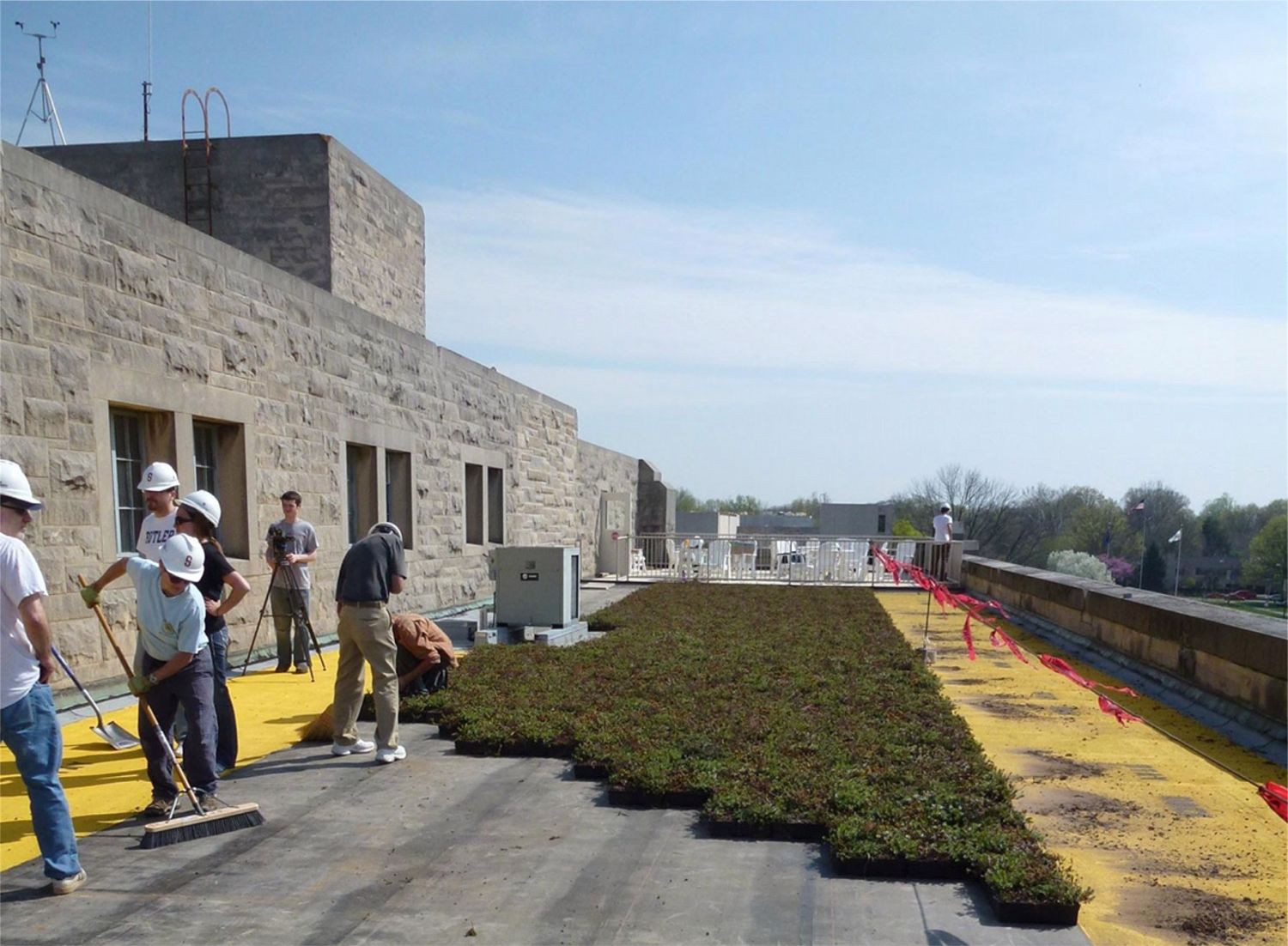 For additional information on the Butler University Pharmacy Building greenroof, contact Pat Maloney of Eco-Roofs llc at: Pmaloney@eco-roofs.com or 312-350.2806.

What was once a nondescript black roof on the Pharmacy Building is now the latest instance of Butler University’s campus turning green. About a dozen volunteers spent the morning and early afternoon of Thursday, March 22, 2012 turning a 1,300-square-foot section atop the building into an environmentally friendly green, or living, roof covered in growing plants.

The idea came from Sarah Strobl, a senior biology major from Rushville, Ind., who grew up loving nature and being outdoors. Last spring, she started looking into green roofs as part of her honors thesis, and that research led her to wonder whether a green roof was feasible at Butler.

By fall, she had secured about $25,000 from the Student Government Association to pay for the project and located a campus building with a roof that could withstand the additional weight. The University contracted Eco-Roofs, a company that specializes in green roofs. It brought in a crane to hoist 650 trays – each 2-square-feet and filled with soil and sedum ground cover – from the Pharmacy parking lot to the fourth-floor roof.

Volunteers laid the trays side by side over the roughly 90-foot-by-15-foot area, maneuvering around an air-conditioning unit. Campus engineer Rich Michal said the plant cover will prolong the life of the roof by protecting it from the sun. The cover also provides insulation for the building, which should lower heating and cooling costs.

In addition, the plants will improve local biodiversity, attracting bugs, birds and other life forms that can be studied by biology students. Strobl would like to do that, but she’ll be graduating in May. After graduation, she’ll be doing a six-month internship with Bayer CropScience in Germany, then perhaps go to graduate school.

But on March 22, 2012 she was savoring the sight of the Butler University Pharmacy Building project she helped complete. “It’s awesome,” she said, smiling. “I’m amazed how green it is already, and it’s going to brighten up with color.”

Eco-Roofs LLC provided 1300 sq ft of 1′ x 2′ x 3.3″ deep modular trays filled with 8 varieties of sedum for the Butler University Pharmacy Building green roof. The trays are delivered on rolling racks making installation efficient. All of the trays were installed in one and a half hours. A 20 ton crane was rented to lift the racks to the roof of the four story building.

Four members of the university staff were certified as Eco-Roofs installers by Pat Maloney from Eco-Roofs.