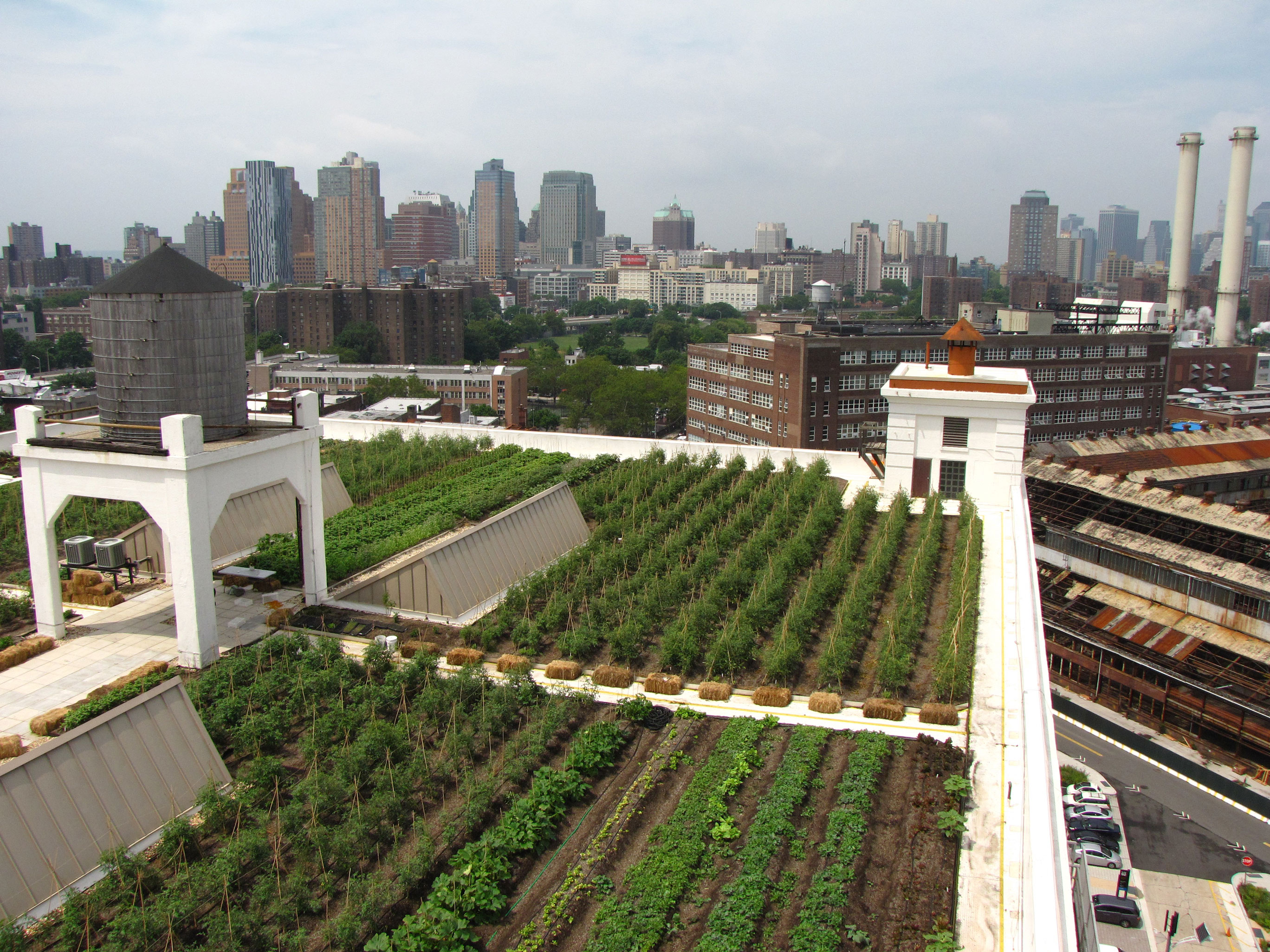 Available for purchase: “The Farm on the Roof: What Brooklyn Grange Taught Us About Entrepreneurship, Community, and Growing a Sustainable Business”, Avery, 2016, by Anastasia Cole Plakias, vice president and founding partner of Brooklyn Grange.

Learn about the following companies in the Greenroofs.com Directory: rooflite and Carlisle SynTec Systems.

Brooklyn Grange is a privately owned and operated enterprise whose operators include co-founders Ben Flanner, Anastasia Cole, and Gwen Schantz, as well as Partner Chase Emmons, who joined after the farm’s first season. Community oriented, they host weekly open houses in season, and, according to their website, feel the green space:

“…contributes to the overall health and quality of life of the community, bringing people together through green business and around good food… Our goal is to put more farms on roofs throughout New York and beyond, and grow more food, train and employ more farmers, and improve overall quality of life in the city.”

Brooklyn Grange’s second farm, located atop Building no. 3 at the historic Brooklyn Navy Yard, is “a massive 65,000 sq ft roof towering twelve stories over the East River. Installed in 2012, the farm is covered in 10-12″ of Rooflite Intensive Ag blend. The lion’s share of the financing for the installation of the Navy Yard farm was granted by the Department of Environmental Protection’s (DEP’s) Green Infrastructure Stormwater Management Initiative. We manage over one million gallons of stormwater each year, easing the burden on the overtaxed Red Hook Wastewater Pollution Control Plant, which services 32,000 acres of Northwest Brooklyn, and ultimately reduce the amount of waste water that overflows into our city’s open waterways. The Navy Yard is New York legend: ask any octogenarian in the area and they’ll tell you a story about a spouse or sibling who worked there way back when. At present, the Navy Yard continues to encompass several fully functional dry docks as well as several dozen of New York City’s most exciting businesses, artists and innovators,” (Brooklyn Grange website, 2016).

Brooklyn Grange’s second farm increased the business’ annual yield to 50,000 pounds of fresh produce between their two locations and created many new green jobs. The farm cultivates row crops such as leafy greens, aromatic herbs, heirloom tomatoes and peppers April-November, and sows cover crops, such as clover and oats in winter months to prevent soil erosion and replenish vital nutrients. Micgrogreens are grown in a greenhouse year round. The Brooklyn Navy Yard is also home to many of the 30+ hives comprising Brooklyn Grange’s Apiary.

Brooklyn Grange also hosts a robust events program here, with guests from around the world ascending to the roof for yoga sessions, cooking classes, natural dye workshops, dinners, weddings, and company off-sites. “The events program addresses the wide-ranging interests of NYC’s community, and engages New Yorkers and visitors from abroad in a variety of ways, whether they are die-hard homesteaders looking to add beekeeping to their skill set, or just want to enjoy a cocktail and some canapés overlooking the skyline at sunset. We believe as urban farmers it is our duty to meet our community where they live; speak their language, as it were, and find common ground on which to connect over issues of food and farming,” says co-founder Anastasia Cole Plakias.

Brooklyn Grange partners with numerous non-profit organizations and community organizations to extend the positive impact of the farm. They also have a Design and Installations department which has created gardens and farms across New York City, including the rooftop garden atop Vice Media’s headquarters in Williamsburg, Brooklyn.

The farm’s 12-inch deep growing beds are comprised of a special soil medium blended specifically for rooftop use. Custom designed by Brooklyn Grange and Skyland USA, rooflite® intensive ag was designed based on three years of in-depth laboratory and field research, and optimized for rooftop farming. Compliant with all the technical requirements of green roof media, rooflite’s IntensiveAg blend also takes into consideration the unique demands and requirements of agriculture.

The Brooklyn Navy Yard, Building No. 3 Rooftop Farm marked the launch of rooflite® intensive ag, a product specifically designed after the experiences in the field and the lab. With three years of in-depth laboratory and field research, in addition to input from various rooftop farming pioneers such as Ben Flanner of the Brooklyn Grange Farm, the rooflite technical team developed this optimized for rooftop farming product which complies with all the technical requirements of green roof media while at the same time taking into consideration the unique demands and requirements of farming. rooflite intensive ag contains a perfect balance of micro and macro nutrients, as well as the critical water-holding capacities that are a necessity for the production of fresh and healthy fruits, vegetables and herbs in an urban setting.

And the product development continues, as the new farm is also pioneering further enhancements to rooflite products by evaluating the benefits of Soil Reef® Biochar as an amendment to rooflite intensive ag. Prior to incorporating Soil Reef Biochar into rooflite intensive ag, a critical pre-conditioning process was carried out and the primed media incorporated on one half of the roof. Biochar is a highly porous charcoal which has the potential to increase yields and to promote sustainable and long-term soil fertility.

“Brooklyn Grange’s new rooftop farm is a win-win-win. We are reducing storm water runoff, creating local jobs and providing access to fresh produce for the community,” said Andrew Kimball, CEO and president of the Brooklyn Navy Yard Development Corporation. “I would like to thank Brooklyn Grange for bringing their creative vision to the Navy Yard and the Bloomberg Administration, through the Department of Environmental Protection, for providing the critical funding to facilitate this project.” ~ NYC.gov, 2012

“Spanning a sprawling 140,000 square feet, this location gives us room to stretch our legs and put to use the expertise we’ve accrued over ten seasons of building and operating rooftop farms. We have enough space to work and play at this site: from our 5,000 square foot greenhouse–home to our microgreens and hydroponic programs–to the 6,000 square foot indoor, climate controlled events hall and kitchen that will allow us to host events twelve months of the year, this farm will significantly grow our business. ” ~ Brooklyn Grange