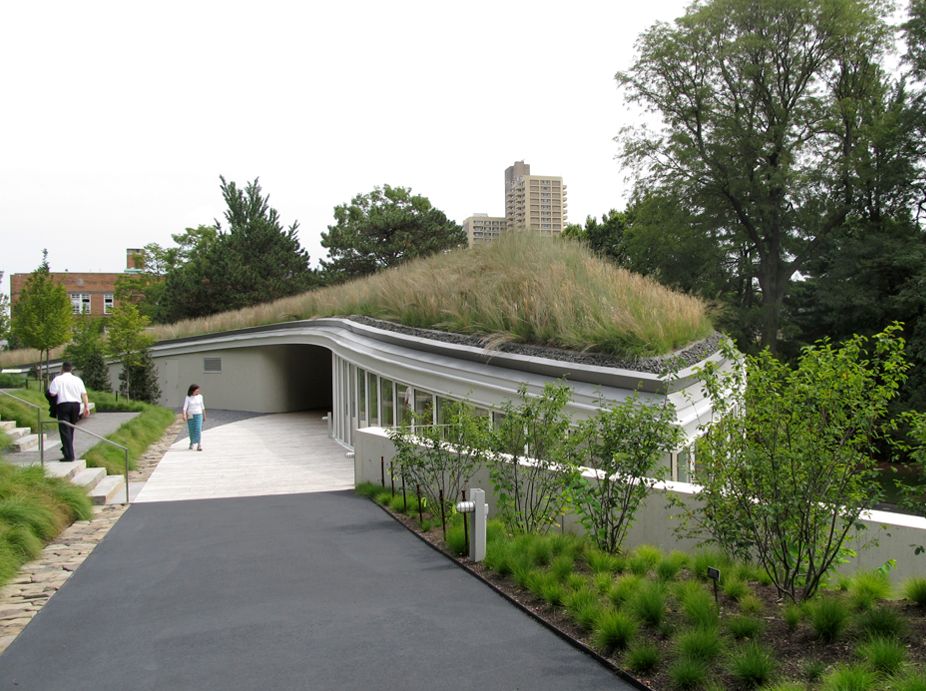 Founded in 1910 in the heart of Brooklyn on Flatbush Avenue, the Brooklyn Botanic Garden (BBG) was originally designed by the Olmsted Brothers landscape design firm, yet the present garden is largely the product of Harold Caparn, the landscape architect who took charge of the project in 1912. The BBG is an urban botanic garden that connects people to the world of plants, fostering delight and curiosity while inspiring an appreciation and sense of stewardship of the environment.

Embedded into an existing hillside in its northeast corner, the new multi award-winning Diane H. and Joseph S. Steinberg Visitor Center offers an exciting and innovative gateway to the 52-acre Brooklyn Botanic Garden. Seamlessly melding architecture and landscape, the BBG Visitor Center is a model of energy-efficient design, including earth-sheltered construction, a geoexchange system for heating and cooling of 28 geothermal wells, fritted-glass walls, and a striking undulating living roof. The Brooklyn Botanic Garden Visitor Center has dual roofs: pleated copper on top of the gift shop on the east side, which will eventually oxidize to a greenish patina, and the living roof on the west

“In the most significant garden renewal effort since the Garden’s founding 100 years ago, BBG is currently engaged in a dramatic and ambitious effort for the future. With projects that affect virtually every part of the Garden and extend beyond our borders, these enhancements will help the Garden meet the rapidly changing needs of our audience and our world, fostering a love and understanding of plants and the natural world and inspiring the next generation of environmental stewards.” ~ Brooklyn Botanic Garden’s Campaign for the Next Century New Visitor Center (now A Garden for the Next Century)

In response, BBG has created a dynamic plan for revitalization through the Campaign for the Next Century, whose priorities are:

Completed in November 2011, the 9,690 square foot leaf-shaped green roof atop the Brooklyn Botanic Garden’s new Visitor Center by architecture firm Weiss/Manfredi creates a dynamic and connective transition between the gateway building and BBG’s surrounding landscape. The slope of the roof is a prominent visual element of the site, and the semi-intensive green roof is planted with a richly textured variety of grasses, flowering perennials, and bulbs, including a number of native species.

“The new visitor center for New York City’s Brooklyn Botanic Garden is conceived as an inhabitable topography defining a threshold between the city and the garden. To provoke curiosity and interest in the world-class collection, the new building will provide a legible point of arrival and orientation, an interface between garden and city, culture and cultivation.” ~ Weiss/Manfredi

Roofmeadow designed the green roof profile, specifying its Type III assembly with 6.00 inches of media. The dual media Type III assembly utilizes a granular mineral drainage media layer beneath a lightweight, fine-grained growth media. A root-permeable separation fabric separates the media layers and keeps the growth media fines from mixing with the granular media. The permeable granular media base provides several advantages; it 1) absorbs moisture, 2) provides additional hospitable volume for root growth, and 3) moderates the rate at which water is discharged from the green roof. This assembly best approximates the natural conditions associated with shallow soil over shale bedrock.

Roofmeadow also designed the slope stabilization system – the undulating Visitor Center roof is pitched from 4 to 27 degrees. “The slope of the gable roof varies and includes a peak in the center giving the roof the appearance of an upside down ship. Slope stabilization is needed over roughly half of the roof area, including any area with a slope greater than 9 degrees. Stabilization of the media is achieved through the use of banana cleats secured to a geo grid net.

New York Green Roofs provided the installation as well as provides ongoing maintenance services. Roofmeadow and Sika Sarnafil (the waterproofing provider), are warranting the assembly for a period of 20 years. As a condition of the warranty New York Green Roofs is maintaining the roofscape in compliance with the Roofmeadow Maintenance Manual,” (Roofmeadow, see below).