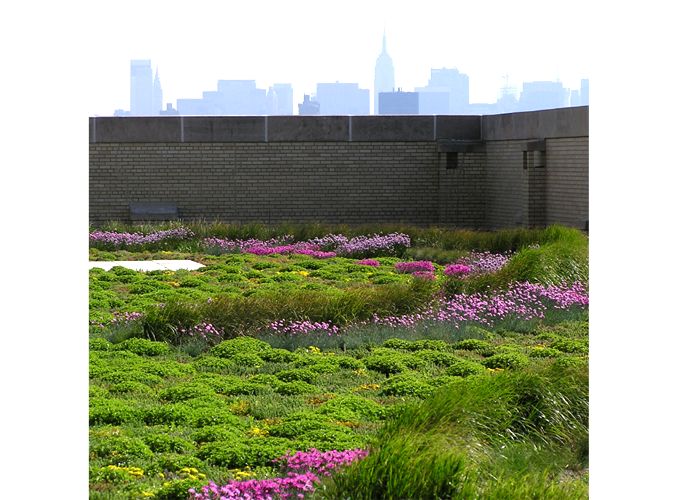 The Bronx County Courthouse opened its environmentally friendly green roof in mid September, 2006. The first of its kind in the Bronx, it is one of 14 greenroofs funded through the Bronx Initiative for Energy and the Environment of BOEDC, and the Borough President, Aldolfo Carri?n Jr. This is also the first green roof on a building managed by the New York City Department of Citywide Administrative Services (DCAS), which manages 53 public buildings in the City.

Kate Shackford, Director for Energy and the Environment, BOEDC, says, “It was an 18-month process getting permission and working out all of the licensing and administrative challenges in order to install the roof in June 2006,” (Personal Communications, 2007). Officials say the project will significantly reduce air conditioning and heating costs for the courthouse.

“I am extremely excited that my office was able to provide this green roof as a gift to New York City. The new roof will reduce air pollution and save energy; this will certainly make the rest of the city green with envy, and I hope that this project will inspire other buildings to follow our lead,” said Carri?n in a 2006 Press Release (see below).

Green Roof Service, the greenroof designers and consultants on the project, will conduct a two-year scientific monitoring of the roof to measure stormwater retention and temperature, and Magco, Inc., a division of Tecta America, will continue to monitor the green roof to maintain a healthy system.

“It’s a tremendous honor and opportunity to be involved in such a forward-thinking initiative as this, and we are delighted to be a part of this exciting green roof installation,” said Magco Inc. President Mark Gaulin, who is also President of the National Roofing Contractors Association (2006 Press Release).