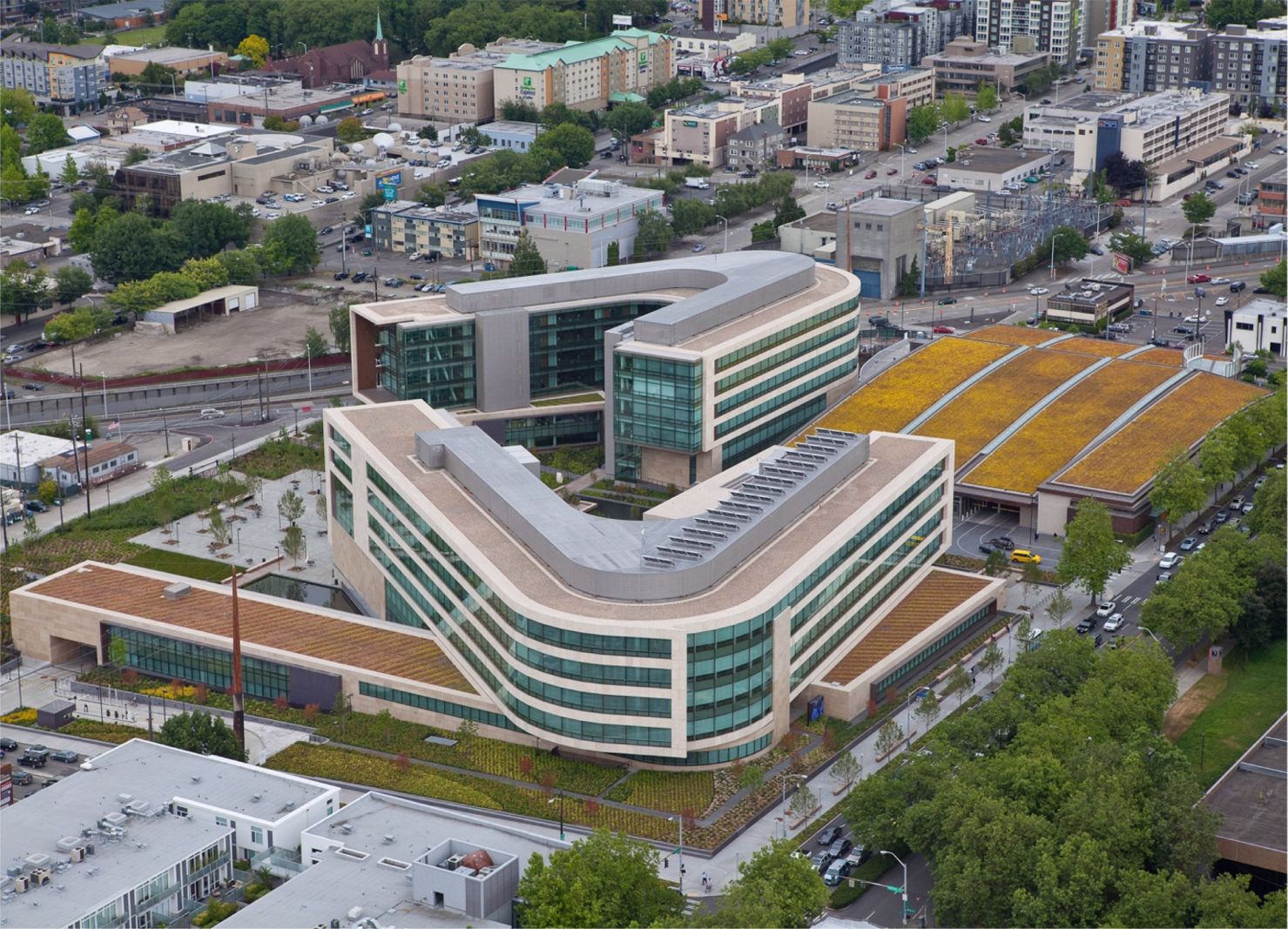 Visit the Bill & Melinda Gates Foundation website. There is free admission to the Visitor Center and onsite paid parking at the Seattle Center Fifth Avenue Garage.

October 2, 2014 In Seattle, a Humble, Mindful Campus by J. Michael Welton in Architects + Artisans; 2013 The Arup Journal, Issue 2 2013; June 4, 2012 Gathering Spot by KJ Fields in Architect Magazine; July 9, 2011 Shannon Nichol puts her mark on Gates Foundation Campus by Valerie Easton in The Seattle Times; August 25, 2010 Project of the Month: Putting ‘green’ and parking under one roof by Clair Enlow in the Seattle Daily Journal of Commerce; November 13, 2009 Bill and Melinda Gates grant $350 million toward foundation campus by Kristi Heim in The Seattle Times.

Completed in 2011, the multi-award winning Bill & Melinda Gates Foundation’s new 640,000-square-foot headquarters is comprised of two six-story boomerang-shaped buildings with a 1 million gallon underground rainwater storage capacity. Designed by NBBJ Architects, the campus is the largest LEED-NC Platinum Certified nonprofit building in the world. The new campus consolidated five offices and brought the foundation staff and partners together under one roof for the first time in ten years.

Located across the street from the Seattle Space Needle, the bases of the campus buildings align with the city street grid and anchor it strongly in the local community. The upper office wings, which are cantilevered above the base and rotate in different directions, extend 25 feet beyond the base structures. The campus features a total of two acres of extensive greenroofs, each with a five inch depth with plantings of sedum and sempervivum. Although the greenroofs are all inaccessible, most of the gardens located at ground level are publicly accessible.

“The garage is flooded with natural light at every level and intuitive to navigate. Lighting and way-finding are further eased with another feature: a five-story atrium-like pavilion that serves as the vertical circulation for pedestrians going to and from Fifth Avenue North and the center. It brings light and air from the roof deep into the underground floors of the garage. Inside the top level of parking, the high-vaulted roof is cut with a dramatic skylight.

“In a condominium-type arrangement, the center and foundation each own parts of the garage building. Through its wholly owned partner Iris Holdings, the Gates Foundation covered about 70 percent of the cost, and also participated in the project as a design client. Because of the center’s status as a public entity of the city of Seattle, the garage was subject to review by the Seattle Design Commission, with substantial input from surrounding neighborhoods,” (Seattle Daily Journal of Commerce, 2010).

A stylish palette of mostly natives along with non-native drought tolerant plants and ornamental grasses were designed by landscape architects Gustafson Guthrie Nichol (GGN). “We put in 125,000 plants, not counting the green roofs,” says Nichol in The Seattle Times, 2011.

GGN says, “To integrate the campus into the dense surrounding neighborhoods, landscape features – including pathways and water edges – are aligned to the street grid and adjacent buildings. An internal courtyard ‘floats’ on rainwater gardens planted with native reeds, and the campus is planted with native and edible plants, including blueberries and Big Leaf Maples. Rainwater is filtered by green roofs and directed from paved areas into a million-gallon cistern.”

Campus green spaces provide a variety of outdoor experiences around the campus heart. Many landscaped areas provide opportunities for individual and group activities. Boardwalks and bridges criss-cross the campus, providing routes that link the campus buildings together and encourage chance encounters. The tree-covered plaza floats lightly above a deeply grounded pool at the center, serving as the heart of the campus community. NBBJ says the campus’ landscape blurs the line between indoor and outdoor workspace and gives employees and guests a chance to enjoy the beauty of the Pacific Northwest.

The Gates Foundation’s conservation strategies reduce potable water use by 79 percent through landscape features; rainwater storage; and the living roofs. Energy consumption is reduced by 39 percent via a solar array made of 47 evacuated tube collectors which provides energy for about 36% of the domestic hot water use and reduces natural gas usage by 4,750 therms each year; smart lights; 750,000-gallon underground thermal energy tank which minimizes energy used to cool buildings by storing chilled water at night for recirculation during the day; and radiant heat (NBBJ).

NBBJ says this represents an upfront investment in the 100-year energy-efficient building that will pay for itself in fewer than 30 years. According to GGN, the campus is currently harvesting 3.3 million gallons of rainwater a year.

Pacific Earth Works provided and installed all the greenroof build up drainage layer components, edging, irrigation, pavers, growing media, cuttings (2,400,000) and plugs (120,000) for the Parking Garage. They also installed all of the at-grade landscaping complete.

The Bill & Melinda Gates Foundation offers the opportunity to dramatically improve the quality of life for billions of people and its campus is a paragon of sustainable design. In addition to regenerating the surrounding downtown Seattle community, their ecologically and workplace-sensitive campus design, including its 5th Avenue North Parking Garage and additional greenroofs, has created a new world model for sustainable urban campuses.