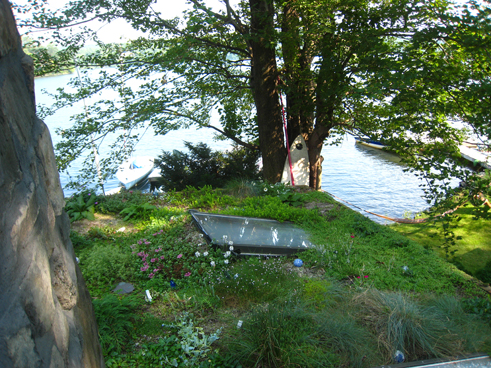 This was a DIY project on an existing flat roof over a sunroom. The existing structure had been built to sustain an 80 lbs/sq. ft. load and had an EP membrane in place, with easy existing access through sliding doors from a bedroom. Accordingly, the project required only appropriate drainage, root barriers and soil. The objective was improved aesthetics and to reduce runoff into the nearby lake.

We installed a protection layer of landscape fabric, Greentop 50RS drainage layer from Stevens Roofing Systems. The soil recipe was 40% perlite, 40% coir, 20% compost. The saturated weight is 34 lbs/cu. ft. The soil varies from 3″ to 6″ in depth. We stacked paver bricks two high on top of the drainage mat to form a 5″ stop at roof edge. Landscape fabric was draped up against the pavers. We planted a large variety of sedum, alpine plants and ajuga.

In late November, 2009 homeowner Russ Bennett sent us two additional photos from August 16, 2009, showing two views of the roof late in its second full season of growth. He added, “The roof’s performance has exceeded all our expectations. Aside from aesthetic appeal, it has reduced runoff to the
lake to a remarkable degree and eliminated an ice dam problem we had. Plant growth has been phenomenal without any watering or fertilizer (except at planting). Astonishingly, we have found that earthworms (which must have been introduced with the compost in our soil mix) have happily survived two winters! Our only problem has been maple seedlings from nearby trees.”