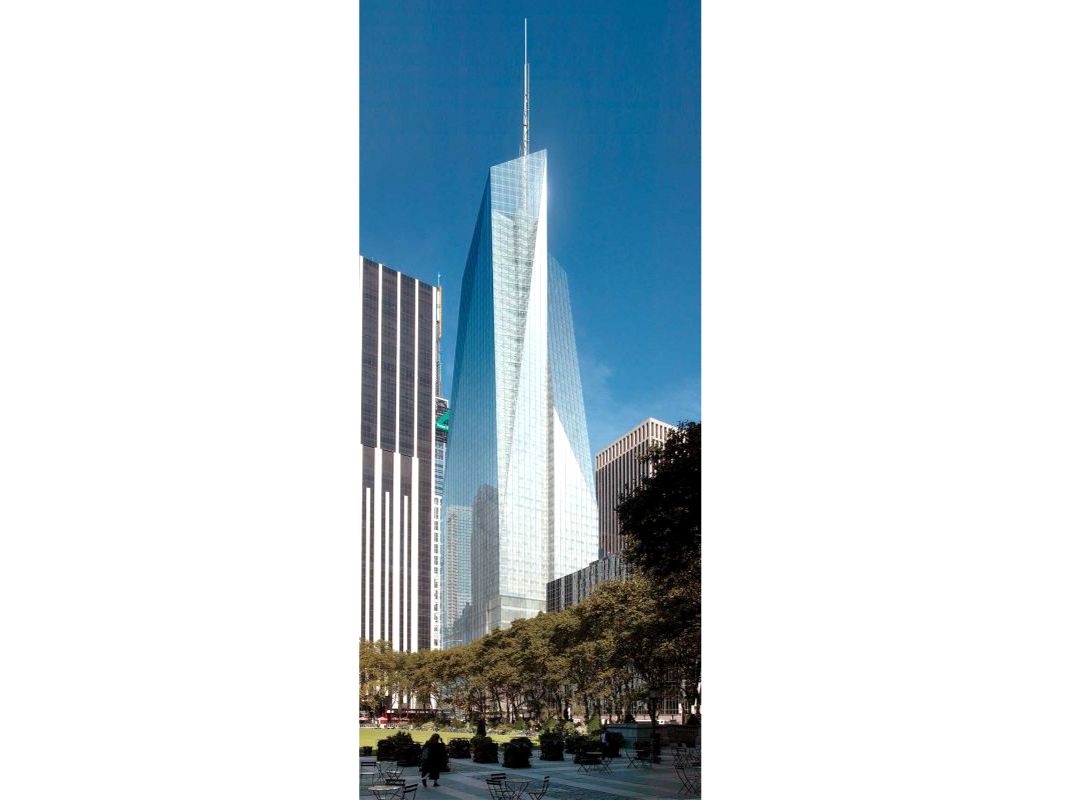 Groundbreaking began on the the Bank of America Tower at One Bryant Park on August 2, 2004, and in mid August, 2010 it became the world’s first commercial skyscraper to achieve the USGBC’s highest rating with the LEED Platinum certification.

In 2007 Skyscraper.org reported, “The Bank of America Tower at One Bryant Park will be the country’s greenest high-rise building, demonstrating the state of the art in energy efficiency, indoor air quality, sustainable materials, and environmentally-conscious construction, operations, and maintenance procedures. Designed by Cook+Fox Architects, LLP, the 55-story, 2.2 million sq. ft. tower is the first to strive for the Platinum LEED designation…

“The building will save 10.3 million gallons of water annually through such devices as waterless urinals and low-flow fixtures. A gray water system will capture, store, and re-use 100% of rainwater and recycle waste water and planted roofs, reducing the urban heat island effect. Bottom line, the Bank of America Tower will reduce energy consumption by 50%, potable water consumption by 50%, and create net zero carbon dioxide emissions.” The Bank of America Tower at One Bryant Park was named “Best Green Project of 2008” by New York Construction magazine.

Wikipedia says, “The tower will have an architectural spire that is 1,200 feet (366 m) tall. The building will be 55 stories high and will have approximately 2.2 million square feet (204,000 m?) of office space. Upon its scheduled completion, the tower will become the 2nd tallest building in New York City, after the Empire State Building.” The Durst Organization states that collaborators include: The Natural Resources Defense Council (NRDC), which has guided the project in the creation of a net zero-carbon dioxide building and the integration of a co-generation plant into the city infrastructure; The Rocky Mountain Institute (RMI), which led a charrette on reducing power consumption in the trading and data-center environments; The New York State Energy Resource Development Authority (NYSERDA), which helped sponsor the RMI charrette and will contribute almost $1 million for energy modeling, engineering and energy saving equipment; New York State, which through its Green Building Tax Credit, will potentially contribute almost $7 million for the project; and the United States Department of Energy (DOE), which is offering training in support of their latest energy modeling software, Energy Plus.

Cook+Fox Architects LLP says, “The green roof will be about 4,545 square feet, located on the ?podium? or 7-story base of the tower. It?s not all one area, but rather divided into patches on several different elevations (and) will be one of the last pieces to be completed, in 2009.” Also included in the design is some amount of indoor landscaping in the ?urban garden room,? a publicly-accessible indoor space on the corner of 6th Ave and 43rd St.