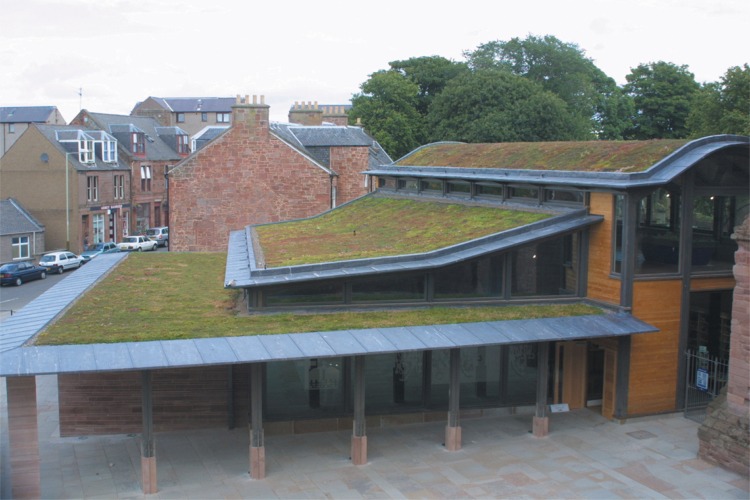 Arbroath Abbey is one of the most important historic buildings in Scotland. Founded by William the Lion in 1178 and dedicated to St. Thomas of Canterbury, this Tironensian Monastery is where Scottish Nobles signed the ?Declaration of Arbroath? in 1320 which asserted Scotland?s independence from England. Designed by Simpson & Brown, the new modern red stone and glass visitor centre offers many interpretative displays under its wave-shaped greenroof.

“The scheme included a new building with visitor facilities, retail area, audio-visual exhibition space and viewing gallery, together with external landscaping and new interpretation throughout the Abbey site,” Simpson & Brown website, see below.

A green roof was specified to lend sympathy to the surrounding abbey ruins. It was also imperative that the roof be lightweight, easy to install and have a minimum maintenance programme. Bauder Limited felt very privileged to be considered for such a prestigious project, and realised from the onset the implications of undertaking such a challenge. They knew that the final result would have to be particularly sympathetic to the surrounding abbey ruins. The Arbroath Abbey Visitor Centre received an award from the Dundee Architecture Institute, is the winner of the prestigious 2002 Angus Design Awards, and the recipient of the 2003 gold Green Tourism Business Award which recognises the positive steps that Historic Scotland has taken to reduce the centre?s environmental impact.

The perfect solution was the incorporation of the Bauder Extensive System, which comprises a complete waterproofing build-up on to which the green roof system is installed. The actual vegetation consists of several varieties of sedum that are grown to form a hardy living blanket which is rolled out on top of the roof, like turf. The system?s omission for the need of soil makes it very lightweight; ideal for scenarios where saturated loadings have to be kept to a minimum. Not only that, but it is also the only blanket of its type within the UK to achieve an FAA Fire Rating, something which on a project of this nature is of particular importance. The fire rating itself applies to the system as a whole.

Angus Council was delighted with the result of their new Visitor Reception Building and felt that their requirements had been met with the utmost proficiency. The result? ? There were four times as many visitors during a three month period, compared to the same three months of the previous year. For example, during August 2001, alone there were an extra 6656 visitors.