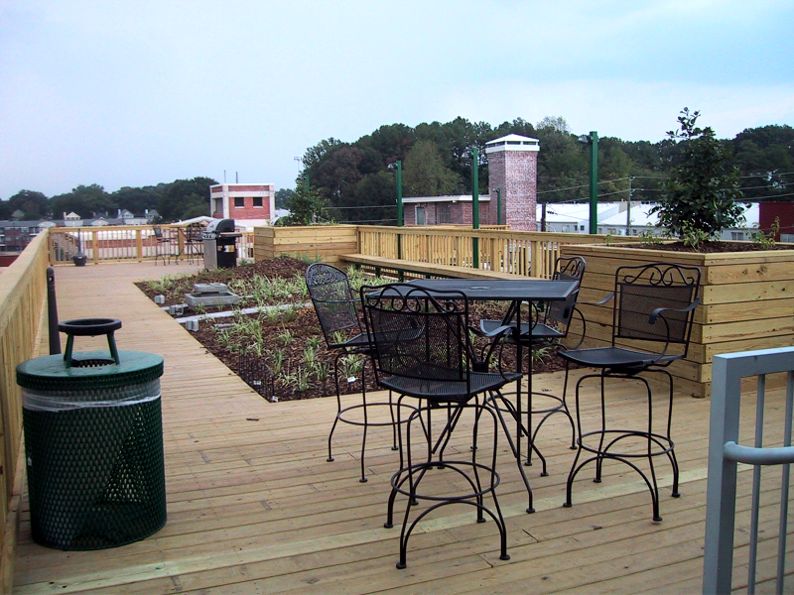 The A & P Lofts building, which is on the Georgia Register of Historic Places and has been voted and approved for local Landmark Designation, was constructed in 1930 by the Flagler Company for use by the Atlantic & Pacific Tea Company (A&P grocery). For the next 46 years, the building served as a base for A & P’s southeastern operations, as well as its regional bakery that operated until 1976, permeating the neighborhood with the smell of fresh baked bread. In 2001, Miller-Gallman purchased the building and converted it to loft apartments, and subsequently to loft condominiums. The red brick and concrete exterior with glass brick fill is a fine example of a pure modernistic building, typical for its time, the interior has mushroom columns that decrease in circumference with every floor. The roof is flat and a large rooftop observation and vegetated area has recently been added (2007) that provides an unobstructed view of the Atlanta skyline.The initial greenroof idea was the brainchild several years ago of Christopher Rampton, Skanska and Daniel Goers, Peter Drey & Associates. Both residents living in an apartment and in the building industry themselves saw the green space as a bonus for all residents to utilize. They wrote and designed a greenroof proposal, however with impending building ownership changes their proposal was temporarily shelved. Bill Gallman, Miller-Gallman Developers, renowned for their creation of unique and functional living environments within the confines of historic buildings, saw their idea as a contemporary use of space, hired an architect, John Moores, Pimsler Hoss Architects and made their initial vision a reality.

Due to structural limitations of the old building, architect John Moores tackled the weight limitations by designing a structural steel frame to raise the green roof 6? off the existing roof deck. Fluid applied waterproofing is applied to the inside of the steel frame. A layer of J-DRain 302 was installed on top of the waterproofing to allow water to freely drain to outlets and Dow insulation board was installed on top of the 302 to further reduce soil weights. J-DRain GRS, with water retention cups is installed on top of the insulation board and captures the rainwater for the plants to use as a resource. Water retention is critical, because the vegetated area has no formal irrigation. It will however be watered with supplemental hose watering during the initial establishment of root growth and during droughts. ItSaul Natural Rooftop Mix varies in depth from 8? ? 11?.Variegated Liriope is used as a grass-like substitute. Other plants include Ilex ?Emily Bruner? (one each in the large container/pots), Salvia Leucantha (Mexican Bush Sage), Hemerocallis ?Stella de Oro? (Daylily), Rubus Calycionoides (Creeping Raspberry), Lantana and Rosmarinus Officinalis (Rosemary) an herb that can be used for rooftop cookouts! Several of the units have a patio, and all residents have access to the rooftop garden with its sprawling view from Lenox Square to Stone Mountain to Centennial Park. The roof garden will provide shade and green space for residents to relax, as well as a water feature, and stainless steel grills.