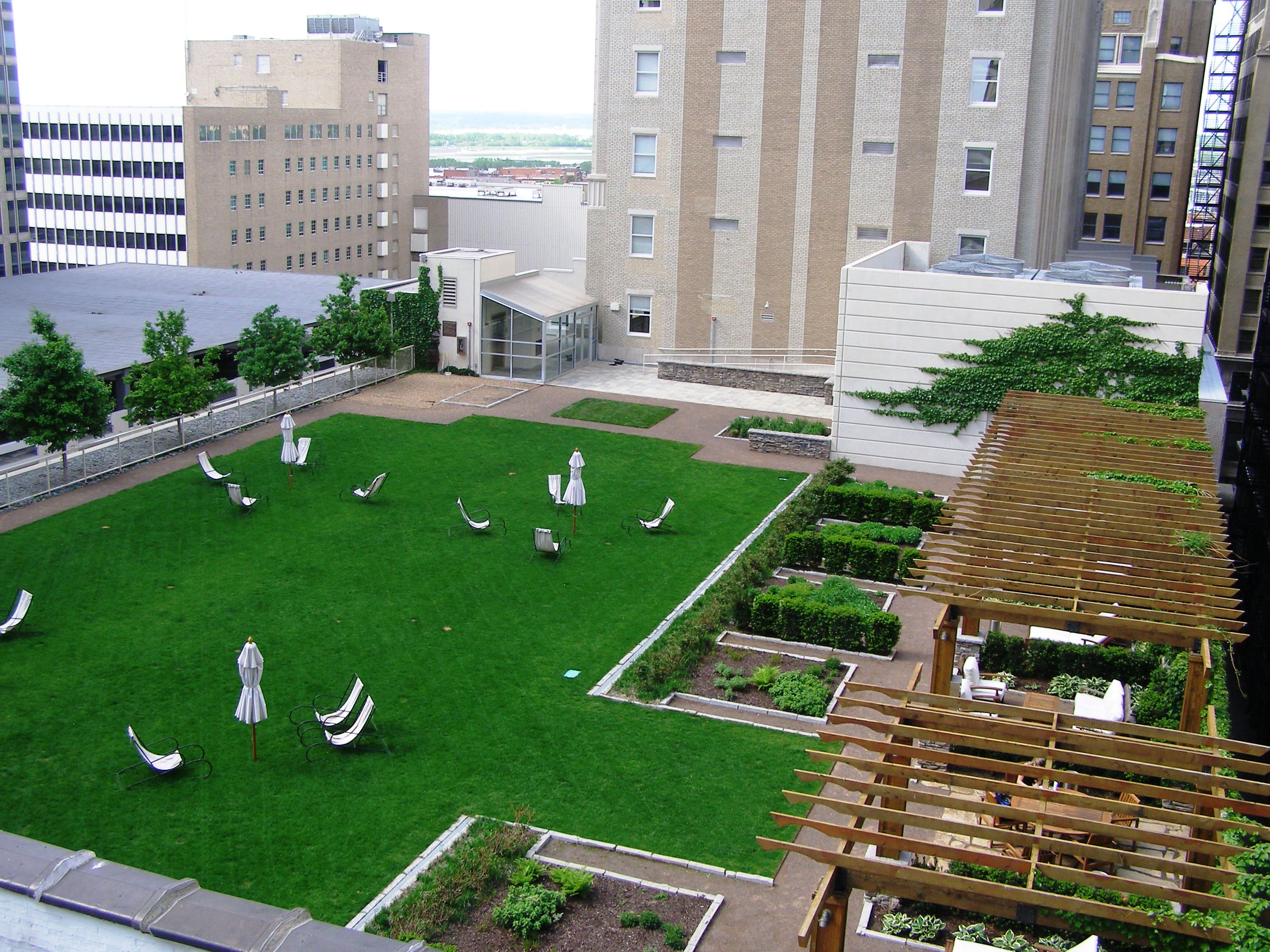 Learn about Soprema in The Greenroofs.com Directory.

Summer 2008 A Luxurious Rooftop in the Living Architecture Monitor.

Boasting twin-spires atop 35-stories, 909 Walnut is Missouri’s and the Midwest’s tallest residential building outside of Chicago. The multi-award winning 909 Walnut is on the National Register of Historic Places. The building was built in 1930-31 as the Fidelity National Bank & Trust Building (referred to locally as the Fidelity Building) that was liquidated in 1933 during the Great Depression. In 1946, the building was acquired by the United States federal government and renamed the Federal Office Building.

In 2000, 909 Walnut was acquired by Dallas-based Glenn Solomon of Simbol Commercial Inc., and Housing Horizons, LLC, a subsidiary of Kimberly-Clark Corporation, for a historic update and makeover that transformed the building to its original grand scale with 161 luxury condos, 90,000 square feet of commercial office space and with a 323-space attached, eight-story, gated garage. The top of the garage also includes a 16,000-square-foot, award-winning rooftop garden with cabanas, trees, sod lawn, and seasonal greenery. The original address of the building was 911 Walnut, but was changed to 909 shortly after the events of September 11.

“909 Walnut is the expression of a developer’s dream of turning an abandoned 36 story art-deco office building into the tallest mixed-use apartment building in the state of Missouri. The developer had a vision of providing a “green roof” atop an adjoining eight-story parking garage to serve the residents of the building in an area lacking green space. As prime consultant, Jeffrey L. Bruce & Company (JBC) provided design and construction administration services for the green roof on the eighth floor parking deck.

Envisioned as a secluded retreat for residents, JBC incorporated many green technologies to confront the inherent challenges of constructing green roof projects in the urban fabric. Special soil profiles, 6” for lawn area and 8” to 18” for landscape beds, were specifically designed to meet the diverse needs of this demanding site. The site’s extensive use required considerable agronomic innovation to ensure sustainability of the landscape under heavy daily use by residents and pets. The 909 Walnut green roof has become an icon of Kansas City, frequently seen on banquet invitations, professional model shoots, and educational sessions fueling an explosion of green roof construction in the region.” ~ Jeffrey L. Bruce & Company

909 Walnut has entered its second phase of life with an exclusive condominium conversion and beautiful recreational greenroof that has residents and Kansas City excited.

The three week project of waterproofing the roof, which included extensive flashing, began with the application of a Sopralene 180 base sheet and Sopralene GR 250 cap sheet. Then a flood test was performed for 48 hours to test the waterproofing for leaks.

“This garden captures 75% of annual rainfall for use by the plants-that’s a lot of help with stormwater permitting,” noted Mr. Bruce. “It was essential a superior waterproofing system was in place-with SOPREMA products, we’re able to offer the building owner a 20-year warranty while protecting the waterproofing from damage,” (Soprema).