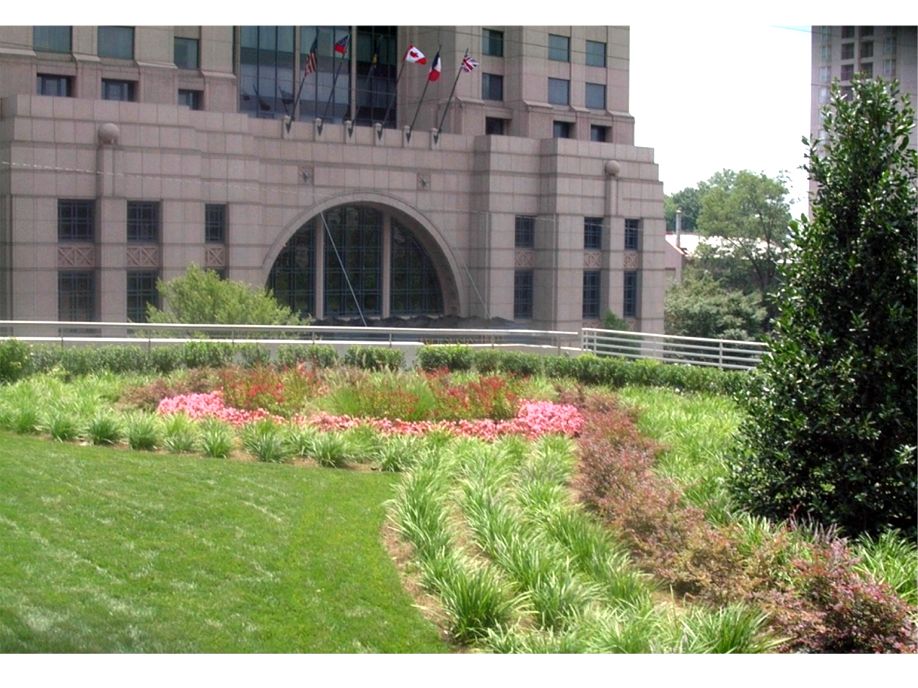 1180 Peachtree, also known as the Symphony Tower, is a 41-story skyscraper (24 floors of office in main tower, 3 podium floors on top of the parking deck, 12 levels of parking incorporated into the structure and a 2-level, 40-foot high lobby) located at 1180 Peachtree Street in the Midtown district of Atlanta, Georgia. Developed by Hines it was completed in February 2006

Rising to a height of approximately 657 feet (200 m), the building includes 670,000 rentable square feet of office and retail space in its 351,616 square meter of floor area as well as a 1,200 space parking deck. 1180 Peachtree was the first high-rise office building in the southeastern United States to be certified for Gold status in the Leadership in Energy and Environmental Design Core and Shell Development program (LEED-CS), which is sponsored by the U.S. Green Building Council (USGBC). 1180 Peachtree was also awarded the National Association of Industrial and Office Properties’ 2006 Green Development Award. This 41-story building is intended to be the campanile of the Woodruff Arts Center’s proposed Atlanta Symphony Center.

The plaza level, located at Peachtree Street level on one end and one level above street at the opposite end, is built over service and mechanical areas for the building as well as parking access. This plaza has an intensive garden on it as well as hardscape development relating to the lobby and providing pleasant pedestrian spaces for tenants and visitors. The tower steps back at the 18th level, where there is also a non-accessible greenroof. Early in the design process, the developer decided to pursue LEED certification. The plaza level landscape was a given for marketing and aesthetic reasons. The 18th level roof became an obvious target for LEED points related to reducing the heat island effect. The added benefit of visual enhancement of this roof increased its appeal. The building is the first high rise office building to achieve Silver LEED certification for core and shell. The property offers environmentally-sensitive and energy-efficient technologies and considerations including:

Ten-foot floor-to-ceiling glass to allow natural light to penetrate to the building core;Unique water-management system using captured and stored storm water and condensate from the building’s mechanical system to provide 100 percent of the project’s irrigation water, circumventing the need for city water for irrigation;Outside air delivered via the pre-conditioned air system is measured and controlled in air monitoring stations with changeable set points;Vegetated roof areas of at least 50 percent, and a shading veil on the 41st level roof;Mechanical systems that are capable of controlling humidity levels, which control mold and mildew.In 2009 the BOMA (Building Owners & Managers Association)-Atlanta awarded 1180 with its highest honor, the Earth Award, which recognizes excellence in environmentally sound office building management. The Office Building of the Year (TOBY) awards program recognizes building quality and management excellence.

1180 Peachtree has two intensive roofgardens; the plaza level garden, with over 27,000 s.f. of landscape and the 18th level, with approximately 8,000 s.f. Several lightweight engineered soil mixes, supplied by ItSaul Natural, are used based on horticultural requirements. The plaza level structure was built upside-down for clearance requirements below, creating a network of beams and joists with depressed areas (“troughs”). Minimum engineered soil coverage over beams is 12″ while the deepest soil is 42″. The troughs allow tree planting. Each has a slab penetration for drainage. They are interconnected for irrigation and overflow drainage.

The 18th level garden, not accessible to the public, provides a welcome sight from higher floors and adjacent buildings. Soil depth, at 15″-18″, is minimal for an intensive roof garden. Growing media is mounded to accommodate tree root balls. Plant material selections considered extreme temperatures and high winds. Trees include Crape myrtles for seasonal interest and ‘Evergreen Giant’ Arborvitae for year-round greenery. Trees are guyed to buried concrete curb stops, to maintain the integrity of the waterproofing. Lower plants include Needlepoint Holly, Creeping Raspberry, Rosemary, Liriope, Variegated Vinca Major, and Sargent’s Juniper. Irrigation is all drip. Tri Scapes, Inc. performed the following work on the roof top garden at 1180 Peachtree: light weight soil installation; installation of irrigation system; installation of 2500 plants and 35 large trees; maintenance of gardens and entire property, as well as installed hardscapes and the complete landscaping and irrigation system for the remainder of the project.