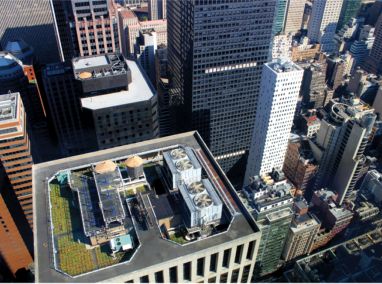 1133 Avenue of the Americas is located at 1133 6th Avenue, New York, NY 10036. See the profile from The Durst Organization. Read the December 2, 2013 Big Apple Green by Kelly Luckett at Greenroofs.com and the January 21, 2013 Compost Moves Up in NYC by Carmel Melouney in the Wall Street Journal. 1133 Avenue of the Americas was featured in the month of May in The 2014 Greenroofs & Walls of the World Calendar.

Learn about Green Roof Blocks in The Greenroof & Greenwall Directory.

”Leave this place better than you found it.” That was the simple philosophy of company founder Joseph Durst and his wife Rose. And since 1915 it has guided The Durst Organization’s commitment to sustainable building practices while amassing a portfolio of innovative buildings in which each new one is more environmentally advanced than the last,” (The Durst Organization, 2013).

Originally completed in 1970 by architect Emery Roth & Sons, the newly remodeled 1133 Avenue of the Americas totals 1,101,300 square feet of world-class commercial office space – plus two modular Green Paks greenroof systems from Green Roof Blocks now thrive 47 and 48 stories high in the air on Sixth Ave – officially Avenue of the Americas – in Manhattan, New York City, NY. The entire system has the capability to retain 27,897 gallons of storm water at a given time. Each Green Pak is a completely self contained module made of a long-lasting, unique knitted high density polyethylene.

Working for The Durst Organization on about 24 roof areas and setbacks on six of their high-rises in Midtown Manhattan – 25,310 square feet total – Kelly Luckett, President of Green Roof Blocks, said “The experience has been equivalent to working on a master’s degree in material handling. For example, this particular building’s freight elevator only went to the 45th floor. There were four flights of stairs leading up to the rooftop at the 47th floor. They had a trap door in the floor connecting the 45th and 47th floors. We set up a wench and lifted 1,100 Green Paks two at a time in a Rubber Maid trash can. The roof was covered with gravel that had to be bagged and taken down as we were bringing the Green Paks up so that we could swap out weight for weight. There were about 3,000 bags of gravel. We hauled the gravel up to McEnroe Farms to be reused,” (2013).

Green roof initiative: The Durst Organization has installed over an acre of greenroofs across its Midtown Manhattan portfolio on 9 of its 11 commercial properties. As part of special projects at Durst Organization, the real estate company teamed up with three students from the High School for Environmental Studies in Hell’s Kitchen to study the plants here at 1133 Avenue of the Americas and determine the benefits of greenroofs in high-rise settings such as Manhattan. To learn more, see the 1:58 video on vimeo created by students from the High School for Environmental Studies. Composting program: Food waste from the pantries and kitchens from the Durst buildings in New York City – 11 buildings totaling 13 million square feet – is taken upstate to Dutchess County to be turned into compost at the McEnroe Organic Farm in the Harlem Valley. The compost and soil is then brought back to the city to be used on the company’s greenroofs in Manhattan.