As you know, Design Editor Haven Kiers, MLA, LEED AP, GRP and I as Greenroofs.com publisher (and ASLA, LEED AP and GRP) annually compile our “Top 10 List of Hot Trends in Greenroof & Greenwall Design.” And I have the pleasure of inaugurating this year’s Top 10 Hot List in Sydney, Australia at the World Green Infrastructure Congress 2014 held on October 8 – 10, 2014.

Greenroofs.com is also proud to share the Top 10 List at the upcoming 12th Annual CitiesAlive Green Roof & Wall Conference in Nashville, Tennessee on November, 2014 where both Haven and I will be presenting.

Now in our 8th year of creating the Top 10 Hot Trends List, the potential and demand for greening of the ubiquitous 5th façade of a building continues to skyrocket across the design profession – in addition to covering walls with dripping vegetation. As usual in our quest for optical arousal, we’ll begin our fast and furious foray into the greenroof and greenwall world with spectacular Client Specific ‘Boutique Greenroofs & Walls’ – those projects which are just too unique to fit into a standardized grouping. This year we’ll be spotlighting New York City as a leader in industry construction and promotion, highlighting projects such as the Empire State Building, Via Verde, and the awesome High Line, among fabulous others.

Continuing our popular new category from 2013: “The Influence of Architects & Designers – Taking a Leadership Role in Design,” we’ll showcase the work of three outstanding international ground breaking leaders pushing the limits in our field. 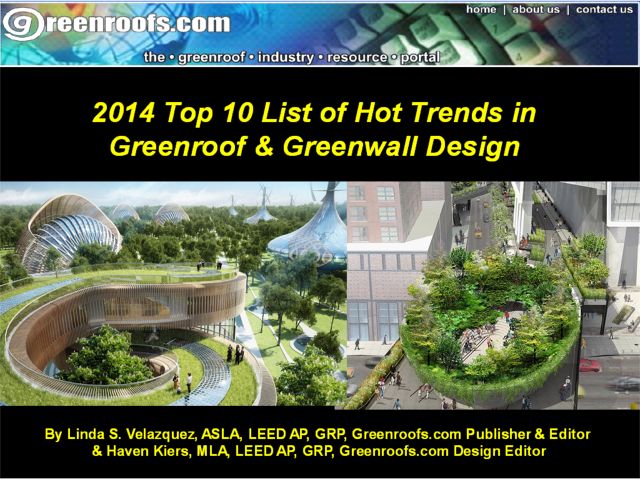 Designs in vogue on Greenroofs.com’s radar for 2014 include “Sculptural Architecture,” where the structure itself is a piece of art – such as the guitar-inspired Nashville Music City Center whose roof mimics the rolling hills of Tennessee, and “Greenroofs with an Edge,” where the laws of physics are pushed over the edge or to their limits – such as the Lincoln Center for the Performing Arts’ hyperbolic paraboloid-shaped greenroofed Hypar Pavilion.  We will celebrate the academics, including high tech offerings such as Pollution Reducing Skyscrapers to Generate Biofuel from a UK Master student and Bio Photovoltaic Panel greenwalls from a university in Spain which produce energy from bacteria in the growing media – as well as cultural progressives including King Abdulaziz Centre for World Culture in Saudi Arabia and the National Center for Civil and Human Rights in Atlanta.  We’ll be examining “Meditation Stations” – creating sustainable rooftop spaces for relaxing and socializing and “The Facebook Effect” – the influence of online and social media for marketing new projects which have jump-started such successful start-up ventures as Brooklyn Grange.

Finally, we’ll showcase “Vertical Garden Towers & Cities,” featuring spectacular towering concepts and projects in progress in the sky from around the world.

The Greenroofs.com Top 10 List of Hot Trends in Greenroof & Greenwall Design for 2014:

9) The Facebook Effect: The influence of Online & Social Media

8) Treatment Facilities Cleaning Up with Green

7) Greenroofs with an the Edge

Stay tuned for specifics regarding Greenroofs.com’s third Greenroofs & Walls of the World™ Virtual Summit 2015: Connecting the Planet + Living Architecture on April 6 through May 31, where you will learn from experts – including Haven and me – about what’s trending for 2015 and beyond.

Aramis and I are off to Sydney followed by Auckland in a couple of days, so we’ll be a little inactive for about three weeks!