As a green roof designer and advocate, I am constantly searching for examples of projects that highlight the aesthetic potential of green roofs and feature vegetation as the primary driver for the building design as a whole.  One of my greatest frustrations is the lack of imagination and creativity displayed in so many of today’s extensive green roof projects.  Yes, a simple sedum carpet will provide the environmental benefits that green roofs are known for, but what a wasted opportunity to create a living, dynamic, piece of art for the building and its occupants!

So it comes as somewhat of a surprise that my topic this month focuses on the camouflaging capacity of green roofs.  Why would I want to celebrate this particular ability when my main goal as a designer is to draw back the curtain on green roofs and fully integrate them into the common parlance of whole building design?  Because sometimes the building and its design are not the primary focus of a project.  Sometimes the site itself is the star attraction, and the buildings placed upon it need to blend into the background and assume a secondary role. 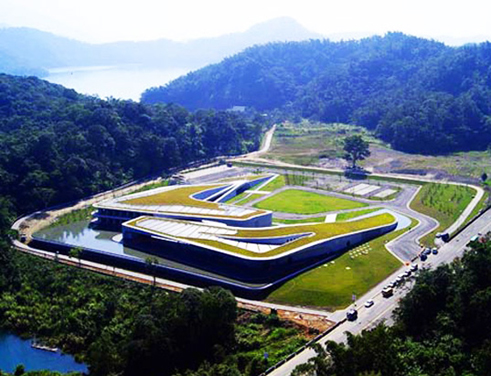 And this is where green roofs can turn an awkward interloper into an elegant native.  Here are some stunning examples of projects where the inclusion of a green roof transformed a building from an object in the landscape to an object of the landscape.

Frank Lloyd Wright’s Falling Water is an icon of modern architecture.  Nestled into the woods of Bear Run, PA, the house seamlessly blends with the streams and trees of the surrounding landscape.  When Fallingwater Institute announced a competition to create on-site accommodations for the Institute’s educational programs, Patkau Architects of Vancouver rose to the challenge and designed six houses submerged within the Bear Run Nature Reserve. 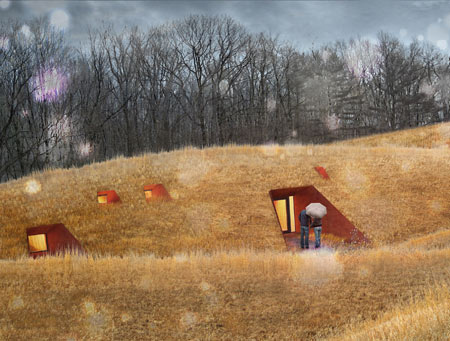 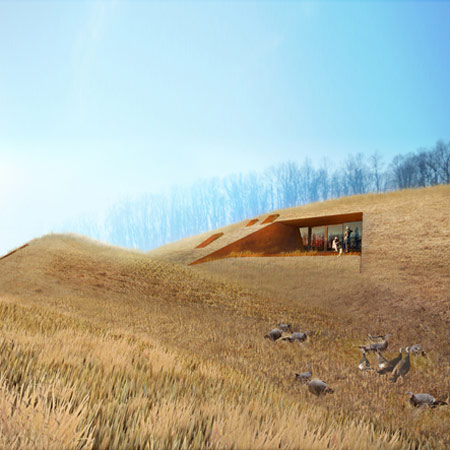 The houses rise and fall with the hills of the preserve, merging with the meadow prairie grasses.  Only a few simple doors and windows peek out from the hillside; the rest is covered with vegetation.   As stated by the jury, “We feel that the winning design by Patkau Architects will allow Fallingwater to grow by actively demonstrating the principles we espouse: good design in harmony with nature.” 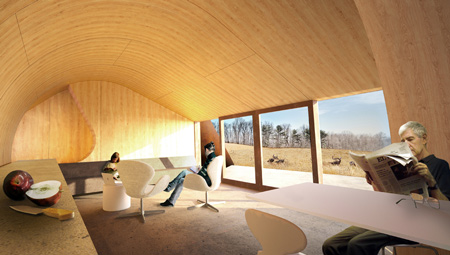 When clients learned that they could develop a mountain site adjacent to the famous thermal baths in Vals, Switzerland, they turned to the Dutch architecture firm, SeARCH.  The holiday residence peaks out of the alpine hillside, its main entrance an old Graubünder barn.  An underground tunnel leads to the focal point of the house, a large central patio carved out of the hillside, framing views of the Alps and allowing light to stream through to the underground rooms. 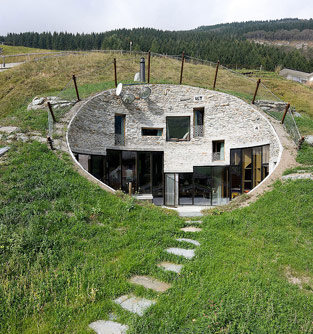 From the architect’s description of the site: “The local authority’s well intentioned caution, that unusual modern proposals were generally not favoured, proved unfounded. The planners were pleased that the proposal did not appear “˜residential’ or impose on the adjacent bath building. The scheme was not perceived as a typical structure but rather an example of pragmatic unobtrusive development in a sensitive location.” 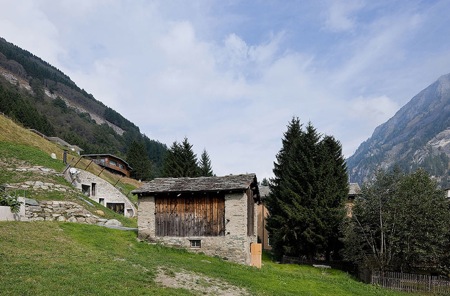 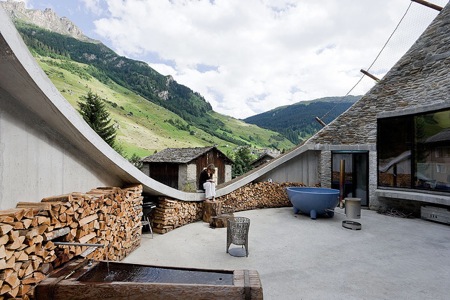 (Images by Iwan Baan via: Muuuz)

Ã–stberget is a hill in the center of the northern city of Ã–stersund, Sweden that provides magnificent views over the city and its adjoining Great Lake.  The hill has remained relatively undeveloped, despite several tourist-centric proposals to the contrary.  The design for an earth sheltered restaurant, an elevated walkway, wind-driven lights, and rest areas on the site arose from a discussion between architect Johan Berglund of London studio 42 Architects and FÃ¤rgfabriken Art Space, an art institution and gallery in Stockholm.

Their goal was to present Ã–stberget as more than a site for skiing and winter recreation; to create a modern identity for the hill and its town that included “the potential to create a place for all, without having to make big alterations to the natural environment.”  The result was an exhibition to spark debate and inspire enthusiasm about the future of the city of Ostersund.

Scottish architecture studio Groves-Raines Architects has raised the compost shed up from its low-brow roots in the far back corner of the garden and into the realm of high design.  Their elegant shedat Inverleith Terrace in Edinburgh  features a series of intertwining rebar that twists and bends towards a green roof enveloped by grasses.  Like woven willow baskets, the steel rods form organic walls and generate a pattern of dappled light that is continuously shifting.  Air and light entering through the gaps provides ventilation for the compost. 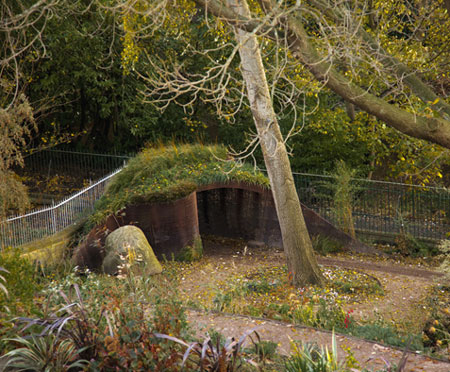 The green roof serves a dual purpose, first to remind visitors of the cyclical nature of composting (the grasses above are fed, no doubt, from the compost created below), and second, to link the shed to its surrounding wooded context. 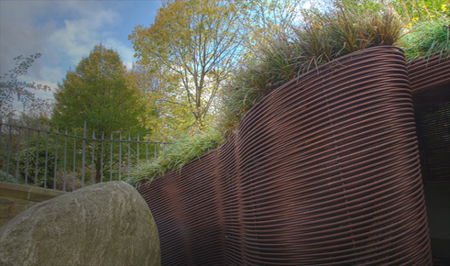 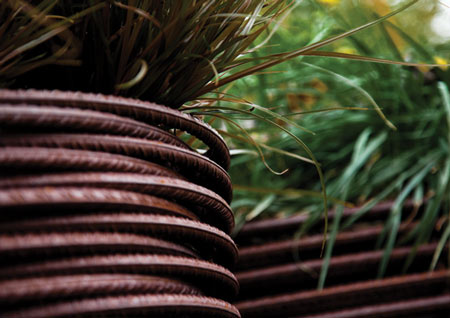 After looking at these projects, I’m happy to admit that there is a place for subtlety and camouflage within the green roof design cadre.

Features
Back to Nature ~ An Alternative Approach to Planting Green Roofs 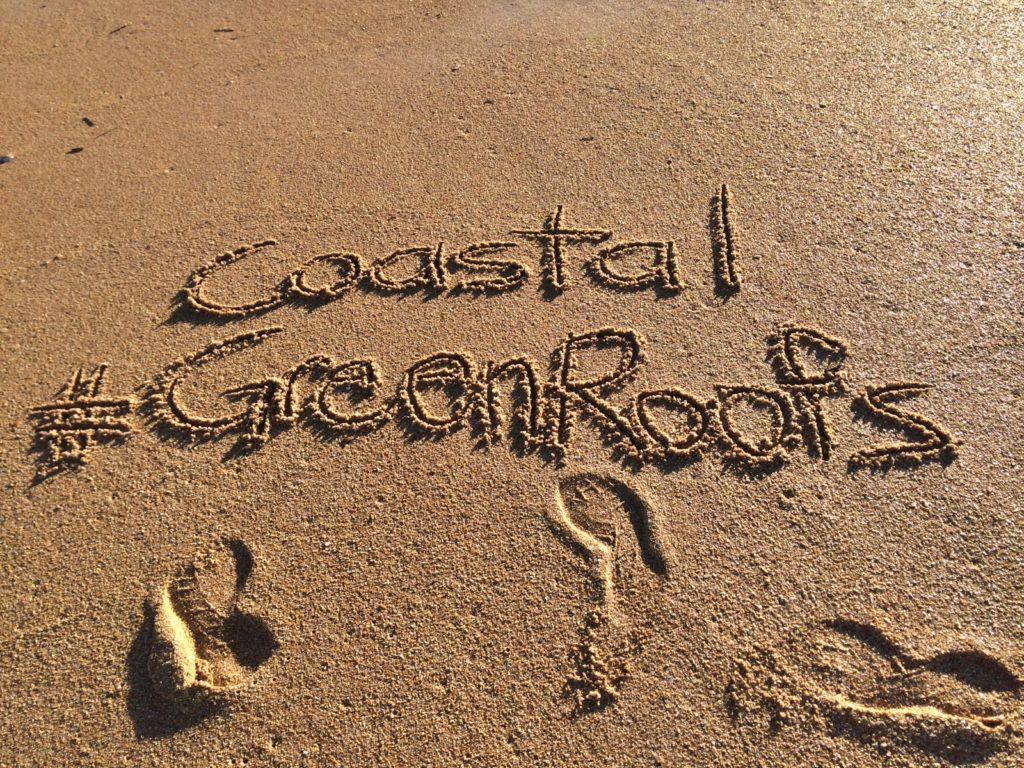 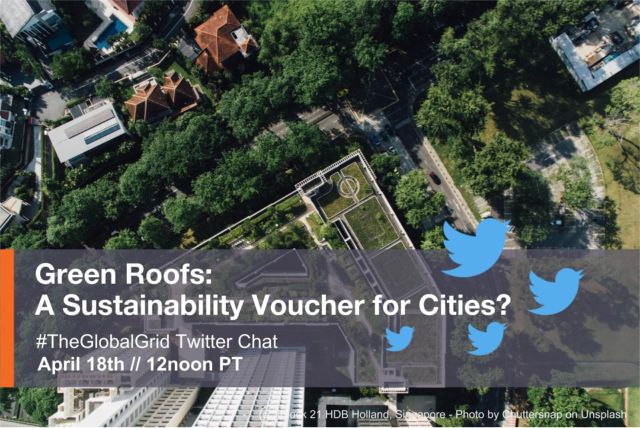