As I told you about last week when I introduced the “Greenroofs & Walls for Educational & Social Equity in the Bronx” video from our inaugural  Greenroofs & Walls of the World™ Virtual Summit featuring New York State Senator Gustavo Rivera, Bronx Borough President Ruben Diaz Jr., Robert Bieder, Jon Beuttler, Jess Dannhauser, Javier Lopez and Steve Ritz, Steve has the honor of speaking tomorrow at TEDxManhattan “Changing the Way We Eat”  at the Times Center in New York City.

I’m sure you’re all aware of the awesome speakers highlighted at the inspirational organization, TED!

TEDx is an independently organized event and licensed by TED.  The TED Conference provides general guidance for  the TEDx program, but individual TEDx events are self-organized:

In February of 2011, over 14,000 computers tuned in from locations all over the globe to watch the live simulcast of the first TEDxManhattan “Changing the Way We Eat.” Tomorrow, Saturday, January 21, 2012, the second TEDxManhattan “Changing the Way We Eat” will explore the issues, the impacts and the innovations happening as we shift to a more sustainable way of eating and farming and help to create connections and unite different areas of the food movement.

The cool thing about this is that although it is a live, local event held in Manhattan, anyone with access to a computer can watch the webcast live at www.livestream.com/tedx from 10:30am – 5:15pm EST tomorrow, Saturday January 21st.

There’s a world-class line-up of speakers that is sure to inspire you (for a complete list, see here),  including:

Bronx teacher and administrator Stephen Ritz will be presenting the 245 slide BRONX based presentation entitled:  “Green Bronx Machine:  Growing Our Way Into A New Economy will focus on NYC DOE school children and THE GLORY AND BOUNTY OF BRONX COUNTY!!!”

This award winning program was recently cited in the December 2011 Issue of Principal Leadership: National Association of Secondary School Principals as one of five national exemplars of service learning, and continues to move the most disenfranchised and marginalized students from the poorest Congressional District in America into living wage career opportunities while harvesting minds and cultivating hope across the Bronx and NYC.

Once again, read about some of Steve’s outstanding work in our Sky Gardens blog post of January, 2011 by Caroline Menetre.

This sounds like a great opportunity for people around the world to connect online with each other (sounds like the mission of our  Greenroofs & Walls of the World™ Virtual Summit!) about the sustainable food movement, which we know of course includes the amazing applications for growing food on rooftops and walls!  While the talks revolve around the speakers in NYC,  I’m sure we’ll all take away a great deal of information that we can apply to our own communities.

Happy greening in NYC and around the world! 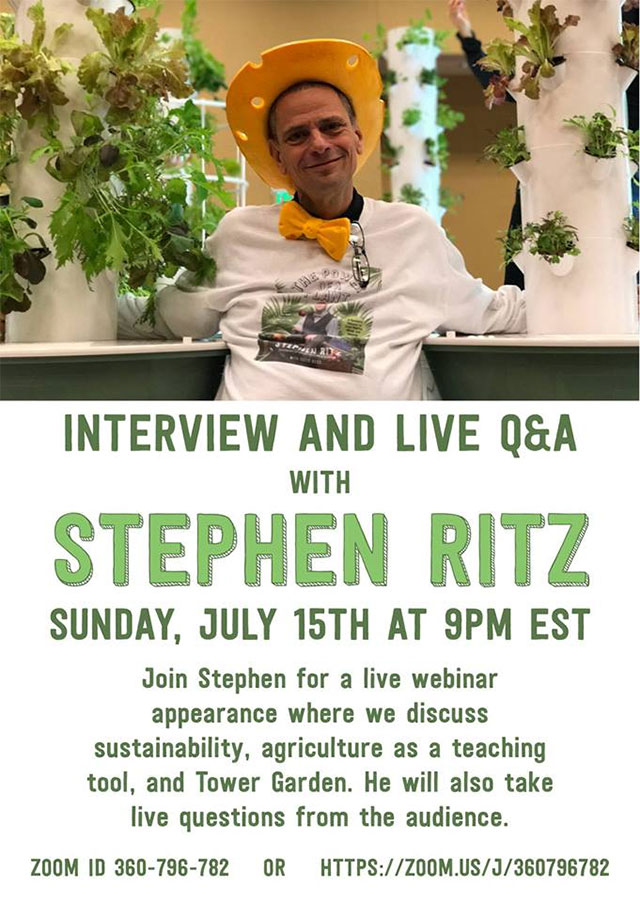