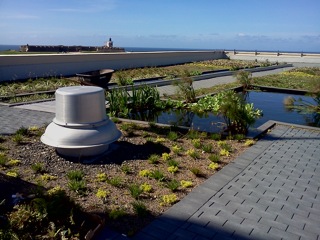 El Cuartel de Ballajá was constructed by the Spanish army between 1854 and 1864. The structure is one of the most impressive constructed by Spain in the New World and it stands as the last example of monumental military architecture by the Spanish Monarchy in the Americas. Today, the Ballajá Barracks houses several educational and cultural organizations, namely the Museo de Las Américas.

Designed by the architect Edmundo Colon with the help of GRP David Aponte, the green roof was part of several “green intervention” projects done to the Cuartel de Ballajá, including a 151.2 KW PV system with 720 solar panels. The project was built using a 60 mil PVC waterproofing system (Durolast), a 16 oz. protective mat, 2″ of rooflite drain w/ drain channels, filter fabric, 4″ average of rooflite growing medium and 60,000 plants that vary from plugs to 6″ pots. The green roof also has greenwalls and an artificial wetland to manage higher roof storm water amounts, which is used on a needed basis as the supplemental irrigation system.

The  Cuartel de Ballajá is situated  on the northwestern-most point of the islet of San Juan, Puerto Rico in view of El Morro (1539), or the Fort San Felipe del Morro, also known as the Morro Castle.  In 1961, the United States Army officially retired from El Morro and the fort became a part of the National Park Service to be preserved as museums.  In 1983,  El Morro  and the city walls were declared a World Heritage Site by the United Nations.  The photo above by Kamran Saraf shows “a panoramic view of Old San Juan, Puerto Rico from atop Fort San Felipe del Morro.”

Located in the Old San Juan area on a lot of approximately three acres, the  Cuartel de Ballajá  lies between Morovis, Beneficencia and Norzagaray streets, and occupies six city blocks of the Ballaja community (Barrio Ballaja) that were expropriated and demolished in 1853.

“In 1976 the government of Puerto Rico acquired the Ballajá Infantry Barracks Building (Antiguo Cuartel de Ballajá) from the federal government of the United States of America by way of a transfer with a commitment to restore and use the building for cultural, educational and touristic purposes.

In 1986 the restoration of The Barracks began under the “Plan de Reforma Interior de la Zona Histórica de San Juan” (San Juan Interior Historic Zone Restoration Plan). The restoration work was realized from 1990 to 1993. Previously , in 1992 “El Museo de las Américas” (Museum of the Americas, second floor), was founded, with various exhibitions pertaining to the cultural history of Puerto Rico and the Americas. ” ~ Ballaja.com

The greenroof is just one of the numerous renovation projects here with sustainability in mind.  Due to the building’s age and historical status,  MFS Consulting Engineers provided the Oficina Estatal de Conservación Histórica with a structural analysis and structural investigation of the rooftop of the Cuartel de Ballajá for the proposed construction of the  wetland  greenroof.

With its large solar array, the Cuartel de Ballajá was included this year in the Puerto Rico Solar Tour 2011:

David Aponte of PR Design Group says the idea of introducing the wetland and greenwall on the roof came from the design/construction team (General Contractor, Green Roof Contractor and Architect), and the client agreed.  The  greenwall measures  6 x 80.  It’s a custom design, following the Patrick Blanc hydroponic greenwall technique of a soil-less system.  The wall has an internal dripline that is supplied with water from the wetland. 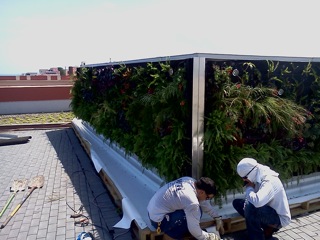 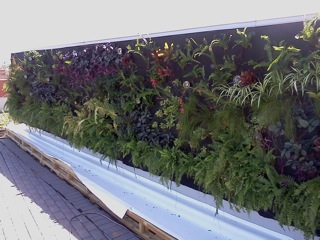 If you’re in San Juan, you must visit the historic El Morro, one of Puerto Rico’s most popular tourist attractions.  Then it’s a quick stop over to visit the beautiful  Cuartel de Ballajá and its wetland rooftop garden with greenwalls.

Did we miss something?  We’d love to hear from you!  Click  here to see more information about this project in The International Greenroof & Greenwall Projects Database.  See how you can submit yours here.