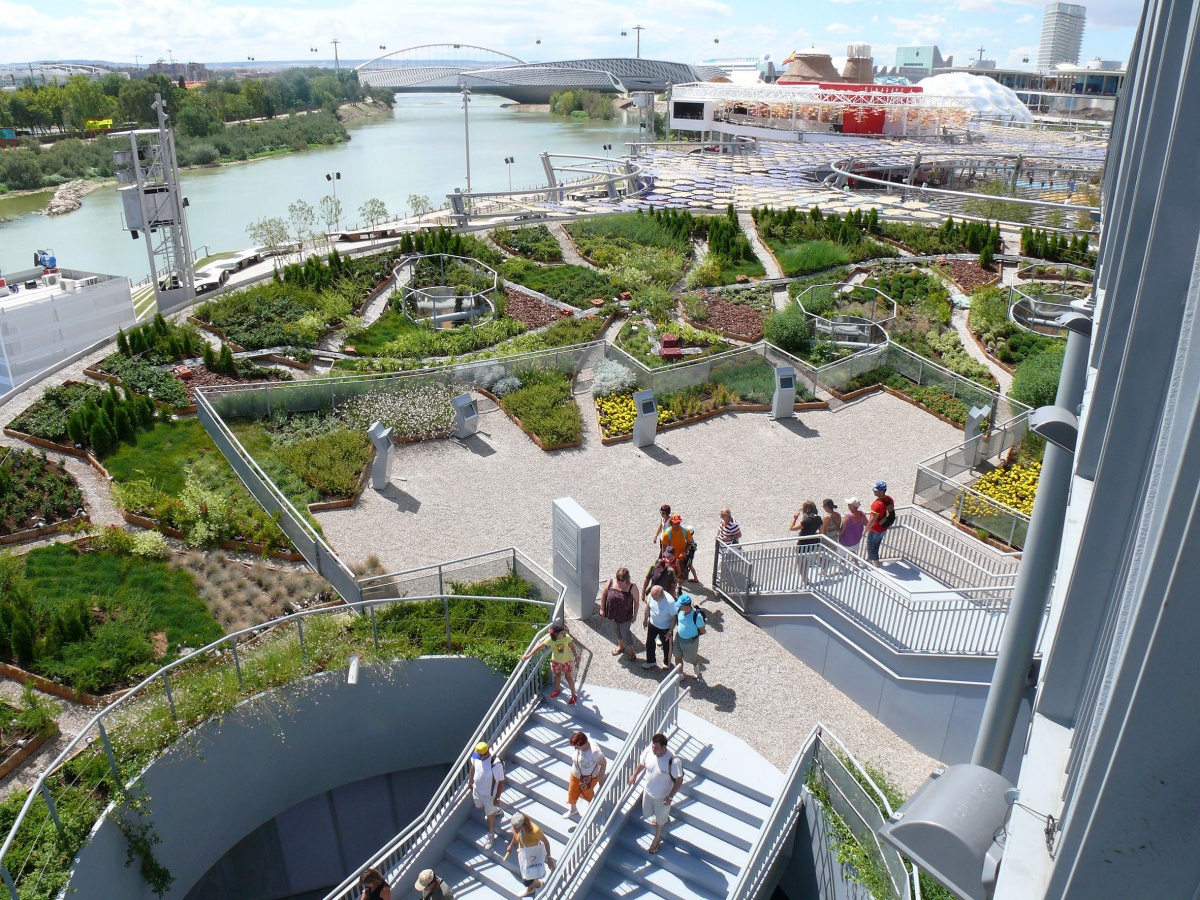 The theme of the World Expo Zaragoza 2008 was “Water and Sustainable Development” and architects and designers from around the world were called to build forward-thinking structures for the 57-acre site. Massive greenroof areas covering the 765,000 square feet of the elevated structures also included photovoltaics.

Only 11.172 sq meters out of the total surface were viable for pedestrian use due to structural requirements and building time restrictions, so a ZinCo system with a 25 cm thick light substrate growing medium was used. The 754,000 sf “Pabellones de las Naciones,” or Pavilions of the Nations, displays various types of water distribution found in nature as you meander through lush landscaped areas of pathways, seating areas and a constructed river. The 11,000 sf roof of “Aguas Compartidas,” or Shared Water Pavilion No. 6, has varying slopes up to 18 degrees. Its design intent was to show the potential for fair distribution of water across the region; rainwater was collected and used for irrigation of the beautiful perennial gardens.

Located on the banks of the Ebro River, careful site design and sensitive construction practices were essential to maintaining its essential physical, social and environmental characteristics .

In reference to selecting an appropriate greenroof system to cover the huge expanse, and do so beautifully and well, Carlos Avila Calzada, Head of the Landscape Department for the Expo Zaragoza 2008 said:

“Regarding the green roof structure it was decided to choose a ZinCo system with a 25 cm thick topsoil layer, formed by a light substrate. When designing the green roof we set three main objectives: choosing a design that would provide a global idea of all the pavilions’ roofs, creating a green structure which would show a vivid contrast between a neutral background and large colourful areas and incorporating the photovoltaic panels in the design. The walking area has different characteristics as there are wooden paths and spaces for the visitors to sit down and enjoy the view over the exhibition site or the rest of the city. These areas, equipped with furniture and lighting, resemble those of public use in cities more than a green roof.”

105 countries were represented here with an extensive cultural program. Concentrated on the future of water, the event ran for 93 day and experienced long waits for many of the pavilions, but despite that visitor numbers were lower than forecast at 5.5 million instead of 6.5 million.

King Juan Carlos and Queen Sofia attended the closing ceremony, and according to TypicallySpanish.com, the King said such events “encouraged us to take on new projects together, and served to unite and build an always better Spain.” Spain commissioned a special stamp commemorating the Expo:

Once concluded on September 14, 2008, the World Expo Zaragoza 2008 was redeveloped and revitalized by new owners  Expo Zaragoza Empresarial and renamed Zentro Expo Zaragoza – the new activity, entertainment, and economic center for the city – and opened again to the public on January 20, 2011.

Dismantling of the pavilions and thematic spaces resulted in the creation of the state-owned (Government of Aragon) Ebro River park. The mission states that they are “socially and environmentally committed to the future challenges of Zaragoza.”

“El meandro de Ranillas” is the largest open area with natural greenspace for the people of Zaragoza  and its surroundings. More than 120 acres of recreated nature and outdoor activities now include the Water Park – 120 acres of nature and outdoor activities with a whitewater channel and the first artificial beaches in Spain – and a variety of commercial and service facilities. The “Ranillas Meander” is a space that attracts audiences of all ages and is very family oriented.

This complex of over 77,000 m2 of offices creates a unique environment of office space called Dinamiza (Boost) Business Park. And Fluvia is an exclusive enclave of only 18 commercial stores offered here with more than 19,000 m2 of space. An estimated 1,500 visitors each day are offered a wide variety of entertainment options including cinemas, shops, a gym, over 15 restaurants, bars and cafes with outdoor terraces – all overlooking the river Ebro.

Also present on site of the former  World Expo Zaragoza 2008 is the new Institute of Climate Change which intends to be a unique platform for the meeting of the Spanish scientific community and international participants to implement innovative and cutting edge research on a global level, making Zaragoza a role model for their commitment to the environment:

To all accounts, the greenroofs have fared well and will, no doubt, continue to provide a lovely cooling respite to inhabitants of Zaragoza and international visitors alike.

Did we miss something? We’d love to hear from you! Click here to see more information about this project in  The International Greenroof & Greenwall Projects Database. See how you can submit yours here. 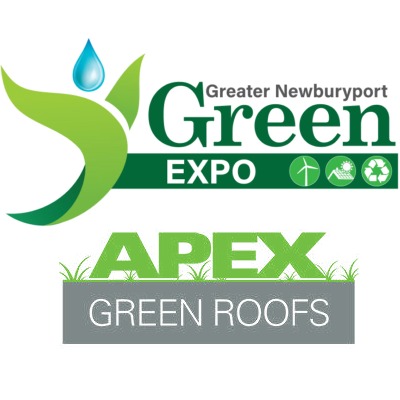 Press Releases
Apex Green Roofs is exhibiting at the Green Expo in Newburyport, MA on April 11