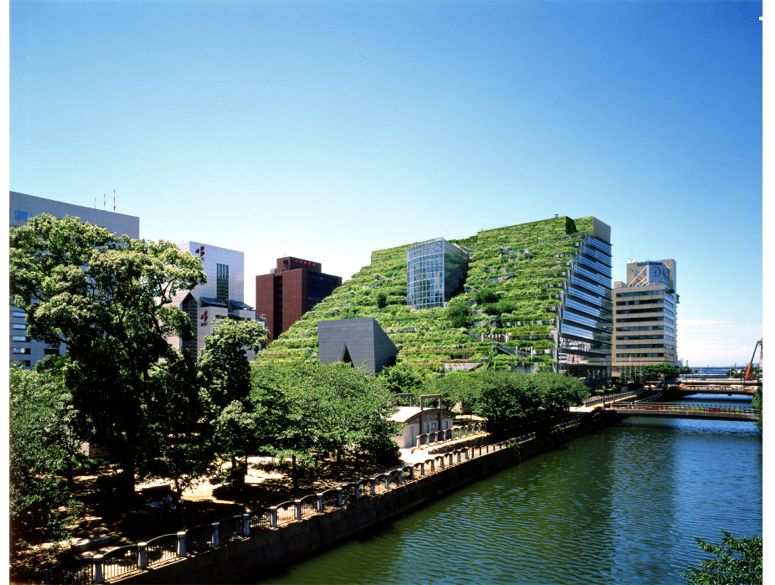 Architect Emilio Ambasz transposed a 100,000-square-meter park in the city center onto 15 stepped terraces of the ACROS, “Asian Crossroads Over the Sea,” Fukuoka Prefectural International Hall. The design for ACROS Fukuoka proposes a powerful new solution for a common urban problem: reconciling a developer’s desire for profitable use of a site with the public’s need for open green space. The plan for Fukuoka fulfills both needs in one structure by creating an innovative agro-urban model.

Its north face presents an elegant urban facade with a formal entrance appropriate to a building on the most prestigious street in Fukuoka’s financial district. The south side of the Hall extends an existing park through its series of terraced gardens that climb the full height of the building. Along the edge of the park, the building steps up, floor-by-floor, in a stratification of low, landscaped terraces. Each terrace floor contains an array of gardens for meditation, relaxation, and escape from the congestion of the city, while the top terrace becomes a grand belvedere, providing an incomparable view of the bay of Fukuoka and the surrounding mountains. Growing media depths range between 12″ and 24″.

The city-owned site was the last large undeveloped plot in central Fukuoka. The city chose to develop the site in joint venture with private enterprise and the plan was for a commercial developer to lease the land for sixty years and construct the building. A portion of the building’s space would be devoted to public and municipal operations including a symphony hall; the remaining allowable space would be revenue-producing with various offices, shops and commercial enterprises.

At the same time, the competing developers sought to maximize income potential of the large land mass. Yet the architect was concerned about the effect of the development on adjacent 100 meters by 250 meters Tenjin Central Park, the only green open-space left in that part of the city. To the maximum extent possible, the architect wanted to give back to Fukuoka’s citizens all the land the building would subtract from the city.

The Google Aerial view below really puts the massive scale of the greening project into perspective:

Architect Emilio Ambasz “was awarded this commission for successfully achieving reconciliation between these two opposing desires: doubling the size of the park while providing the city of Fukuoka with a powerful symbolic structure at its center,” (Architecture News Plus).  Below is the more formal, glass-fronted street-facing facade directed at the financial district area:

Emilio Ambasz, a highly accoladed early pioneer in the field of green architecture, achieved this by planting vegetation on the all the stepped planes, in effect mitigating the negative effect of the building footprint completely. By replacing 100% of the land that the building displaced with vegetation, ACROS is organically integrated into the site – an example of Ambasz’s “Green Over the Grey” philosophy.

“I see my task as an architect as that of reconciling our man-made Nature with the organic one we have been given.” ~ Emilio Ambasz

I had the pleasure of meeting the indomitable (and sarcastically witty) Emilio in Singapore last November, and in his keynote address at the Skyrise Greenery Conference he explained that he has never set out to design a greenwall on a structure – they are all simply greenroofs, planted horizontally with cascading vegetation covering the vertical surfaces. To learn a little more about him, read “The Elusive Mr. Ambasz,” a great interview of Emilio in Architect Magazine by Vernon Mays of July 31, 2009.

Photographer Hiromi Watanabe captured some really stunning photos of the ACROS for Ambasz and Associates – this is probably his most famous below.  We featured this photo of the ACROS in our 2008 Greenroofs of the World™ Calendar:

The $380 million award-winning (Business Week / Architectural Record Award, 2000; DuPont Benedictus Award, 2001; and the Japan Institute of Architects Certificate of Environmental Architecture, First Prize, 2001) ACROS is 60 meters high with 14 floors above ground and four below – and one of the largest buildings in the world whose surfaces are covered in greenery. Due to its shape on the park-facing southern side, it’s not surprisingly also called a “step garden.” It consists of 13 levels with widths between 120 to 98 meters (depending on the level), a depth of six meters, and with 76 varieties of 37,000 short trees planted ranging in height from 1.7 to 1.9 meters.

As you can imagine, its monumental green beauty is just one of its many beneficial features. In September 2000, the Takenaka Corporation, Kyushu University, and Nippon Institute of Technology jointly carried out a thermal environment measurement survey, proving that rooftop gardens are effective in alleviating the urban heat island phenomenon:

“The thermal environment measurement survey was conducted on the step garden by collecting data from longwave and shortwave radiation meters, ultrasonic three-dimensional wind speed and temperature meters and scintillometers set up on the top, tenth, sixth and fifth levels.” ~ Heat Island Phenomenon Proven to Be Alleviated by Rooftop Greening, Takenaka Corporation

The study found the following: a difference of 15°C between the surface temperatures of the concrete, coming to the obvious conclusion that the greenery and greening suppresses a rise in the surrounding air temperature.

Yet sometimes the news of obvious charms is slow coming to the rest of the world:

“…the building is a success in its native land, its terraced south facade utilized by many in the area for exercise and rest, affording views of the city and the harbor beyond.  Unfortunately it has received little press overseas, especially in the United States, a country without Japan’s starvation for usable land.” ~ A Weekly Dose of Architecture, December, 2000 – their early photos below:

That may have been an early sentiment, but for those of us in the sustainable design field, the ACROS has always been a stunning example of sensitive site planning and integration of nature into the built environment, and remains an iconic building of green, blending and blurring the distinction of vertical and horizontal planes. Typical of Emilio Ambasz’s projects, ACROS Fukuoka Prefectural International Hall is a very powerful synthesis of urban and park forms.

Did we miss something? We’d love to hear from you! Click here to see more information about this project in The International Greenroof & Greenwall Projects Database. See how you can submit yours here. 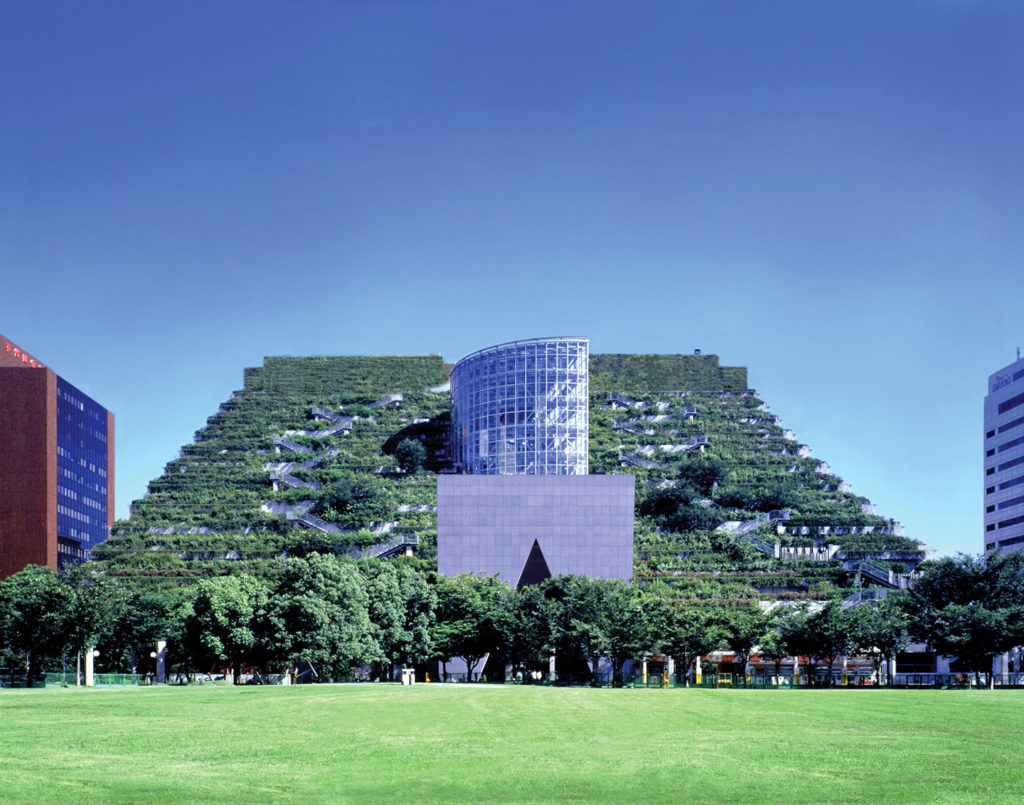