Roofs are turning green all around the Washington DC area.   Every year since 2005, Green Roofs for Healthy Cities (GRHC), a network of public and private organizations promoting the green roof industry, has performed ranked cities by total square footage of new green roof installations for their corporate members.   And every year, Washington DC has been on the list.   In 2006 DC had 301,751 square feet of green roofs, and by 2009 it was approaching two million square feet of green roofs.   What’s behind this dramatic rise?

GRHC points out that municipalities appearing near the top of the list, as Washington DC does in all but 2007, usually have governments that encourage green roofs through policies and programs.   Those governmental efforts are also closely tied to improving water quality.

According to a report by the Casey Trees Endowment Fund and Limno-Tech, Inc.,  DC has to vastly better manage its sewer outflows since the Anacostia, Potomac and Rock Creek Rivers currently do not meet federal water quality standards.   (Publisher’s Note: On a related note, see our 2006  Guest Feature by Gregory Long, RLA.) By an account in the Washington Post, just half-an-inch of rain washes billions of gallons of raw sewage and runoff directly into the Anacostia, mostly because of an outdated storm water system.   The fix on the drawing boards is three underground storm water storage tunnels with an estimated cost of $1.9 billion when the project was first dreamed up, but now closer to $2 billion as the city continues trying to put the funds together.

And while the media coverage for commercial and government green roof projects is robust, the residential scene appears to be a sleeping giant.   A thesis  by Harriet Zipp and Britt Zimmerman found that just by installing green roofs on DC’s many traditional, flat roof, row houses the area could reduce its storm water flows by more than 12 percent.

But water quality improvement is not the only environmental issue DC is trying to address with its green roof build out.  The area lost 64 percent of its heavy tree cover between 1970 and 2000, according to an American Forests, Urban Ecosystems Analysis.   Trees and plant life help to keep the urban environment cooler and also help to clean the air, something that could go a long way toward lowering the city’s high asthma rates.   The Children’s Environmental Health Network and the DC Department of Health, put the area’s asthma rates at 6.5 percent for children and 5 percent for adults in 2004.

The federal government with its large real estate footprint in DC has been keen on green roofs from all perspectives since a series of environmentally-focused executive orders.   From the early beginnings by the United States Department of Agriculture in 2006 on its  1,200 square foot  departmental administration building greenroof  (plus a brand new 3,700 square foot one on their Whitten Building, below), to the Department of Transportation’s 2007 building sporting a 68,000 square foot green roof, the federal government has been setting the example.

Responsible for the natural and indoor environments in the District of Columbia, the The District Department of the Environment (DDOE)  is #2 in the USA for area of green roofs (1 million square feet of installed green roofs).   In 2008 DC’s mayor called for the city to come up with its own green roof demonstration project before the end of the year.   In response, the Reeves Center now supports a 4,000 square-foot green roof and One Judiciary Square has an 8,000 square-foot green roof.

Private organizations and corporations are also heavily investing in green roofs in DC.   Recently, the World Wildlife Fund replaced a decrepit 24-year-old roof with a green roof that is claimed to be the third largest in the city.   The organization received a $7 per-square-foot grant through the American Recovery and Reinvestment Act to fund a portion of the project.   And the American Society of Landscape Architects (ASLA) retofitted their headquarters with a green roof in 2006.

Parking lots offer their fair share of runoff to the overburdened storm water system but in at least one case the parking lot has been replaced by a building with not only a green roof, but one that retains all the storm water from the site.   The Walter E. Washington Convention Center collects and uses that storm water to irrigate the green roof and its street level plantings.

In addition to government and private sector clients, DC is also home to a growing number of community organizations that work to educate citizens about the benefits of going green.   Chief among these in the green roof field is DC Greenworks, a non-profit that works with city residents and builders to promote sustainable building and urban agriculture.   DC Greenworks also helps job seekers train for and connect with green jobs around the area.     You can also check out some of their featured projects here.

So what is it about the Washington area that makes it such a haven for green roofs and other sustainable design projects?   The most important factors seem to be a committed local green building community on the supply side, and a critical environmental need (in this case the Anacostia River runoff water crisis) combined with a healthy dose of government incentives to help stimulate the demand side.   The federal government is certainly a major player on some projects, but by no means the only game in town. 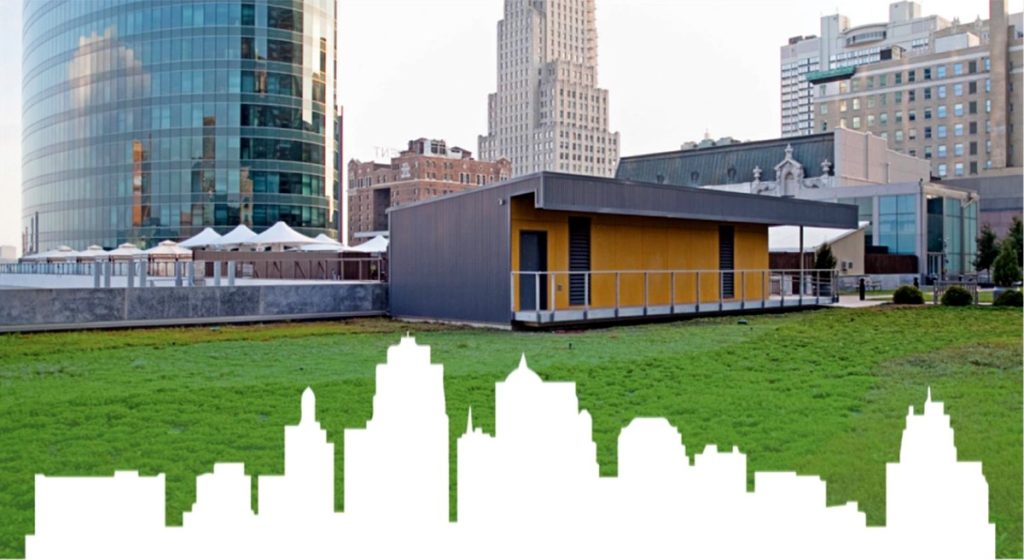